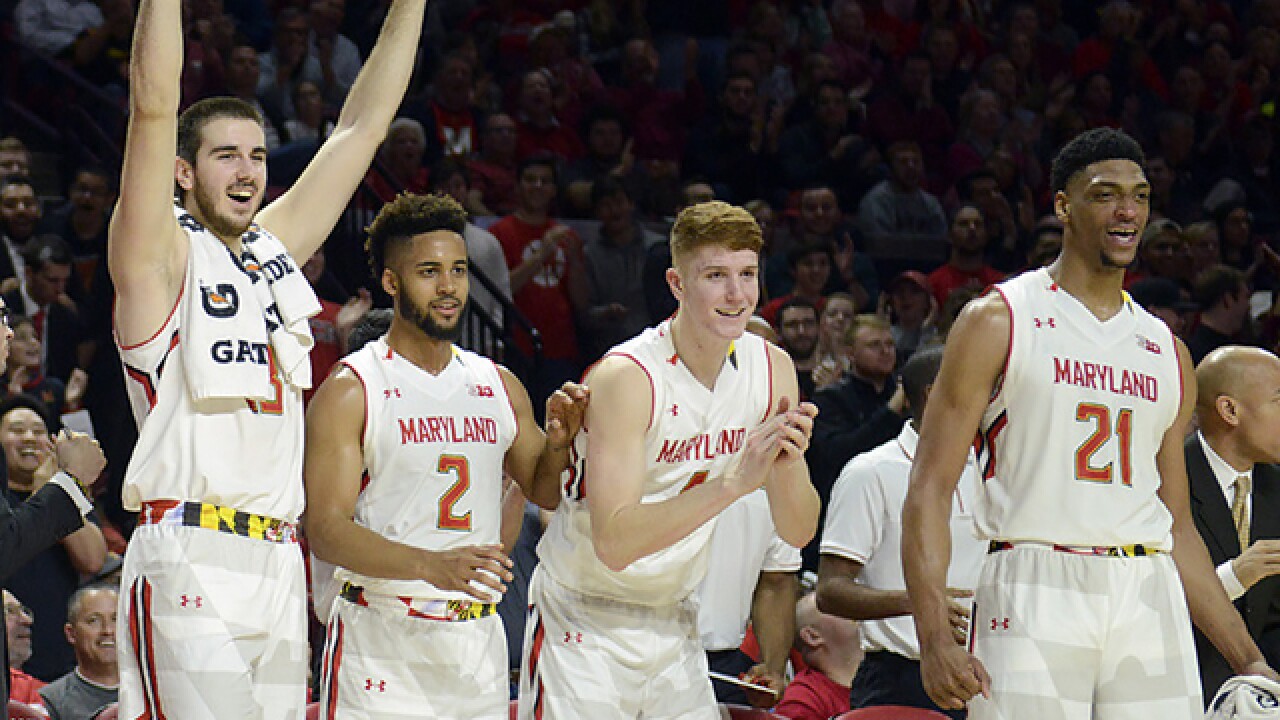 Freshman Kevin Huerter hit a clutch 3-pointer with 1:46 left, and Maryland got 18 points from Melo Trimble in a 75-72 victory over Indiana on Tuesday night.

A back-and-forth Big Ten duel came down to one final shot, a 3-point try by Indiana's Robert Johnson that clanged off the rim as time expired.

Anthony Cowan scored 15 points and Huerter had 11 for the Terrapins (15-2, 3-1), who have won two straight since blowing a 12-point lead in the final six minutes at home against Nebraska.

Indiana trailed 66-63 before Blackmon made a layup and a 3-pointer. Maryland center Damonte Dodd answered with a put-back of a Trimble miss, but two free throws by Juwan Morgan put the Hooisers back in front.

That's when Huerter took over. After drilling a 3-pointer from deep on the left side, he snagged a rebound on the other end and whisked an outlet pass to Cowan, who made a layup for a 73-70 lead.

OG Anunoby followed with a dunk, and Trimble made both ends of a 1-and-1 with 8.2 seconds to go before Johnson's miss.

After his jumper from the left side bounced away, Johnson slumped to the floor in agony.

Blackmon sandwiched a pair of 3-pointers around a Maryland layup to give the Hoosiers a 55-50 lead with 12:09 remaining.

Trimble responded with a twisting drive that faked Indiana's Juwan Morgan off his feet. But every time the Terrapins got close, Indiana had an answer.

The Terrapins finally closed the gap, using layups by Cowan and Trimble to pull even with 7 minutes to go.

A first half that featured five ties and nine lead changes ended with Trimble driving for a layup at the buzzer to put Maryland in front 39-38.

The Terrapins led 21-14 and 34-29 before the Hoosiers rallied behind Blackmon, who scored nine points before the break.

Indiana: The Hoosiers have fallen from the Top 25 and don't appear heading back anytime soon.

Maryland: This comeback win keeps the Terps in the thick of the Big Ten race, but they have a lot of growing to do before joining the conference elite.

Indiana: Hosts Rutgers on Sunday afternoon. The Hoosiers are 4-0 against the Scarlet Knights.

Maryland: At Illinois on Saturday in a rematch of Dec. 27 matchup that the Terrapins won 84-59.