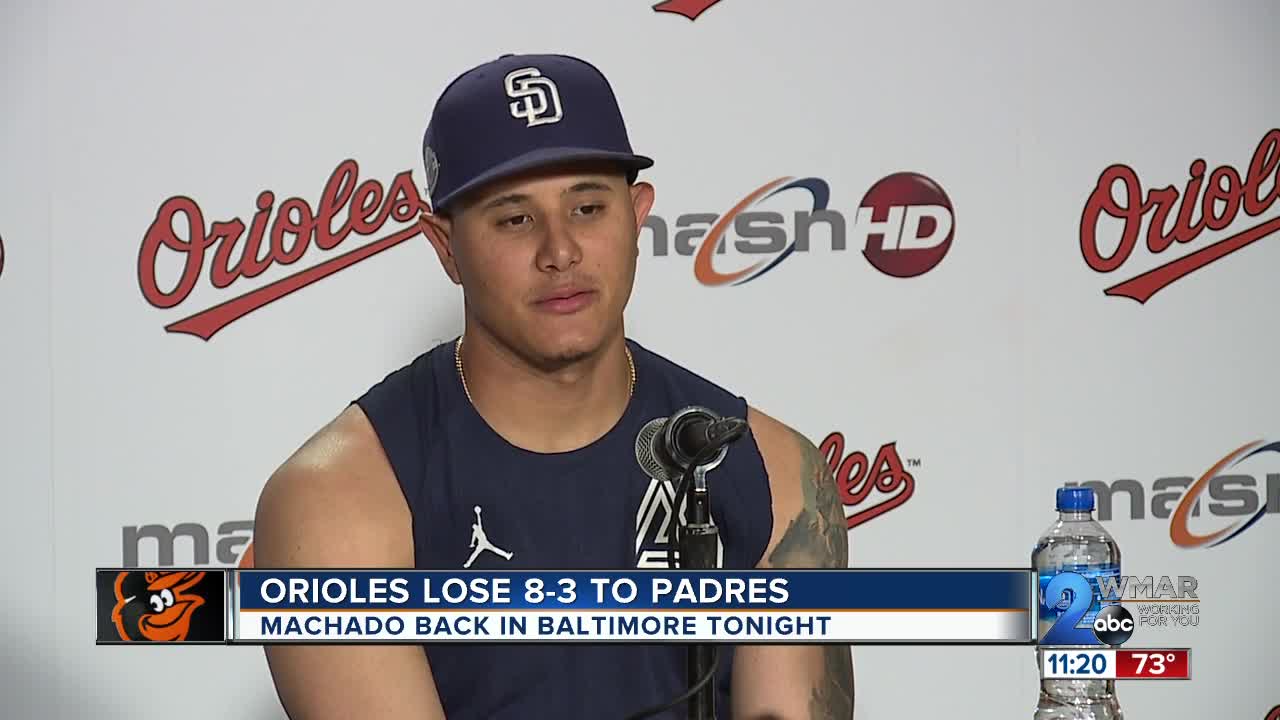 Orioles lose 8-3 to the Padres on Tuesday night as Machado returns to Baltimore.

BALTIMORE — After the faithful fans showered Manny Machado with cheers and love, the former Baltimore star made himself right at home — again — at Camden Yards.

Machado marked his return with a performance reminiscent of his time with the Orioles, hitting a long homer and driving in two runs to help the San Diego Padres roll to an 8-3 victory on Tuesday night.

Machado played seven years with the Orioles before being traded last July, months before becoming a free agent. The third baseman signed a 10-year, $300 million contract with the Padres in February.

Playing in the stadium where he made his major league debut in 2012, Machado received a standing ovation from many in the crowd of 21,644 before striking out in the first inning.

In the third, however, he hit a shot off Jimmy Yacabonis (1-2) that traveled an estimated 455 feet. One inning later, he drilled a run-scoring single to left field.

“It was awesome,” Machado said. “I came back, and like always, the fans did not disappoint. It was good to come back home.”

Before the game, Machado said he was “weird nervous.” Afterward, he cherished yet another memory forged at his favorite stadium.

“I didn't know what to expect. They go above and beyond. It was truly something special that I'll never forget,” he said. “It was just amazing. The fans gave me a standing O. It tells you everything about the fan base here.”

The home run was Machado's 100th at Camden Yards. The 2010 first-round draft pick has a 12-game hitting streak and an RBI in a career-high eight straight games.

Extending those streaks in Baltimore was a nice bonus.

“He loves this city. He loves the people of this city,” San Diego manager Andy Green said. “To come back immediately and to do what he did today, to homer, I know it meant a lot to his family. It's fun to watch a really good person experience a really good day.”

On a night the Padres snapped a three-game skid, Machado had plenty of help. Manuel Margot homered and drove in three runs, and Fernando Tatis Jr. and Francisco Mejia also went deep.

“I struggled a little bit at first but I kind of got into a rhythm,” the lefty said. “Obviously, my teammates picked me up with eight runs.”

Richie Martin homered and Hanser Alberto matched his career high with four hits for the Orioles, who trailed 7-2 in the fourth and lost for the 12th time in 13 games.

First-year manager Brandon Hyde wasn't around when Machado shined in Baltimore, but he could appreciate the ovation provided to the former Oriole.

“I thought that was a really nice ovation for him,” Hyde said. “That was well deserved for a great player, incredibly talented, somebody who's done a lot here in a lot of big games here. It was pretty cool.”