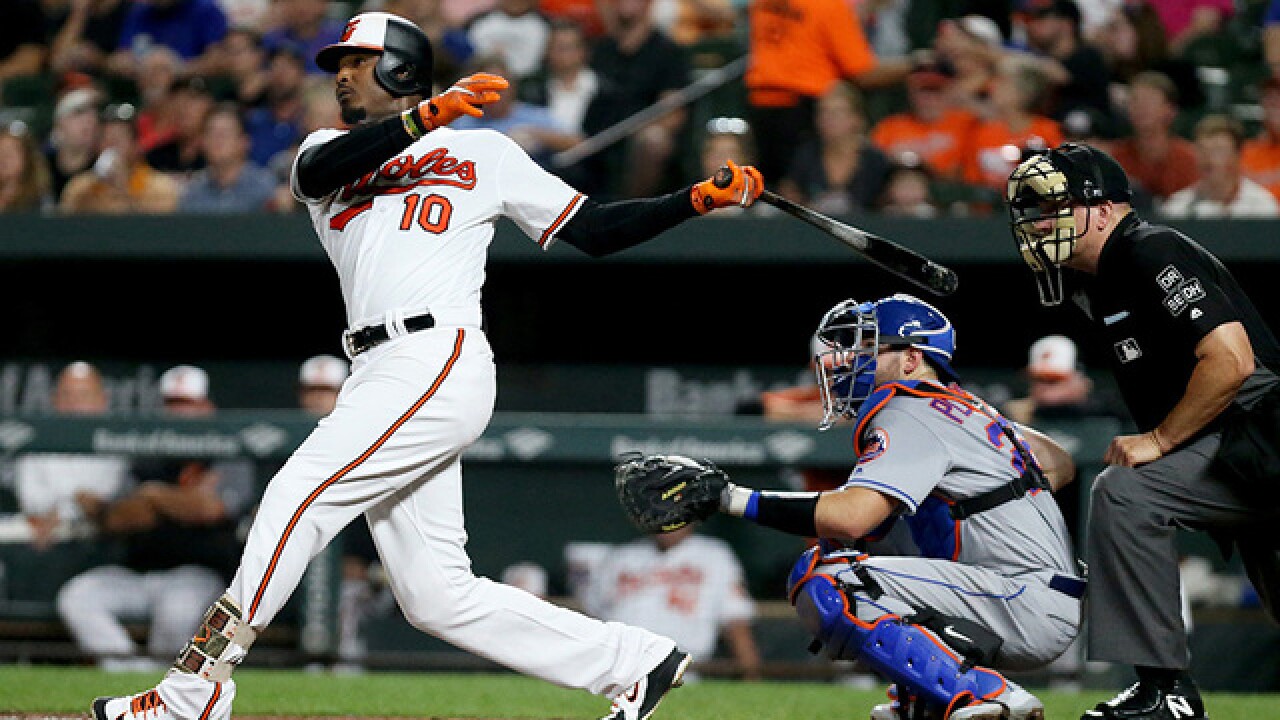 Copyright 2018 Scripps Media, Inc. All rights reserved. This material may not be published, broadcast, rewritten, or redistributed.
<p>The Orioles topped the Mets 6-3 Tuesday night at Camden Yards. Chris Davis nudged his paltry average a little higher with a 2-4 night that included a home run. Adam Jones also went 2-4 with a long ball. The O's are 3-0 against the Mets with another match up Wednesday night in Baltimore. <em>(WMAR 2-News photo by Zach Babo)</em></p>

Jones will be recognized with the 2018 Louis M. Hatter Most Valuable Oriole Award during an on-field ceremony prior to Sunday's season finale game against the Houston Astros. First pitch is scheduled for 3:05 p.m.

So far this season, Jones has hit .281/.313/.419 with 33 doubles, 15 home runs, 54 runs scored, and 62 RBI. He ranks third among American League outfielders in three+ hit games with 17. On opening day, Jones became the first player since Ken Griffey Jr. to make 11-straight season starts at center field for the same team. He hit is 250th career home run on April 3, and he is currently fifth on the O's all-time home run list.

Jones has showed maturity and flexibility, playing both center and corner outfield as the Orioles used their disappointing season to bring up young players in the hopes they develop into the stars of the team's future.

Jones was honored with the award in the same week he and his wife Audie made a substantial contribution to Baltimore charities. In conjunction with the Baltimore Orioles Charitable Foundation, the Jones's gave $150,000 to six local nonprofits.

“These incredible organizations are doing amazing work to empower Baltimore’s youth, which has always been our top priority,” said Jones. “Audie and I personally met with each of these groups and we were so inspired by their various missions. We know that educational opportunities are critical for inner-city children, and we are proud to support causes that will help these kids achieve academic success, develop financial literacy, and ultimately, pursue higher education.”