Md. Department of Labor: More than 95% of unemployment claims processed 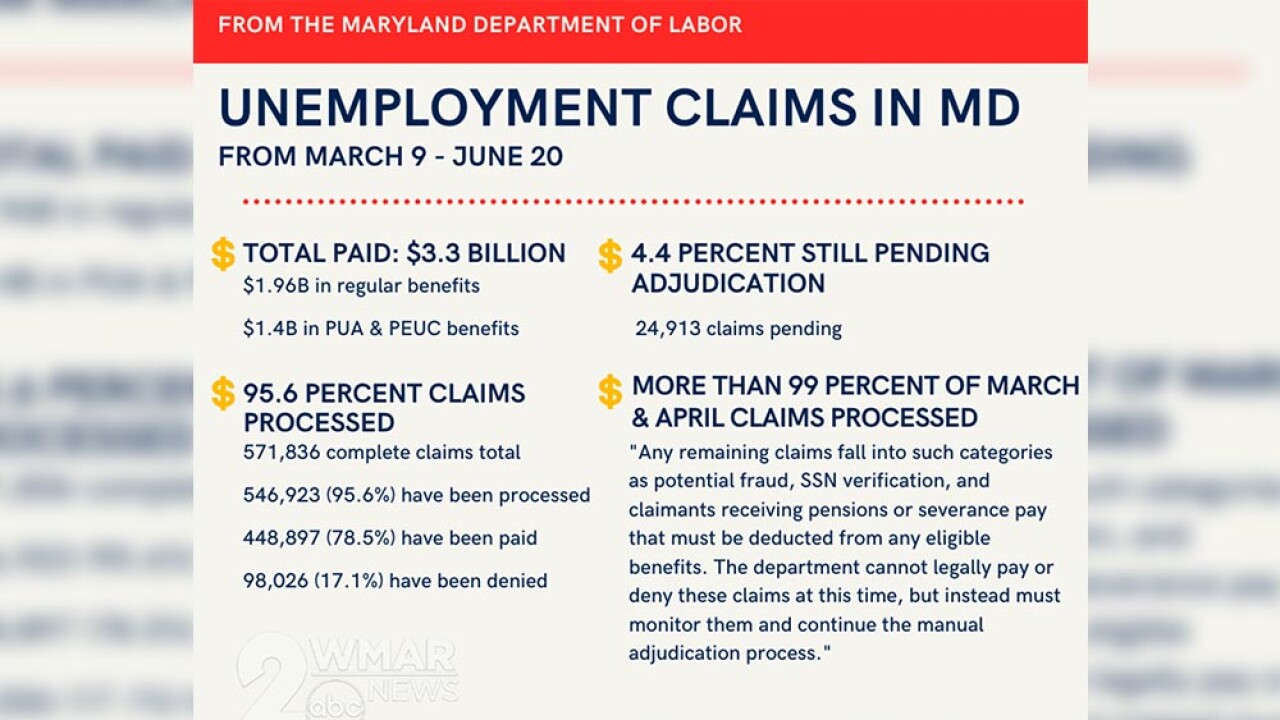 More than 95% of unemployment claims in Maryland have been processed, resulting in over $3.3 billion in benefits payments, the Maryland Department of Labor said Thursday (June 25).

From March 9 through June 20, the department received and processed 571,836 claims. Of those -- 448,897 (78.5%) were approved to receive unemployment benefits, while 98,026 (17.1%) were denied. The large majority of denials were because the applicant and their most recent employer had differed on the reason for unemployment or they made too much.

The other remaining cases are pending adjudication, which in the last week has been cut by 28% to just 24,913 (4.4%). These claims have one or more issues currently blocking applicants from receiving payments.

In March and April alone, more than 99% of claims have been processed The only exceptions are those cases of potential fraud, social security number verification, and conflicts with pensions or severance pay that needs to be deducted before benefits are paid.
For employers who have a valid Maryland account number and FEIN, they can now more easily report those refusing to return to work when offered, by clicking here.

(JUNE 18, 2020) - The Maryland Department of Labor provided an update about the significant progress made in the processing and payment of unemployment insurance claims during the coronavirus pandemic.

Of the claims that have already been denied, the large majority were denied because claimants had issues related to the separation from their most recent employer or were determined to be monetarily ineligible.

Labor has cut the adjudication backlog by more than half over the last week, and there are currently 34,663 (6.5%) claims pending in adjudication. These claims have one or more issues blocking claimants from receiving payment that are being resolved by UI professionals.

From March 9 to June 13, the Maryland Department of Labor’s Division of Unemployment Insurance paid a total of $2,703,939,944 regular and CARES Act unemployment insurance benefits to claimants.

RELATED: Questions about Maryland unemployment? We have answers.

The agency says its paid out over $2.2 Billion in unemployment benefits, from March 9 to June 6.

The other 96,537(18.2%) applicants were denied largely because of issues on why or how the applicant became unemployed from their last job.

Currently there are 70,804 (13.4%) claims awaiting final approval or denial. Those claims have one or more problems blocking applicants from receiving payment.

By the end of the week, the department plans to implement an IT solution that would streamline over 78% of those claims still being adjudicated.