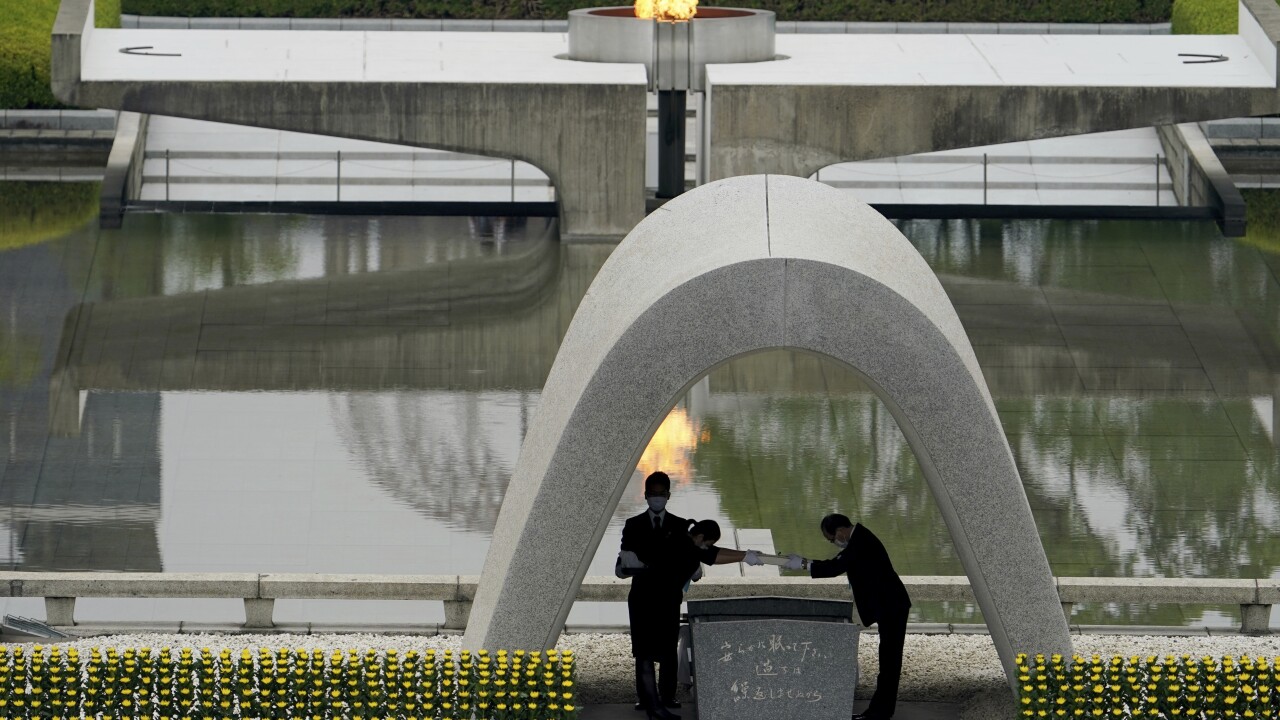 Copyright 2020 The Associated Press. All rights reserved
Eugene Hoshiko/AP
Kazumi Matsui, right, mayor of Hiroshima, and the family of the deceased bow before they place the victims list of the Atomic Bomb at Hiroshima Memorial Cenotaph during the ceremony to mark the 75th anniversary of the bombing at the Hiroshima Peace Memorial Park Thursday, Aug. 6, 2020, in Hiroshima, western Japan. (AP Photo/Eugene Hoshiko)

HIROSHIMA, Japan (AP) — The city of Hiroshima in western Japan is marking the 75th anniversary of the U.S. atomic bombing.

Japan surrendered on Aug. 15, ending World War II and the Japanese aggression in Asia that lasted nearly half a century.

Hiroshima was a major Japanese military hub with factories, military bases and ammunition facilities before the bombing.

An estimated 140,000 people, including those with radiation-related injuries and illnesses, died from Aug. 6 through Dec. 31, 1945. That was 40% of Hiroshima’s population at the time. Hiroshima today has 1.2 million residents.

Thursday, survivors of the Hiroshima bombing gathered in diminished numbers to mark the anniversary. They urged the world, and their own government, to do more to ban nuclear weapons.

The coronavirus meant a small turnout, but the survivors’ message was more urgent than ever.

Survivors want younger generations to learn their lessons while they are still around.

As a girl, Koko Kondo had a secret mission: Revenge against those who dropped the Aug. 6, 1945, atomic bomb. She has overcome her hatred, as well as humiliation and discrimination.

Kondo now is a peace activist following in the footsteps of her father, Rev. Kiyoshi Tanimoto, one of six survivors featured in John Hersey’s book “Hiroshima.”