Seal slaps Australian kayaker in the face with an octopus 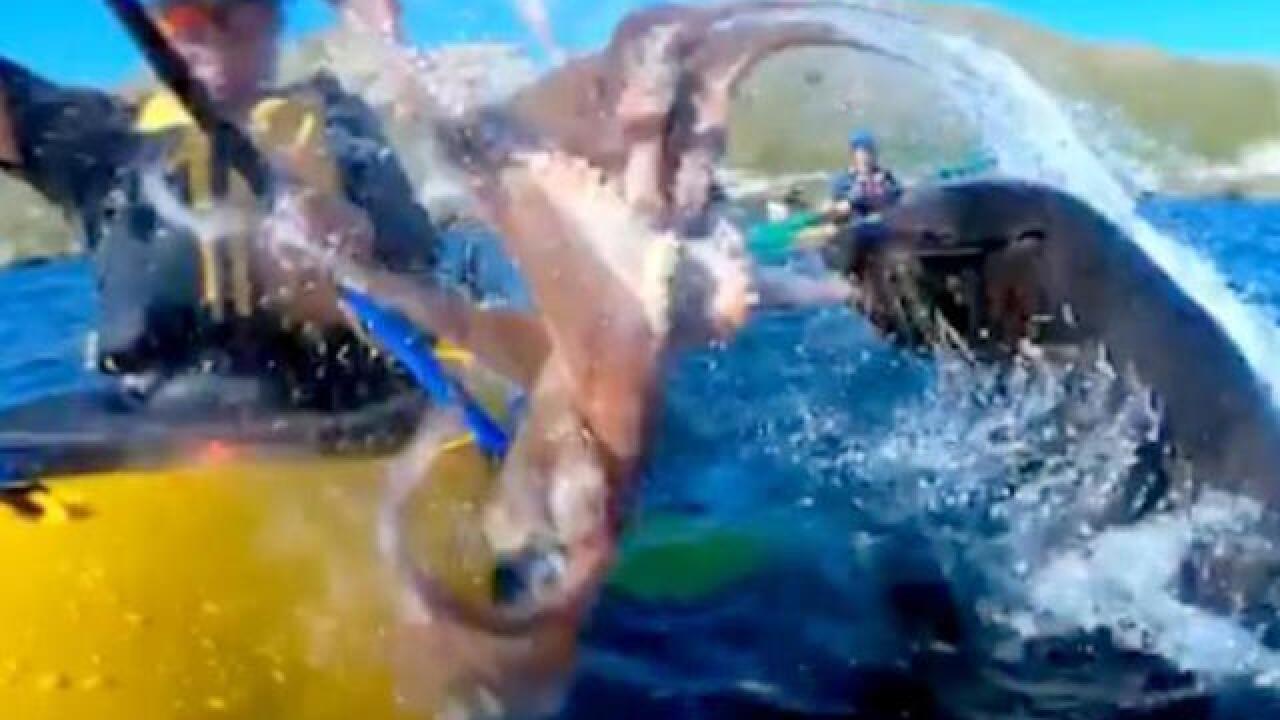 Well, that was a slap in the face.

An Instagram user has uploaded video that shows a seal swimming up from the depths, armed with an octopus, which it flings across the face of an unsuspecting kayaker.

Geo-tagged off the coast of Kaikoura on New Zealand's South Island, paddler Kyle Mulinder, along with a number of other kayakers, is seen on the footage watching a seal swim underwater, hunting the octopus.

As they chat about the seal, it can be seen surfacing next to Mulinder's kayak, before launching out of the water, prey in mouth, to deliver an almighty slap to the Kiwi.

Mulinder is momentarily taken aback by the attack before shouting out in surprise.

His friend, Taiyo Masuda, told CNN it was a "beautiful day (and) seals were swimming and enjoying sun on the rocks.

"Right around lunchtime, several seals started to swim around. We just thought they were refreshing their body, yet apparently they were seeking more of food.

"One seal swims right next to us, having an octopus in his mouth, pops right up of the surface next to us, then tries to chew up the leg but ended up slapping our face!

"We instantly started laughing, we certainly got surprised. We are all adventure guys but we don't encounter that every day! Such a raw moment, brought us so much laughter to all of us all day long... What a day to remember!"

The octopus stuck around -- literally -- suctioning onto the bottom of Mulinder's kayak until it was prized off by a fellow kayaker's oar. It then disappeared underwater.

"I was like 'mate, what just happened?' It was weird because it happened so fast but I could feel all the hard parts of the octopus on my face like 'dum dum dum'," Mulinder told CNN affiliate Seven News Australia.

Mulinder and Masuda, who were sharing the two-man kayak, both posted the incredible footage to Instagram.

"I'm not sure who got more of a surprise -- the seal, the octopus or me," the caption on Mulinder's post reads.

Masuda posted: "(Mulinder) getting octopus smashed into his face by a seal? ...(most) amazing kayak ever!"

The seal reappears around the flotilla of kayaks a couple more times before disappearing back into the depths, possibly to rearm with another cephalopod and go back on the offensive.

Both Mulinder and Masuda identify themselves as affiliated with action camera maker GoPro, and some of the video posted was cut into a slick production, branded with the camera's logo. They said they were testing the maker's latest model when the incident occurred.

The video caused a sensation on social media, with users comparing themselves to the hapless octopus, the seal or to Mulinder -- or all three.

"I'm the kayaker, the octopus is the news cycle," she tweeted.