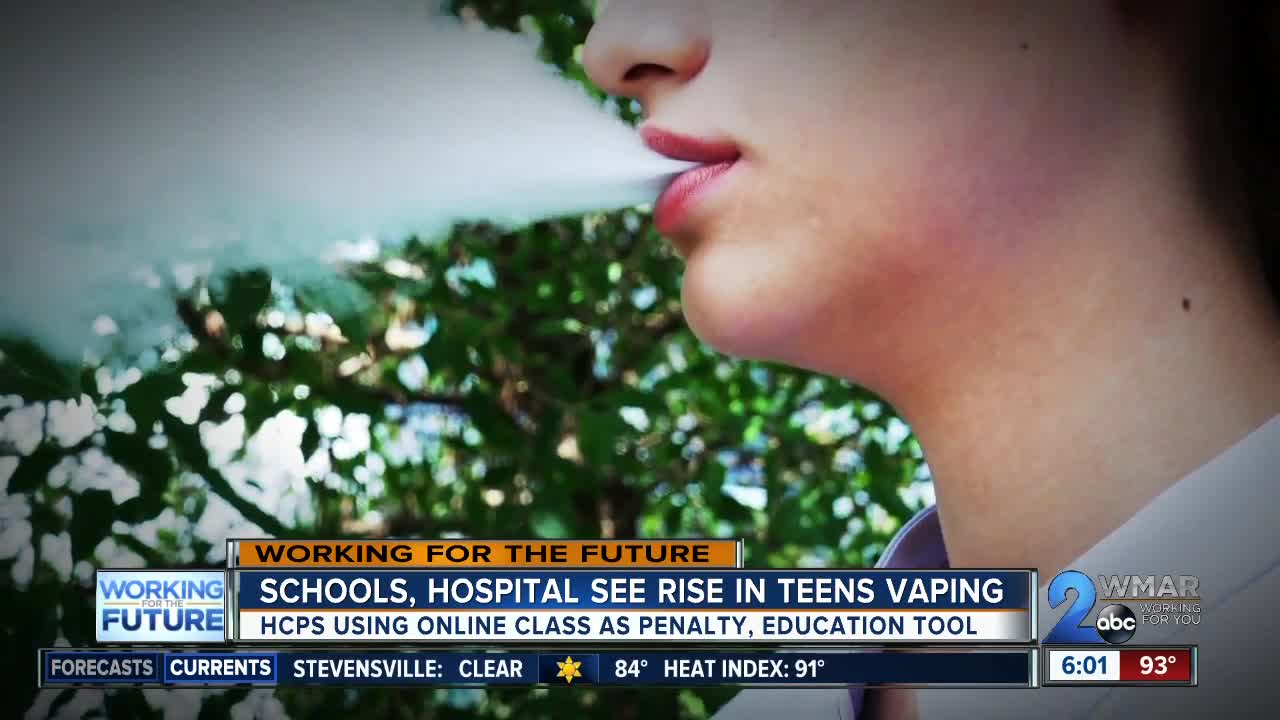 Harford County Public Schools has changed the way they discipline students caught vaping, as the number of students participating more than doubled in one year.

BALTIMORE — Six deaths nationwide have been linked to vaping, health officials said. The CDC has also identified about 450 possible cases in 33 states of serious breathing illnesses in people who use e-cigarettes and other vaping devices.

The scary thing for parents too is that these devices are getting more popular in schools and a Johns Hopkins pulmonary care doctor believes it's because of misinformation.

"That's what breaks my heart. That's what bothers me every day. I feel like I'm battling a campaign of misinformation before the next person dies," said Dr. Panagis Galiatsatos.

As the director of the hospital's Tobacco Treatment Clinic, Dr. G works with lots of patients. More recently, he has met with teens and young adults using e-cigarettes.

"They felt like there were safe products to begin with," said Dr. G. "So the judgment a lot of people use is based on misinformation and that is putting a lot of lives at risk."

Though research is just starting, health officials believe vaping hurts the lungs through chemical exposure. Many of the reports nationally involve severe, life-threatening illnesses in previously healthy people. Some of the teens Dr. G has met with want to quit because they've heard about those impacts. Others are experiencing them... and from something they didn't think twice about using.

It's not just a problem being addressed by the medical field. School systems are working to increase education.

"We are responsible, not only for the academic well-being of our students, but the health well-being as well," said Harford County School Board member Dr. Roy Phillips.

He asked at Monday night's meeting about what is being done to education students about the harmful impacts. The director of Student Services described their new approach to an uptick in usage.

Buck Hennigan said before the 2018 school year, an average of 65 HCPS students were caught smoking in school per year. Those students were referred to an in-person education class with the county's health department to avoid suspension.

But he said last school year, the amount of students caught more than doubled to 200 and most involved vaping.

"We've had to change course due to the demand because we are having so many more students using inhalants and vapers than we were with cigarettes," said Hennigan.

The health department couldn't provide enough classes for all the students so this year, they created an online class that all students caught violating the tobacco and inhalant-free policy have to take to avoid suspension.

"I applaud Harford County for taking this reaction but I really think we can't be reactive. We have to be preventative. We need to get this education out to middle schoolers to the elementary school kids. Give them insight and tools to manage peer pressure," said Dr. G.

Even more, Dr. G would like to see the CDC put a pause on the selling of these products until more research is done

"I know that's a very big extreme and it probably would impact a lot of economics, but I can't sit idling on the sideline and watch another patient die, another family lose a child because the medical community is not putting the pressure that it needs to," said Dr. G.