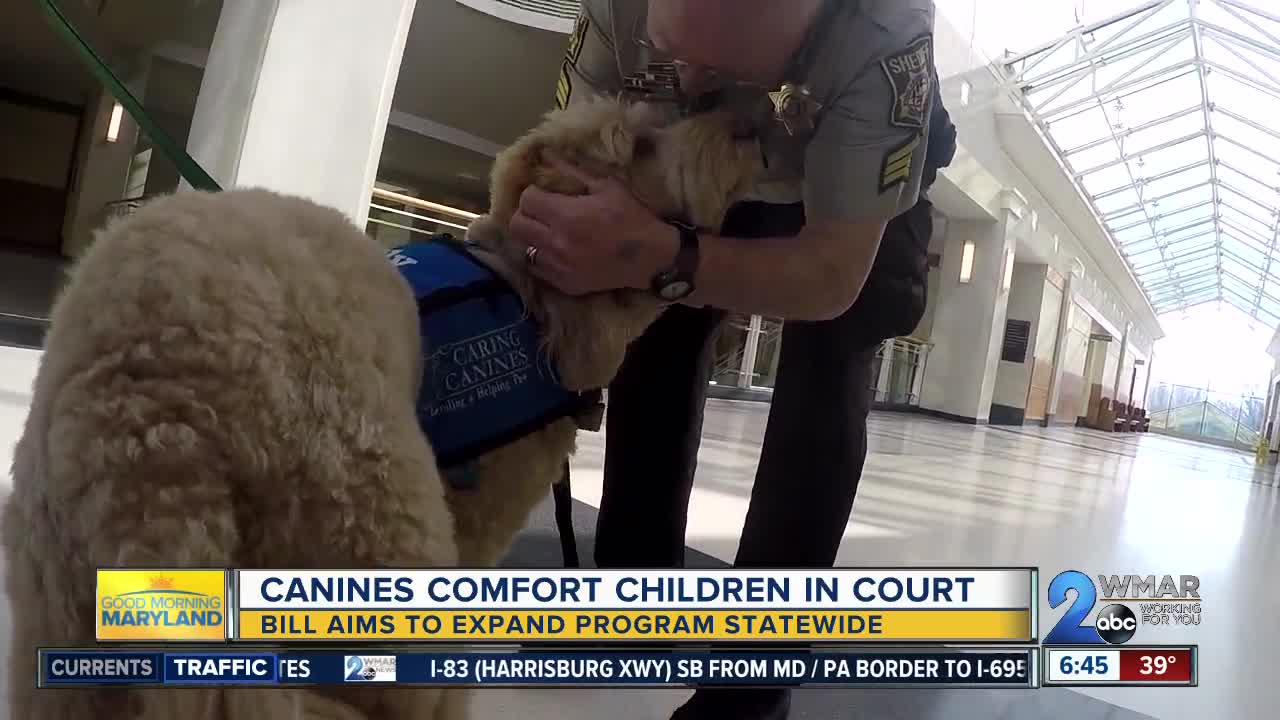 In two counties in Maryland, therapy dogs are allowed to accompany child witnesses during court proceedings to bring them comfort and peace. The General Assembly is considering a bill to expand the program statewide. 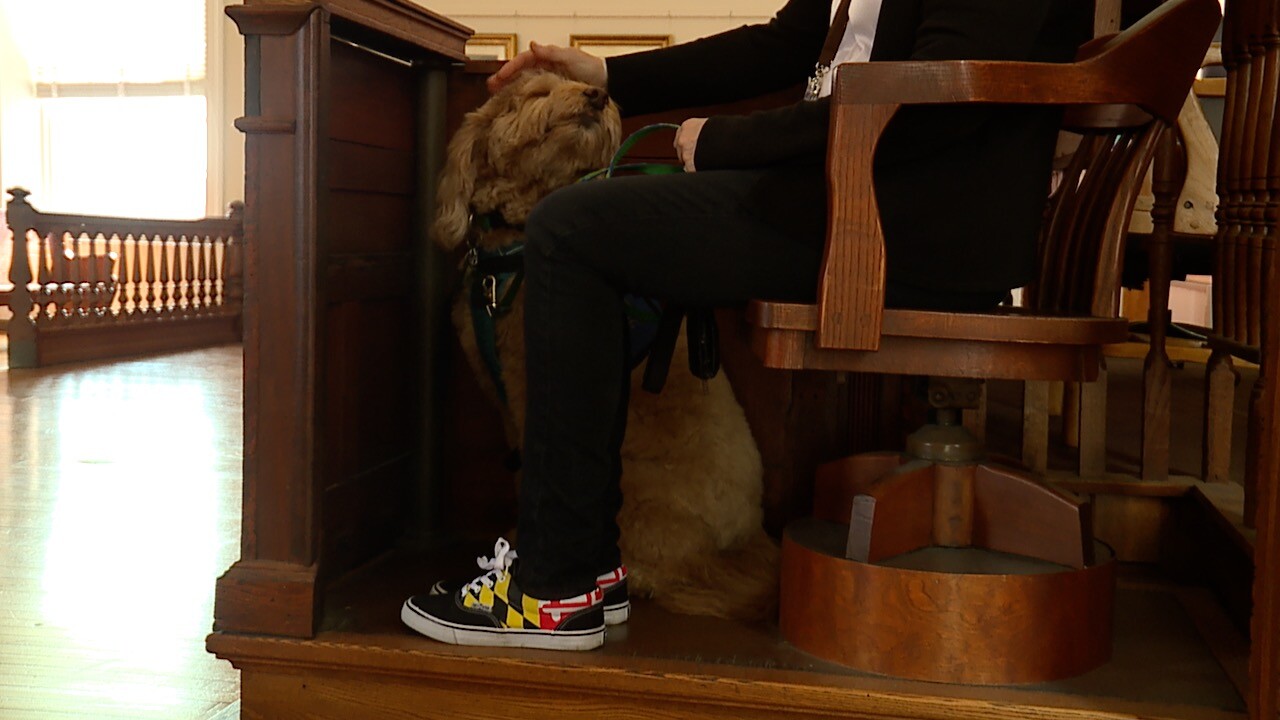 ANNAPOLIS, Md (WMAR) — They're called mans best friend for a reason. Aside from the health impacts of owning a dog, like decreased blood pressure and cholesterol, there's the comfort factor. Now, canines are bringing it into several Maryland courtrooms to help the most vulnerable victims: children. The program making that difference is on the verge of expanding.

"It's amazing to see what dogs can do for everybody," said handler Barbara Reilly.

Reilly and Lily her 5-year-old Labradoodle stop by Anne Arundel County Circuit Court at least once a month. Lily meets the staff and practices for the next time she is needed. They are part of the Court Dog and Child Witness pilot program, which launched in Anne Arundel and Harford counties two years ago, allowing comfort dogs for minors in civil of criminal circuit court proceedings.

A few months ago, Lily made history as the first comfort dog used during trial in Maryland. She took the stand with a young girl who was testifying against her now-convicted abuser.

"I think she was really able to put the witness at ease. She could sense when she was talking if she was getting upset, she would put her face in her lap and it just allows a person to kind of decompress, take a couple breaths and you know relax a little bit to be able to tell their story," said Reilly.

Ripken considers each written request made on behalf of a child. Each year, they've gotten more applications. She's now approved 18 of them, only denying one because the victim did not meet the age criteria for the statute. The dogs can be used in divorce proceedings, meetings with the judge, pre-trial hearings or during trial.

During a case with a jury, like when Lily took the stand last year, Ripken said ideally the dog is placed out of sight. If it's not possible, they have created a specific jury instruction.

"You would have the jury not in the courtroom. You would bring the child witness and the dog into the courtroom, get them all situated and comfortable and then bring the jury in," said Ripken.

Riken said the benefit, assistance and comfort far outweighs the minimal cost for the court.

A program on the verge of a big expansion.

"This will make it go statewide," said Sen. Bryan Simonaire.

Simonaire sponsored the legislation for the original pilot program in 2016 and this session, he has sponsored bipartisan legislation so that any child witness across the state could request a therapy dog for circuit court proceedings.

"It's voluntary so not every jurisdiction has to be part of this program but they can be and it provides a framework for them to set this up that the dogs can come into the court," said Simonaire. "It's amazing what these dogs can do and just bring a calming effect and not only that, it helps bring out the truth."

The bill also ensures the dogs and handlers are well-trained. Lily and Barbara went through a pet therapy program for three years and now work with Dogwood Acres Pet Retreat Caring Canines program, connecting the court and other facilities with certified dogs.

She, along with other advocates and facility dogs Manny and Josiah, testified in support of the bill at a committee meeting in January.

"These animals in action are a wonder to behold. You have to think about a child who has experienced some of the worst trauma in their entire lives coming in and having to talk to strangers, having to relay that information again to investigators in a forensic interview and having a non-judgmental creature there to support them throughout that endeavor, I think is critical to making sure that these traumatized witnesses are effective in their disclosure of their testimony," said Harford County Deputy State's Attorney Gavin Patashinick.

The Department of Legislative Services estimates the program would add minimal if nay costs for the state and counties that participate, adding that AACo reported no costs associated with the pilot program.

"The bulk of the work is done by the parties and certainly the dogs and the handlers and it's very little impact on the court," said Ripken.

Governor Larry Hogan recently hosted therapy dogs for an event announcing his support for the bill, which passed out of the Senate and is sitting in the House waiting for a hearing.

"It's just an amazing program. I'm glad that we were able to be involved with it," said Reilly.