According to data released by the Maryland State Department of Education, 72.2 percent of the 5,195 students in the class of 2018 graduated within four years, a 1.5 percent gain from 2017.

That 1.5 percent gain is one of the largest in more than five years, and data indicates that since 2010, the four-year graduation rate has increased 10.7 percentage points overall. 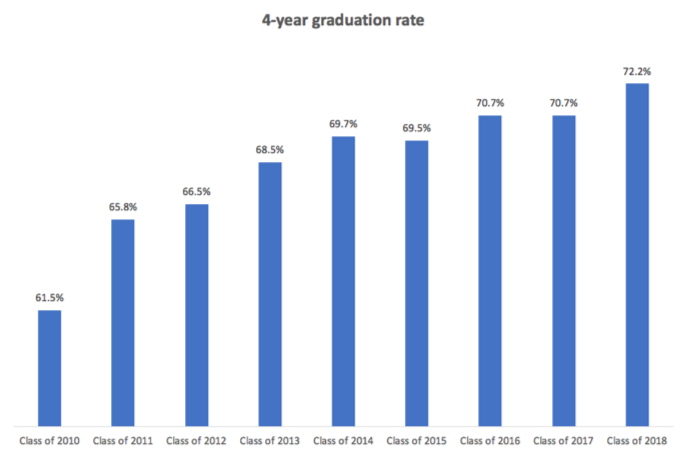 “I’m pleased to see all of our student groups graduating at higher rates,” said City Schools CEO Sonja Brookins Santelises. “Since we launched our blueprint for success last year, our work has included strengthening opportunities for young people to participate in real-world experiences, more rigorous academic programs, and more enriching in-school and after-school activities. When we meet students’ needs and interests, they are more motivated to be in school, they take more ownership of their learning, and they make stronger connections to their school communities. There is a lot of work ahead, but we are heading in the right direction.”

And as the city school system continues to see more students graduating, they are also seeing fewer students dropping out, according to the state's data. The dropout rate decreased slightly from 15.9 percent in 2017 to 15.0 percent in 2018. Dropout rates decreased across all demographic groups of students, other than students with disabilities.

“City Schools is on an upward trajectory,” said Cheryl Casciani, chair of the Baltimore City Board of School Commissioners. “We saw gains on the statewide PARCC assessments at the beginning of the year, and these improvements in graduation and drop-out rates give an indication that students at all grade levels are benefiting from our deliberate focus on excellence and equity. As implementation of our blueprint continues, I’m looking forward to even more success for our students and schools.”

Data was also released that showed the five-year graduation rate, which has remained steady since 2014 at just under 75 percent.