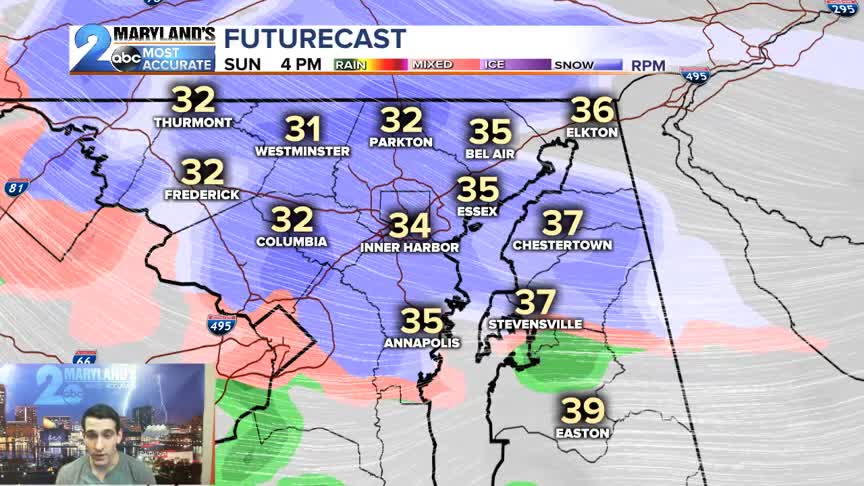 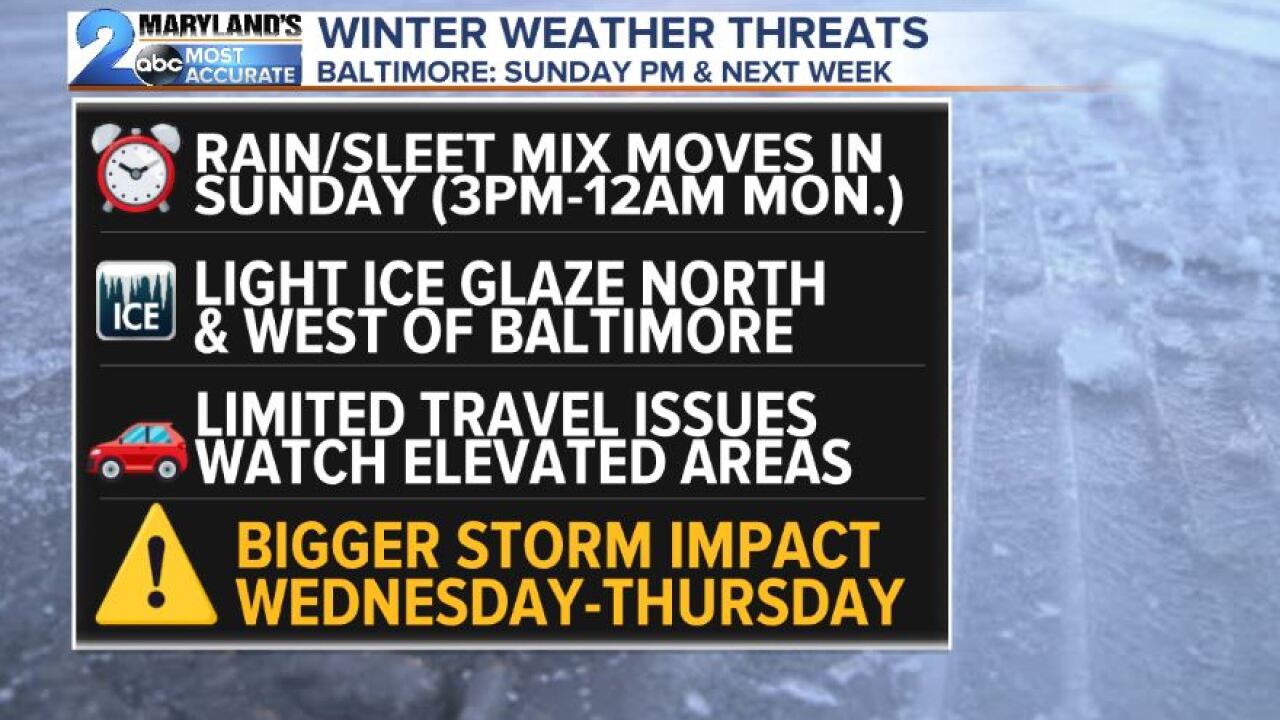 Blue skies and sunshine won the battle today with weak high pressure in control shunting a wintry mix to our south across extreme Southern Maryland. As a result the chill returns on northerly breezes around the high with highs today in the upper 30s and lower 40s. Definitely a far contrast to the "Spring Tease" of yesterday which looks to disappear for the new workweek ahead.

On the heels of our "Southern Sliding Mixed Bag" is another storm system that looks to hit us with a wintry mix come Sunday afternoon and evening. This system will tap into some colder air brought down by high pressure along with a little extra moisture pulled from the Gulf of Mexico and Atlantic Ocean.

Once again this will not be much of a problem for the area with minor accumulations under 0.5" in areas north and west of Baltimore. Temperatures look to work in our favor with highs in the mid to upper 30s. One concern is ice though in the form of freezing rain and sleet as the temperature profile warms above. Best bet for brief slick travel would be along I-70 WB and I-83 NB from Parkton to the PA Line especially on those elevated surfaces. Most of us actually look to see a mix of mainly rain and sleet based upon the current modeling of the temperature profile.

-The time table on Sunday's system looks to be between (4pm Sunday through 1am Monday).

-Snowfall totals around a trace with a light glaze of sleet and freezing rain confined to the Catochtin Mountains (US-15 Corridor), I-70 WB (Westminster and Frederick), I-83 NB (Parkton, York, PA, and Hereford Zone), and MD-136 (Monkton, Whiteford, Jarrettsville).

-Minor travel troubles on bridges, ramps and overpasses since these surfaces freeze first. This does not look to be a school delay or closure type of event.

An even bigger storm looks to be in forecast for the Tuesday night through early Thursday morning time frame. As of right now models continue to suggest on a strong pool of cold air remain in place to not only gives us snow but a changeover to a wintry mix of sleet and even freezing rain late Wednesday into Thursday as warmer air moves in.

The further south you go in such places as Annapilis, Easton, and Cambridge you are likely to see a start as snow before a change to a mix then plain old rain. Totals have yet to be determined since the forecast remains several days out and confidence is still on the lower end of things.

So stay tuned as things look to get interesting for the middle of next week. We do know that Winter is not over yet and we still have 32 days to go to get to that finish line we call Spring.