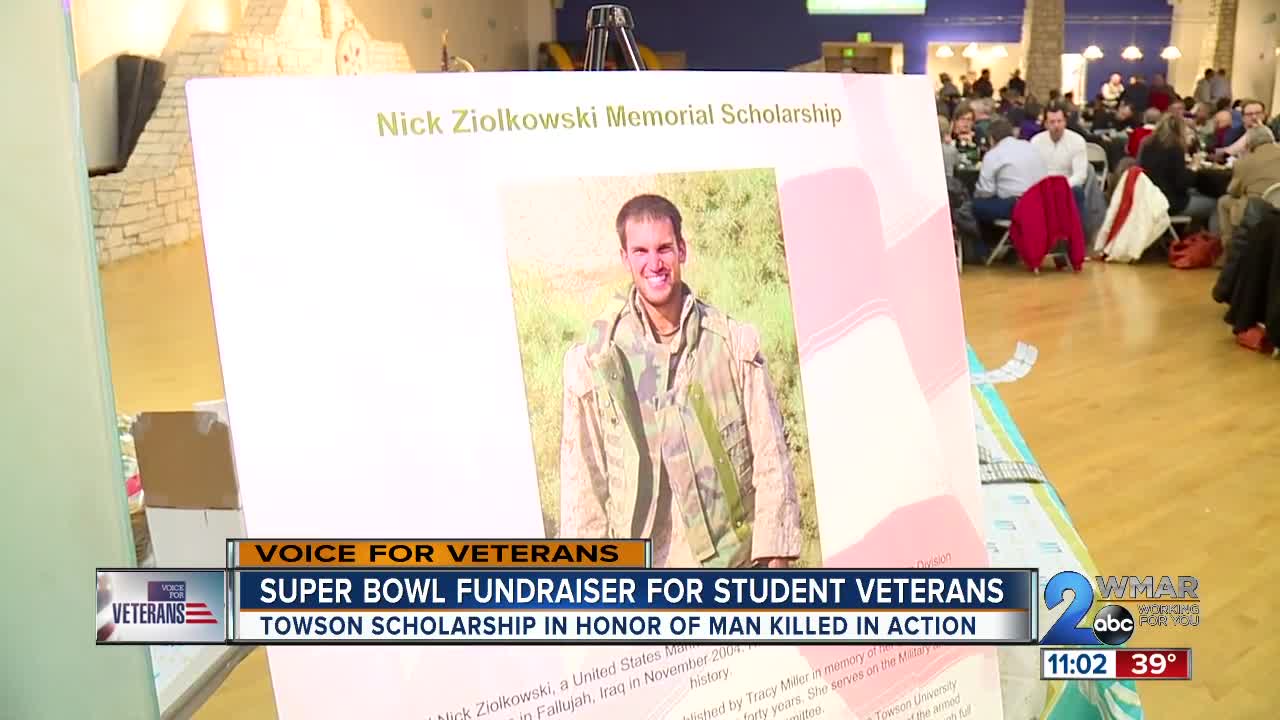 The event has raffles, games and of course the big game on the screen. All of the money raised goes towards one mother's mission to keep her son's legacy alive.

TOWSON, Md. — Tonight, one Super Bowl party had a very special meaning. A couple hundred people gathered at the Towson American Legion to raise money for college scholarships for veterans when they come back home after service.

The event had raffles, games and of course the big game on the big screens. All of the money raised goes towards one mother's mission to keep her son's legacy alive.

Miller's son Nick Ziolkowski joined the United States Marine Corps right out of high school. It had been his dream for years before that.

"He said, 'Because I want to me make sure the world is still here for my children, my grandchildren. See how beautiful this is. I want it to be here'," said Miller.

Three years later, when he was 22 years old, he was shot and killed on a mission in Fallujah in 2004.

"I absolutely was bulled over and I thought I want to do something to make the world a better place because he can’t," said Miller.

He planned on coming back home and attending Towson University after his service, so his mother decided to start a scholarship in his honor, to help other veterans pay for schooling.

More than 22 Towson student vets have received scholarships since she started it 15 years ago.

"This scholarship is so significant to what Towson’s really built on fundamentally," said Dan Crowley, Senior Associate Athletic Director at Towson University.

"I’ve embraced being a veteran. Beforehand, I didn’t want any part of this community and for me, my life has turned around since I got to Towson," said student veteran Rachel Duff.

Duff, an army veteran and the president of the school's Student Veterans group, said that's in part because of Miller's efforts and resources like this scholarship. While veterans can use the GI Bill, this fills in the gaps in coverage and expenses and gives them peace of mind.

"A lot of us are nontraditional. We have families. We have children to take care of so it’s hard enough being a full time student; add on top of that trying to be a full time student and working at the same time. It gets crazy. So being able to use a scholarship like this, especially when your GI Bill runs out, is phenomenon and is such a breath of relief and really can make the difference of whether a veteran gets to finish their education or not," said Duff.

Click here for more information on how to donate or apply for the scholarship.