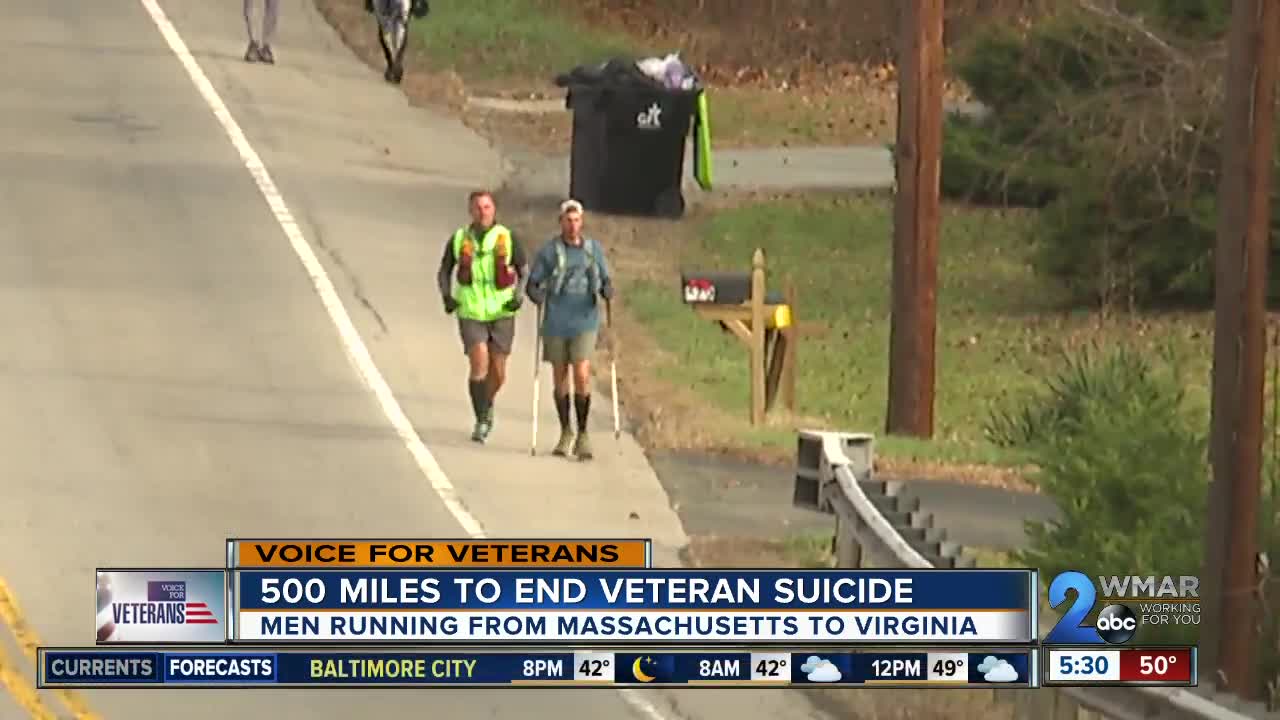 Two runners are on a mission: to run 500 miles from Massachusetts to Virginia to raise awareness about veterans suicide.

BALTIMORE — Two runners are on a mission: to run 500 miles from Massachusetts to Virginia to raise awareness about veteran suicide.

"Unfortunately, over 20 veterans a day take their own lives and when me and Brian came up with this crazy idea to run 500 miles, it was to do something so absurd that it forced people to look," said runner Josh Milich.

Milich and Brian Tjersland started at the Massachusetts National Cemetery on Veterans Day (November 11) and will only stop to eat and sleep until they make it to Arlington National Cemetery Friday evening. 500 miles in 12 days.

"As soon as you put your feet on the ground the next morning, you remember, 'Oh yeah I just did that and I'm gonna do it again'," said Tjersland.

They started their Wednesday morning crossing the Pennsylvania-Maryland border, heading for Baltimore. With every step, they are raising money and awareness for Mission 22 , a nonprofit working to combat the veteran suicide rate by funding treatment for things like PTSD and substance abuse.

"Veterans are an under-served demographic in my eye. I think these men and women give us so much day in and day out and I think the average person doesn't do enough to give back and say thank you and we wanted to do that," said Milich.

The pair of Ultra-runners are on far ends of the spectrum when it comes to experience. Brian, a 52-year-old real-estate appraiser, has completed some of the sport's most iconic and difficult races including Bad Water 135 and Western States 100 Mile Endurance Run. Josh, a 29-year-old enlisted member of the United States Coast Guard, completed his first Ultra in November of 2017 and has recently achieved his goal to finish his first 100 mile finish.

Josh and Brian met through the Junk Miles Trail runners group and after spending hours on the trails together noticed they both had something in common. Both runners had a desire to do something bigger than themselves. They wanted to run for more than just a belt buckle or a medal. That's when Josh and Brian teamed up with Mission 22 to begin this story.

"We've been fortunate to have people really go above and beyond with supporting Mission 22 and our run to Arlington, VA. Marriott Hotels has offered us rooms during our run at no expense to us. Josh and I will be covering all other expenses for the run. All money donated is going directly to Mission 22 to help support their efforts to help Veterans and their families battle PTSD and suicide prevention," said Tjersland.

When they started, they knew what they were running for, but they had no idea they'd become part of something much bigger.

There's a link to a GPS tracker to show where they are in their journey. After Baltimore, they will head to Annapolis Junction before their final push to Arlington National Cemetery.