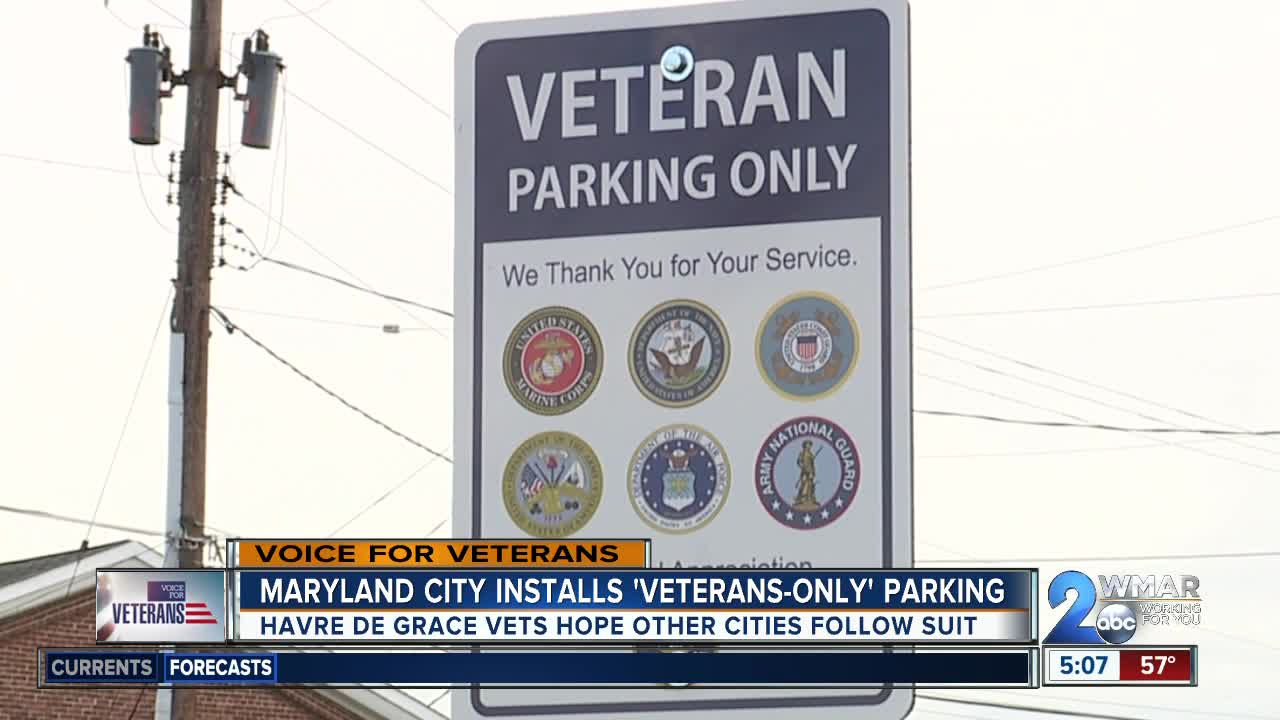 HAVRE DE GRACE, Md — You may have seen them outside businesses like Mission BBQ or Harris Teeter, but now one Maryland city has installed Veteran-Only parking spots.

A simple gesture that goes a long way for the vets who live, work or visit Havre de Grace.

"It's nice to remind vets that they have a home here in this city," said Army veteran and city councilman Jason Robertson.

"These parking spots represent a lot of pride. A lot of pride in the city. The city is really going forward to go above and beyond to show, and not just talk the talk but walk the walk," said Army veteran and 1st Vice Commander for the local American Legion Johnny Boker.

Mayor Bill Martin came up with the idea over the summer.

"We just happened to be down at the Rehobeth Beach outlets and we saw these parking for Veterans only signs and we were saying, 'I wonder if we could do that in the city of Havre de Grace?'," said Mayor Bill Martin.

So they designed their own signs with the logos for six armed services branches on it and installed them outside several parks and on busy streets. They are running on the honor system so police will not be issuing violations for inappropriate use but the city expects people will respect what it's all about.

It's one of several steps the city has taken over the last few years to honor the military. Since taking office in 2015, the Martin Administration has prioritized and supported several projects include the opening of Veterans Park, significant upgrades to the war memorial at Tydings Park, and supporting the installation of The Havre de Grace Gold Star Families Memorial Monument located in Concord Point Park, which Boker was heavily involved with. He said it's especially important with the demographics of the area.

"It's easy to celebrate the lives of the veterans here in Havre de Grace because we are kind of the central focal point for many many veterans. Demographically, 24-25 percent of this entire area is either a veteran, veteran-related or family of a service member," said Boker.

"The city of Havre de Grace takes patriotism pretty seriously. Being a defense community right down the road from Aberdeen Proving Ground, we're also trying to find new ways on a daily basis to say thank you to the men and women who wear the uniform of our country," said Martin.

It's a thank you that is sometimes much needed and can make a big impact. According to the VA, an average of 20 veterans take their own lives every day.

"I myself have been touched by that personally. I've lost more friends that I served with in the past 10 years since my deployment than we actually lost during the war, so it's significant and I think little things like just a parking spot, a monument, lets those vets and their families know that we’re here. We support you and we want to remind you of what you have and not what you lost," said Robertson.

In all of Boker's research, he couldn't find another Maryland city that has these signs and hopes other cities will follow their lead and install them.

Several signs have been up since Veterans Day and a few more will be installed soon. The parking spots located along Union Avenue, Saint John Street, and at the entrances of Tydings and Concord Point Parks.