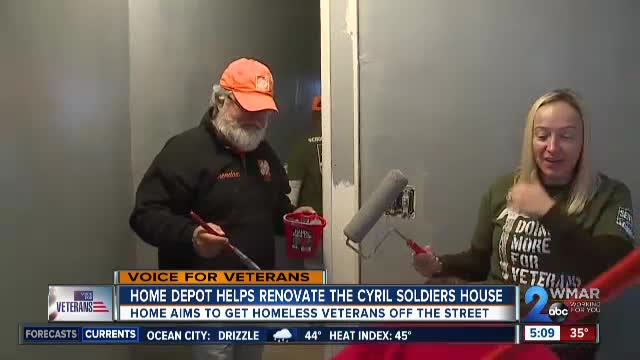 On Tuesday, the Home Depot Foundation helped the Cyril soldiers house with a big renovation.

BALTIMORE — On Tuesday, the Home Depot Foundation helped the Cyril soldiers house with a big renovation.

About 50 members from Home Depot spent their day off painting, fixing the roof, remodeling the bathroom, restoring the floor and renovating the office.

The Cyril Soldiers house is named after Cyril Stevens, a Jamaican native drafted to World War II for Great Britain and received a medal of honor.

Now, his daughter, Verona Douglas is honoring his life by helping men and women who've protected our freedoms.

"It's a feeling of hope for so many, so many veterans who's homeless at the moment and don't know where they'll be staying and they're literally in the streets and most of the time the shelters are so full, which is why we're trying to provide this service," said President of Cyril Soldiers House, Verona Douglas.

At the moment, the house will serve about 8 homeless veterans.

Since 2011, the Home Depot Foundation has transformed more than 45,000 homes and facilities for veterans across the country.