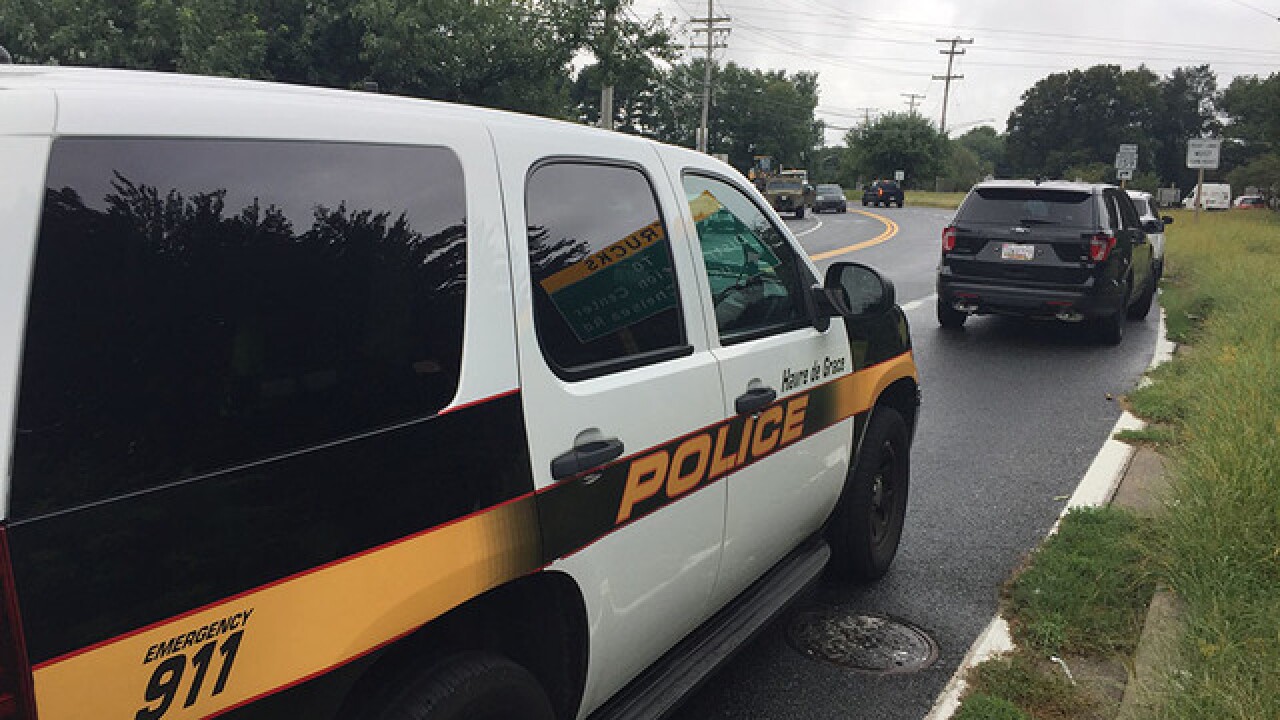 Copyright 2018 Scripps Media, Inc. All rights reserved. This material may not be published, broadcast, rewritten, or redistributed.
<p>Police responded to a reported shooting with multiple victims in Aberdeen. (WMAR 2 News photo by Bill Fink)</p>

Three people are dead, and at least two more were injured following a shooting at the Rite Aid Distribution Center in Harford County.

As news of the shooting developed earlier today, elected officials from Maryland took to social media to follow the news and release statements.

“We unfortunately have perfected this, and I hope that we don’t have to do this again in the next 10 years or ever. We’ve got a lot of problems in this country to solve to bring these kind of incidents to a closure.”

"We are closely monitoring the horrific shooting in Aberdeen. Our prayers are with all those impacted, including our first responders. The State stands ready to offer any support."

Once again, a tragic act of gun violence has hit close to home as mass shootings have become the norm. Our hearts and prayers go out to the victims of such senseless violence, and to their families. But these words have begun to ring hollow as we have had 25 mass shootings in September and more than 150 this year. Enough is enough.

If as leaders and communities, we don’t demand action, and demand it now, we should be embarrassed. This country is too great, its people too good, to remain in our bunkers stuck with talking points from the right or the left. There is not a “one size fits all” solution to the gun violence epidemic. It is about mental health. And although some may not like it, it is about easy access to guns. Complex issues rarely present binary choices. They are not “either/or.” They are difficult.

“Now is not the time …” is a weak excuse to do nothing. Doing nothing at a time when gun violence is terrorizing our communities is nonsense, plain and simple. Now, more than ever, is the time to act.

We’ve never backed down from challenges in our nation, and we can’t back down now. If we pass this cancer onto the next generation, the blood will be on our hands.

“As we learn more about the shooting in Aberdeen this morning, my heart is with those who were killed and their families, the victims who are injured, and the first responders on the scene. Thank you to our law enforcement and emergency health professionals at local hospitals who are responding to this tragic shooting and working to keep the community as safe as possible.”

"I’ve been in touch with local authorities about the shooting in Harford County. My heart is with the families and victims of those impacted. But words are not enough, we must do more to end the toll of gun violence in our communities."

"Just horrific. I'm monitoring this carefully, and urge residents to stay clear of the area until further notice."

"I am proud to represent Aberdeen in Congress – it is a close-knit community of patriotic families. Once again, a mass shooting hits too close to home.

I want to acknowledge the professionalism of the Harford County Sheriff’s office: they were on the scene within five minutes and resolved the situation without firing a shot. They were supported by other federal, state and local law enforcement in the type of coordination we hope we never have to see. I also want to thank the emergency medical workers for their response.

We don’t know all of the facts and must now let investigators do their jobs. But one thing I know for sure: people who go to work every day should be guaranteed the right to return home to their families. These shootings should never become routine. I want to express not just my condolences but my commitment to finding a solution to our country’s gun epidemic to today’s victims and their loved ones.”

"As we await more details, our thoughts are with those in Harford County. Thank you to all our law enforcement officials who once again responded quickly to a scene that is happening far too often in Maryland and across the nation."

I am praying for the victims and families in Aberdeen and I thank the first responders for their immediate action. It is absurd how often we must say this, but we cannot allow these mass shootings to become our new normal. We must keep fighting to stop this.

"Closely monitoring the situation and wishing safety for all involved. Our hearts are with the victims and injured."