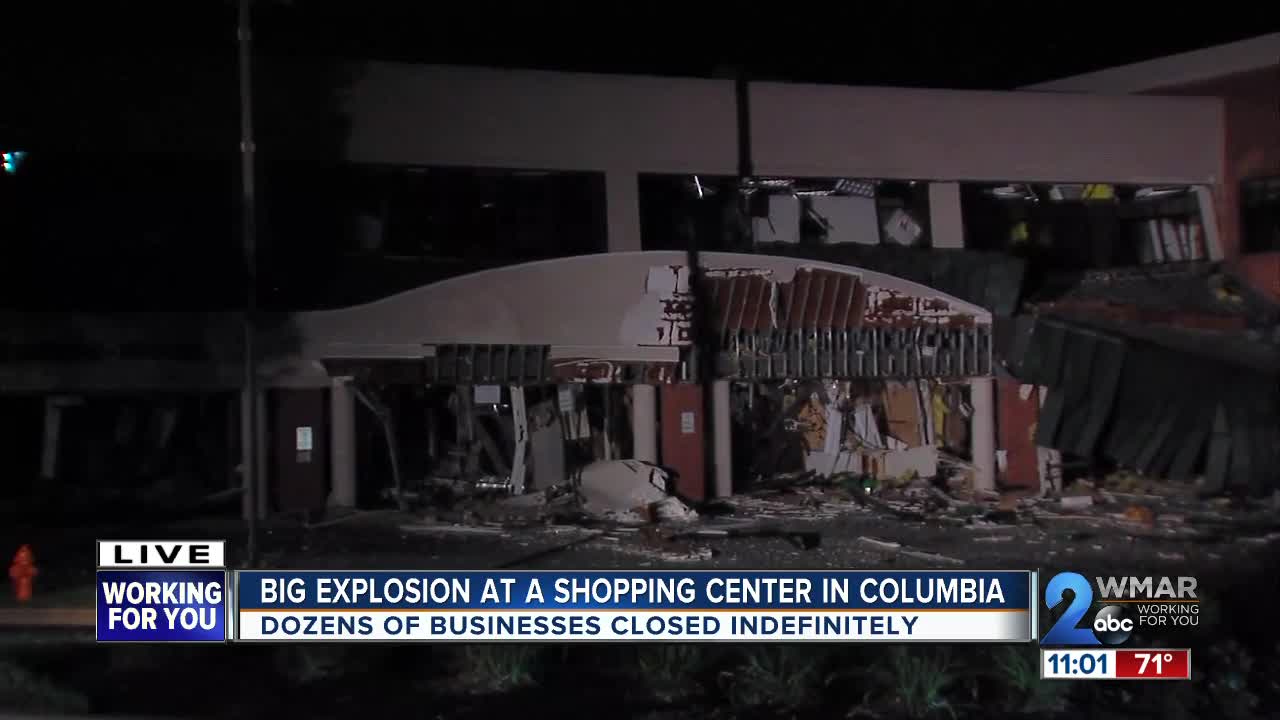 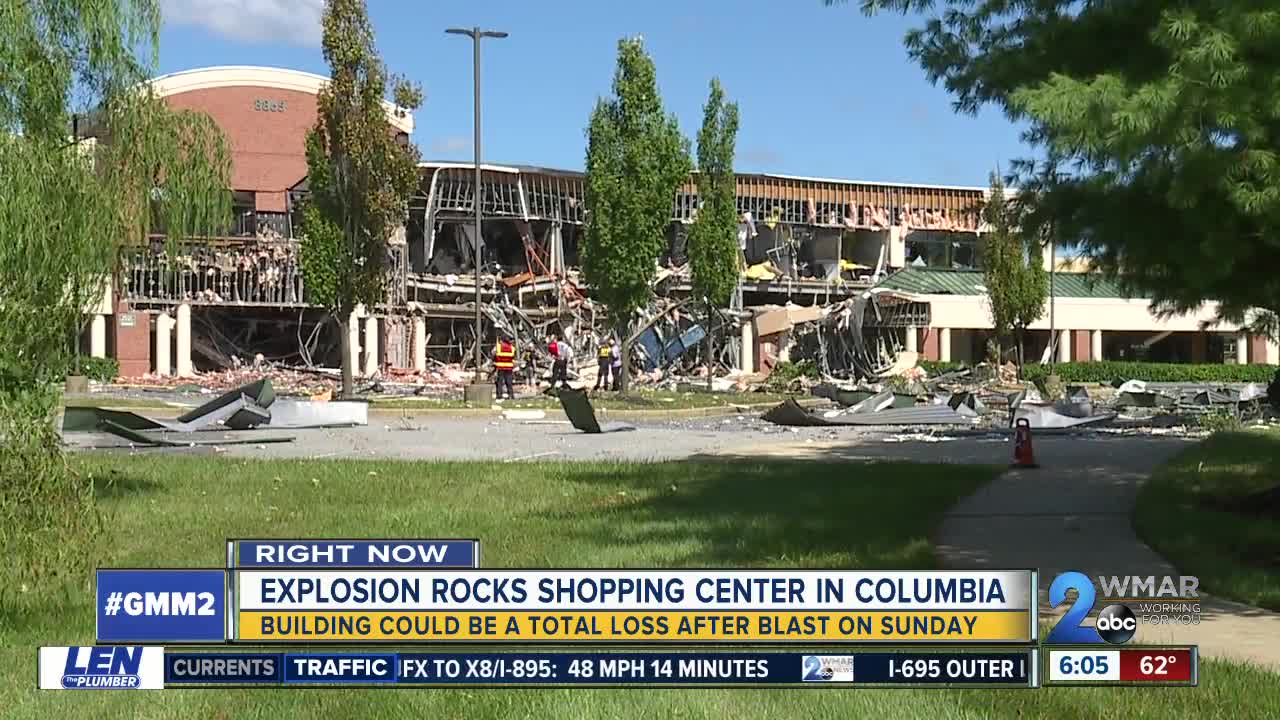 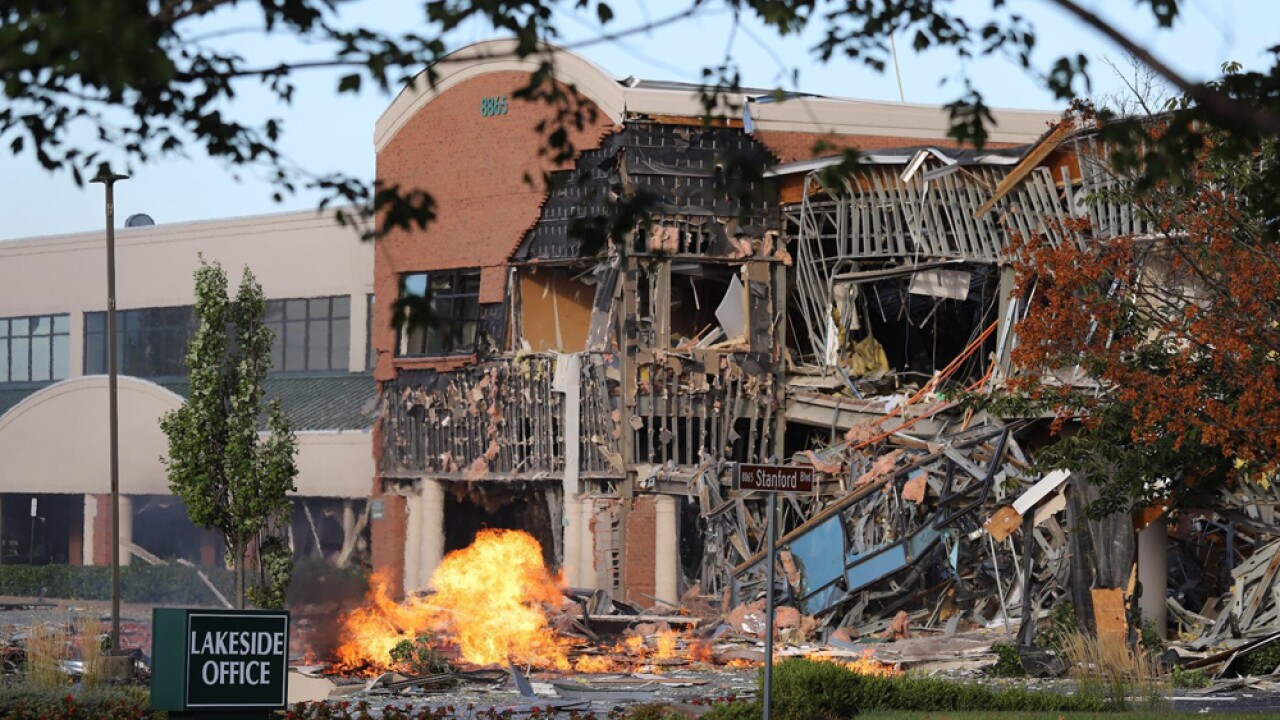 COLUMBIA, Md. (WMAR) — Several businesses including a local tailor, coffee shop, spa, and grocery store are in danger of completely collapsing following a Sunday morning explosion that could be heard miles away.

"I literally live about 10 miles away, and I thought the children fell out of the bed, that’s how hard it hit," said Allison Jones.

Howard County Fire and EMS say crews originally responded shortly before 7 a.m. to the shopping center in the 8800 block of Stanford Boulevard, across the street from Wegmans, for reports of a hissing sound coming from a large crack in the parking lot.

When they arrived, natural gas was leaking out of a large crater in the parking lot.

Though none of the businesses had opened yet, everyone in the surrounding areas were forced to evacuate.

Then while BGE was on scene investigating, the inside of the building exploded causing extraordinary structural damage, and the crater to catch fire.

Late into Sunday evening, community members stood across the street, taking in the damage.

"There’s no description. It’s just a total disaster. It just melted," said Jack Backiel, who felt the explosion a mile away.

"I feel for these people because these are their livelihoods here. Riverside café, we drink coffee there on Saturdays. Krav Maga, my son goes there," said Jones.

Christine Battle frequents the shopping center and says the business owners and their workers are devastated by the news.

"They’re sick. They’re devastated. I just spoke to the husband of one of the owners who said that she couldn’t even come out here today. She’s throwing up. She’s just beyond comprehension and it’s the thought of what if they were working," said Battle.

She and others acknowledging that businesses can rebuild and it's lucky none were opened when this happened.

"If this happened 28 hours later there would be 200 or 300 people dead. It’s just lucky that this thing happened at 7:30 in the morning on a Sunday morning. It would have been a catastrophe," said Backiel.

“Fortunately, because of their [HCDFRS] actions and because this happened on a Sunday morning when no one was inside the building, there are no reported injuries at this time,” said County Executive Calvin Ball.

Howard County Fire and Rescue Battalion Chief Stephen Hardesty says they took extra precaution because they knew certain gas leaks can lead to situations like this one.

"It can migrate. It can follow utilities along and that’s one of the issues that we’ve seen in the past so we evacuated the area and stand clear until BGE can shut it down," said Hardesty.

Fire officials say due to the extent of structure damage, the building is most likely a total loss.

Late Sunday night BGE officials said they completed safety inspections of the area and found no issues with gas equipment.

The gas and electric for the center and surrounding area will remain shut off at least through the night, until it's safe to investigate what happened. Hardesty said that could be a lengthy process.

"Anytime something serious like this happens, we try to be as meticulous as possible to comb through it to make sure we get to the root of the cause," said Hardesty.

Within the last year BGE says they have received no reports of any gas odor coming from the location.

Prior to Sunday, the gas main was last inspected in July with no problems found according to BGE.

In the meantime, Ball has mobilized a team from the Howard County Economic Development Authority to assist businesses and workers impacted.

"We will do everything possible to minimize the impact of this explosion,” said Ball.