Flash flooding washes away homes and businesses in Ellicott City

Devastating flooding in Ellicott City washed away homes and businesses forcing some residents to evacuate. More than eight inches of rain fell in the area Sunday.

Devastating flooding in Ellicott City washed away homes and businesses forcing some residents to evacuate.

More than eight inches of rain fell in the area Sunday and Howard County Executive Allen Kittleman said it was worse than the flood of July 2016. During a conference on Monday, it was announced that over 1,100 calls were made to emergency officials, 300 people needed to be rescued, and 24 to 30 of them were stranded in the water.

Chief Gary Gardner
A Howard County Officer was working to save people and at one point had water up to his shoulders and was holding onto a railing. He was able to escape. pic.twitter.com/ouFVfcI4cV

While there are no deaths reported at this time, police are still searching for 39-year-old Eddison Hermond who went missing during the flooding. They say the man was at La Palapa holding the door for a woman who could not find her cat, and when he went behind the restaurant to look for it, he got swept away by the water and did not resurface.

Click below to see more pictures of the massive flooding: 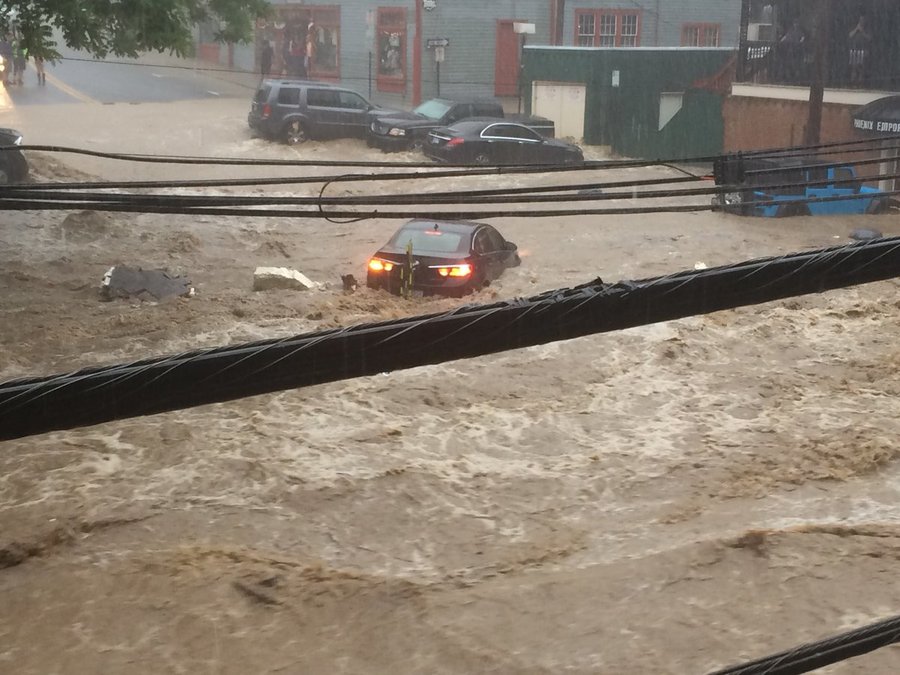 Because of these devastating floods, on Monday Governor Larry Hogan declared a State of Emergency for the entire state of Maryland.

“Less than two years ago, the citizens of Howard County and Ellicott City went through a horrific ordeal, and sadly, they are facing a similar emergency today,” said Governor Hogan. “Our administration is closely monitoring the situation and working in partnership with local officials, including Howard County Executive Allan Kittleman, to respond to this extreme weather as quickly and efficiently as possible. The immediate focus is ensuring everyone is safe and secure. The state will continue to provide all available resources to assist Howard County with their response to this extremely dangerous and ongoing situation. I strongly urge all Marylanders to monitor the weather, heed all warnings, and avoid the affected areas.”

Maryland Department of Emergency Management is being called in to assist in any way possible, and numerous other state agencies will be providing support.

BGE sent a release on Monday saying that in areas where heavy flooding occurred, there will likely be extended outages of electric and gas service until the infrastructure can be fully inspected, and in some cases rebuilt. They continued to say, the time it takes to restore the gas or electric services will depend on the amount of damage that was done to the gas mains and power lines.

If you have flood damage, BGE asks you to report your outage from a safe location online or on BGE's app. You can also report outages and downed wires by calling 877-778-2222.

There are many resources available for people who are affected by the flood.

And it is not just people's homes that were affected. Since the flood of July 2016, many businesses reopened and new ones have been established, but after Sunday's flash flooding, they are forced to rebuild again.

To make a donation to the flood victims, click here. You can also donate water, cleaning supplies, and other supplies to the Howard County Food Bank from 10 a.m. to 2 p.m. on Monday.

If you are interested in volunteering you can click here to register. Once the recovery volunteer opportunities are available, those who register will be notified.