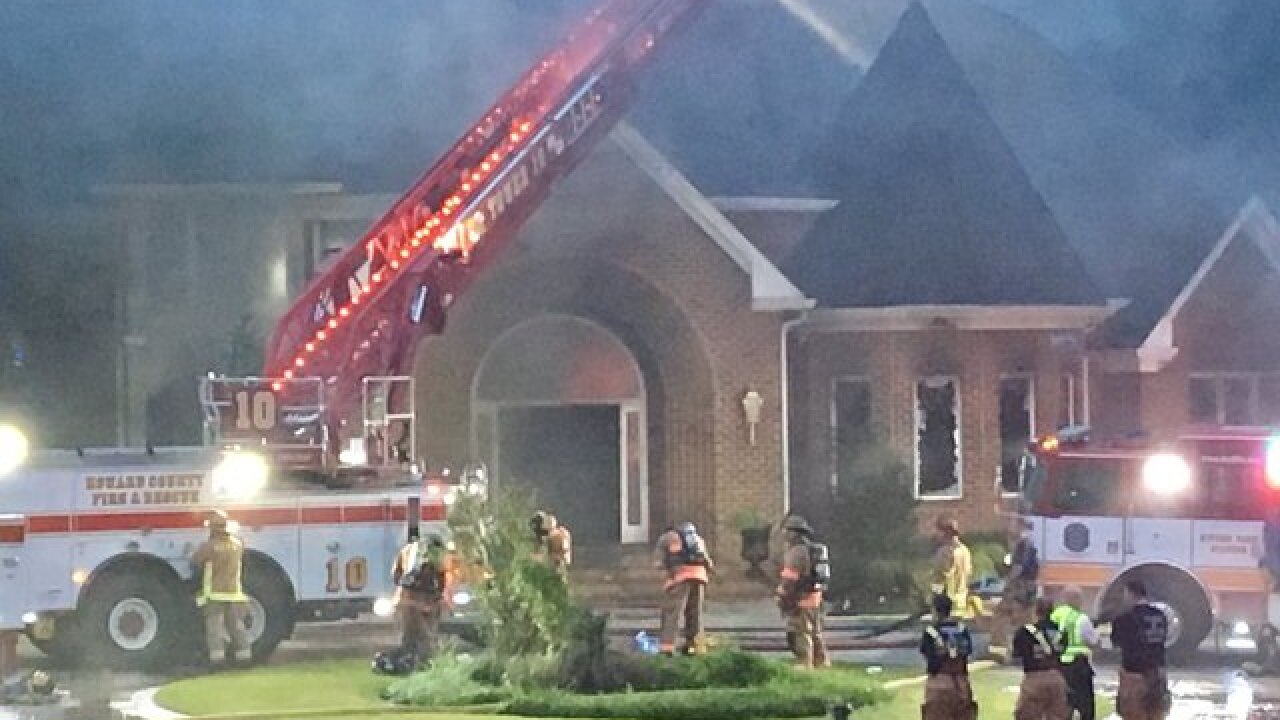 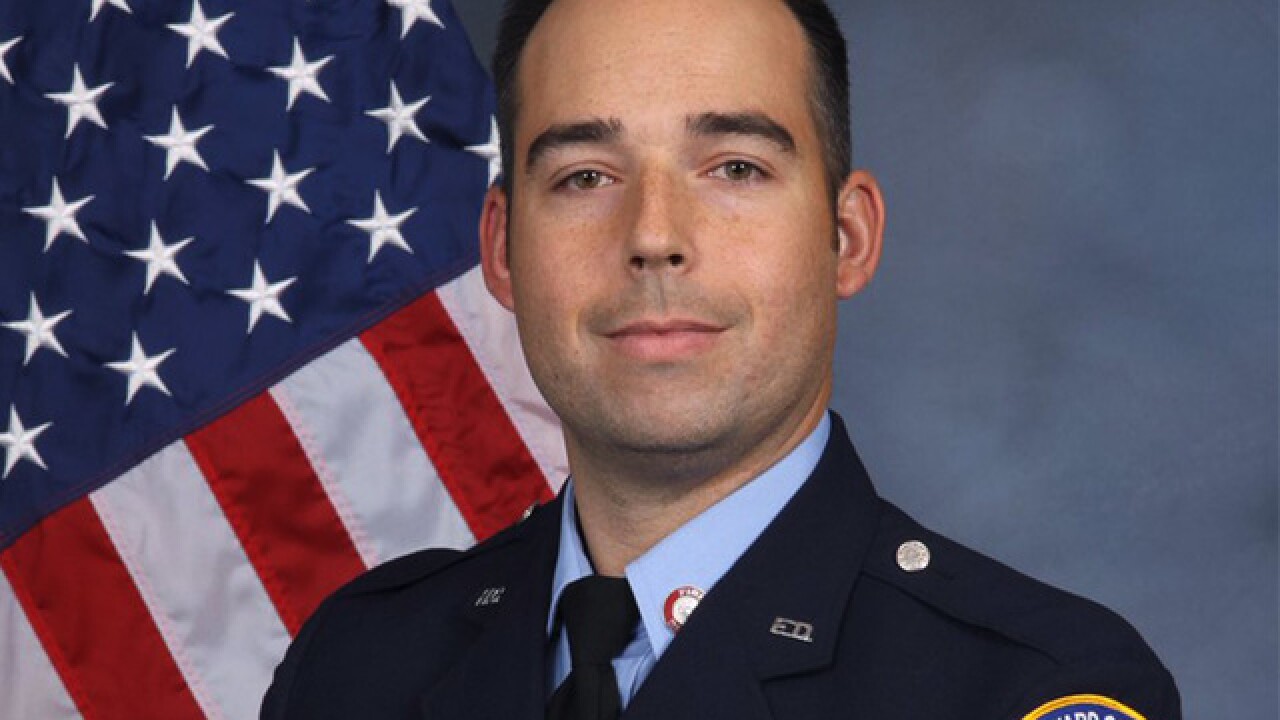 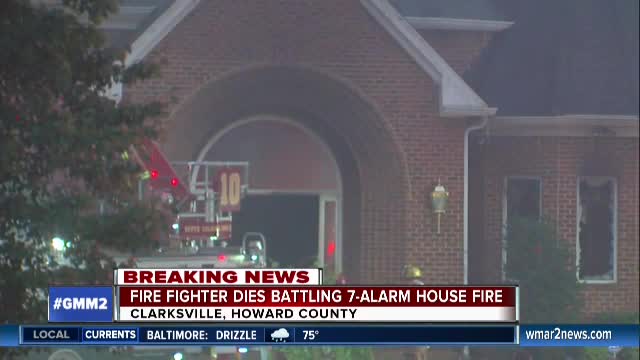 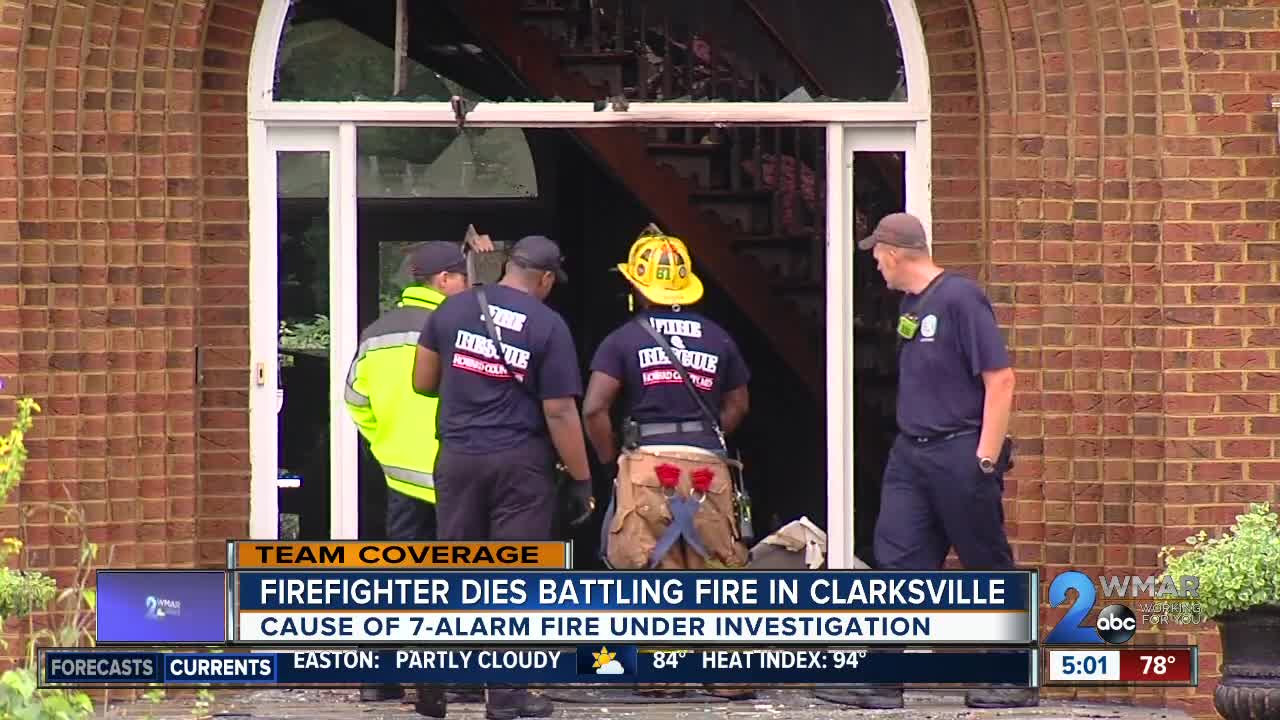 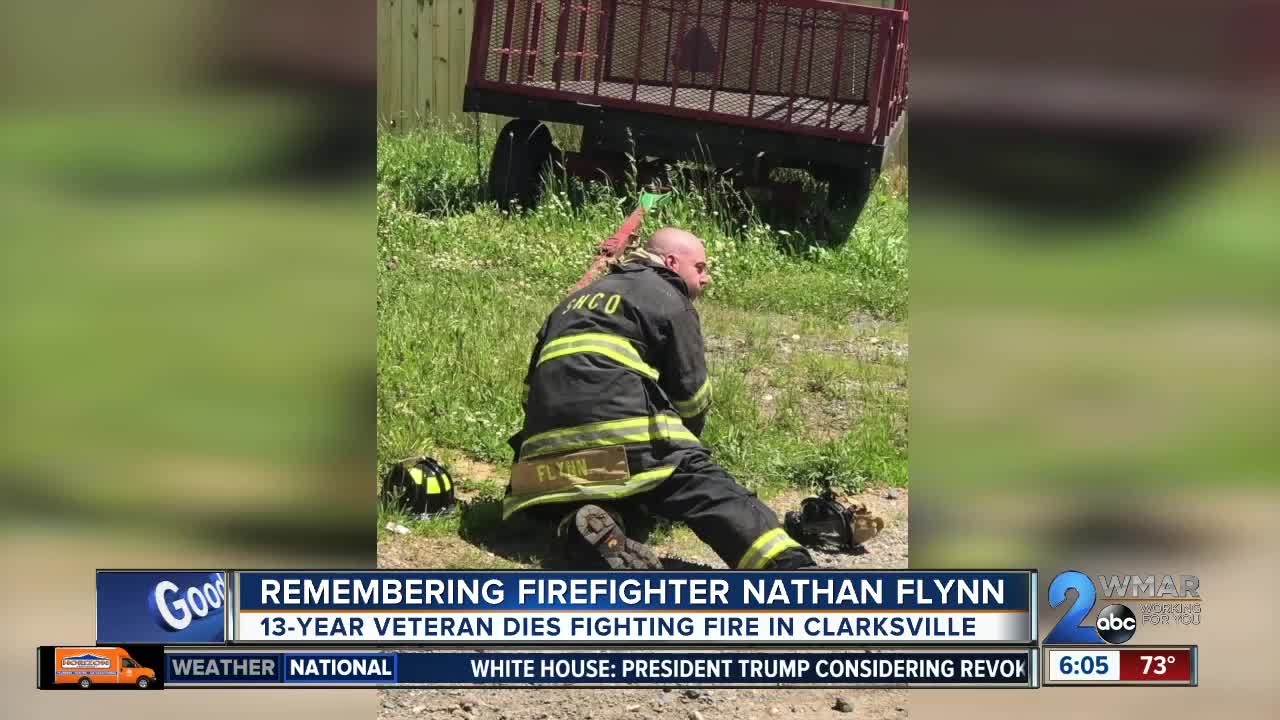 A firefighter lost his life while battling a massive seven-alarm fire in Howard County Monday morning.

The fire broke out just after 2 a.m. in the 7000 block of Woodscape Drive near Clarksville Middle School after officials were called to the area for a possible lightning strike.

The three people inside the home at the time are accounted for, but officials say a firefighter did not make it. Maryland State Police identified the firefighter as 34-year-old Nathan Flynn who is the first career firefighter in Howard County to die in the line of duty.

Officials say Flynn fell through the floor and a mayday was called. He was taken to Howard County General Hospital in critical condition where he later died.

“As the firefighters were making their way inside the structure, firefighter Flynn fell through the floor from the first floor to the basement," Howard County Fire Department Deputy Chief William Anuszewski said while describing the series of events at a press conference later Monday morning. ":Immediately upon the 'mayday' being called, a rapid intervention team was deployed. An extensive search was conducted to find firefighter Flynn. The crews conducting the search experienced heavy fire conditions in the basement.

"At approximately 2:42 a.m. Fire Fighter Flynn was found and removed from the structure, where he was immediately given emergency care and transported to Howard County General Hospital," Anuszewski said. "At 5:30 this morning I had the unfortunate duty of informing the family.”

Officials say Flynn was a 13-year veteran of the department.

Police cars & fire trucks escort what appears to be the fallen @HCDFRS firefighter who died while battling the massive house fire in #Clarksville @WMAR2News #GMM2 pic.twitter.com/JgJqxvywyP

"This is a tragic day for the family of this firefighter and for the Howard County Department of Fire and Rescue Services," said the Deputy Fire Chief during a conference Monday morning.

Crews were using a defensive strategy to fight the fire from outside of the home. Anne Arundel County, Prince George's County, Montgomery County, and Carroll County fire crews were on the scene trying to help.

Maryland Governor Larry Hogan sent a tweet with his condolences after hearing about the firefighter's passing saying, "Incredibly saddened to learn of the passing of a Howard County firefighter as he bravely worked to save others' lives. The First Lady and I send our prayers and deepest condolences to his family, fellow firefighters, and loved ones as we mourn the loss of a hero."

Harford County Executive Barry Glassman also sent out a statement saying how Flynn was a Havre De Grace resident, a volunteer with the Susquehanna Hose Company, and a member of the Harford County Technical Rescue Team,

“On behalf of the citizens of Harford County we salute Nate for his service and his bravery, and we are grief-stricken for the young family that he leaves behind.  Our community will support them in any way that they need during this difficult time.  We pray for Nate, his family, and his fire service brothers and sisters in both counties.”

Other fire crews have also sent their regards for those affected by the firefighter's death. Baltimore County Fire said on Twitter, "We are deeply saddened to hear about the tragic loss of a @HCDFRS Firefighter this morning. Every day, the men and women in blue constantly put their lives on the line to save others"

Our thoughts and prayers are with the Howard County Department of Fire and Rescue and the family of the fallen firefighter. pic.twitter.com/2Mz7fsjFZc

My sincere thoughts and prayers are with the @HCDFRS on the loss of their hero firefighter this morning. A thankless job. May God bless his soul and comfort his family and friends.

.@mdsp sends our support and condolences to the @HCDFRS as they deal with tragedy of the #LODD of Firefighter Nathan Flynn. pic.twitter.com/TMwow9oeDO

The Officers and Members offer our sincere condolences to the family and friends of FF Nathan Flynn of @HCDFRS and @SusquehannaHose who was tragically killed fighting a house fire this morning in Clarksville. https://t.co/MmXUTX88mN

Maryland State Police also announced that the United States Flag and the Maryland State Flag will be flown at half-staff effective immediately to honor Nathan Flynn.

Former candidate for Howard County Council and Johns Hopkins Physician Janet Siddiqui, is an owner of the home that caught fire. She and her husband Nayab released the following statement on Flynn's death;

We are devastated by the loss of firefighter Nathan Flynn. We grieve alongside the Howard County community and our hearts go out to his family and comrades. Structures can be rebuilt, but the loss of a loved one is irreplaceable. We are profoundly grateful and thank the fire department for their bravery and dedication today.

The Siddiqui's also donated $10,000 to a GoFundMe set up by the Howard County Professional Fire Fighters Association (IAFF Local 2000) in Flynn's memory. You can donate to the fund here.