Emergency officials braved the icy and snowy weather to free a horse stuck in a creek in Jarrettsville.

The Jarrettsville Volunteer Fire Company and the Harford County Technical Rescue Team responded to the 3100 block of Troyer Road to help free the horse.

Owner Jenn Jensen says her rescue horses were out crossing a creek like they do every morning, when one of them slipped on ice, broke his leg and couldn't get back up.

The horse named Johnson was freed from the creek shortly after 12:30, but the owners had to make the heartbreaking decision to put him down because it was too cold and in shock.

Jensen says she rescued the old horse from being sent to a slaughterhouse 7 years ago and nursed him back to health.

"I bought him for $300 and I brought him home and my husband thought I was crazy and I said, 'I saved this horse!" Jensen said. "He’s just been living a really happy life for the last 7 years. But unfortunately, it’s really sad it had to end this way."

She's thankful emergency crews worked to free the horse. Crews said the snow made this rescue much more difficult.

"I just want to thank everyone who came. I know it’s really bad out. They tried to work as hard as they could try and get him out of the stream," Jensen said.

TRAGIC UPDATE: crews rescued the horse but he was too cold & owners had to put him down. They are just devastated. His name was Johnson, an old horse they rescued from a slaughterhouse & nursed back to health. They’re thankful for rescue crews who braved snow to help @WMAR2News pic.twitter.com/X1NW5rwYOP

Click the picture below to see photos of Johnson the horse: 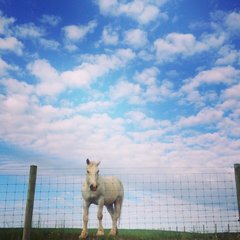