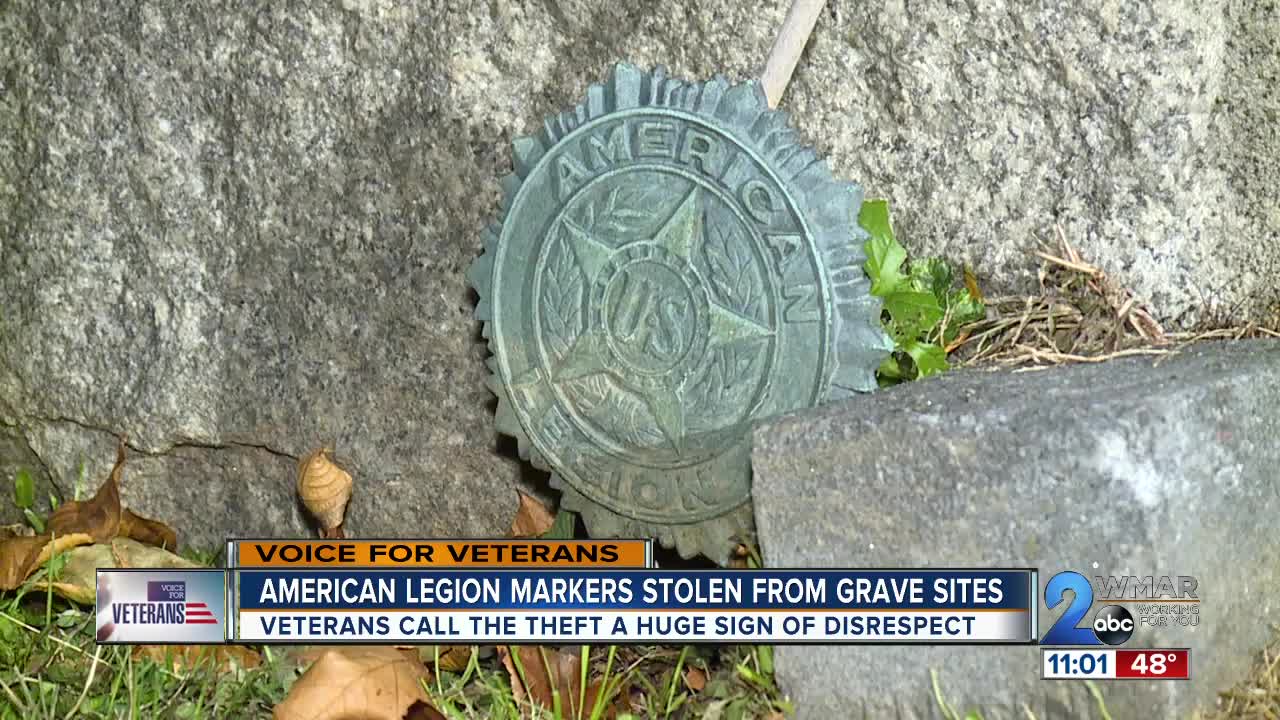 When a veteran dies, the flags that honor them are held together by a small round marker from the American Legion.

CECIL COUNTY, Md. — When a veteran dies, the flags that honor them are held together by a small round marker from the American Legion.

It's a longstanding tradition that someone had no respect for when they stole 30 of those markers sometime between Saturday and Tuesday.

Maryland State Police are investigating the gravesite robberies that happened at the Rosebank Cemetery in Calvert. Just down the road is the Mason Dixon American Legion Post 194.

Post Commander Martin Thompson is terribly disappointed that someone would show such disrespect to those who serve.

RELATED: Someone took American Legion grave markers from a cemetery in Cecil County

“I’m afraid to say it’s society, society has broken down or is breaking down when you have to go and vandalize a veterans grave or a grave period,” said Thompson.

Thompson was a member of Post 194’s Honor Guard and has been the one to give grieving families the marker at loved one’s funerals.

“They will perform the 21-gun salute, fold the flag, present the flag to the family along with that there is a marker,” Thompson said. “Such that is missing, and the American flag is attached to that marker.”

George Remhof, the Commander of the American Legion Council of Cecil County, said they used to all be made of copper to outlast the flags but some are now made out of other materials.

“The flags are temporary, they may stay up year round,” said Remhof. “Every Memorial Day we refresh the flags even the flags aren’t there people really cherish those markers. It really tells the world that person whose deceased was a veteran.”

They are only around two pounds they wouldn't get much of anything if sold as scrap.

The person who targeted the American heroes grave sites is still out there.

If anyone has information about the person(s) responsible or the location of the markers, please contact the Maryland State Police North East Barrack at 410-996-7800. Refer to case number 19-MSP-047045.