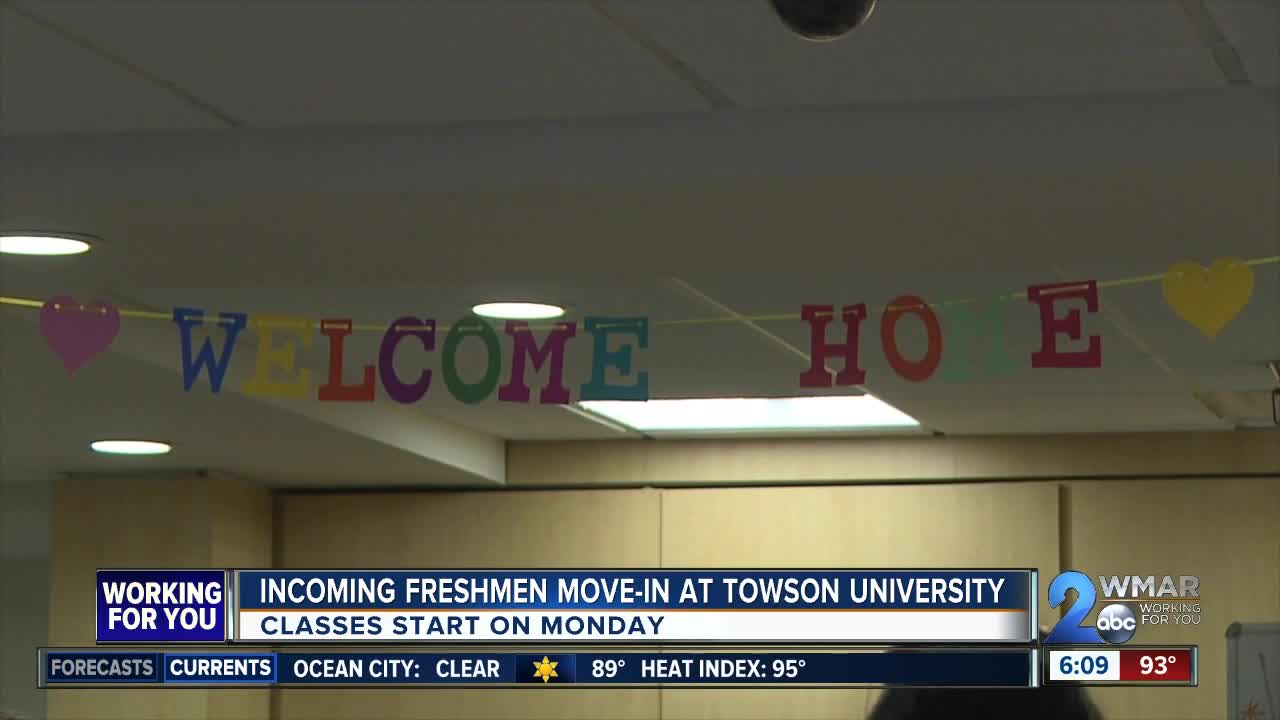 TOWSON, Md — Gone are the quiet days of summer at Towson University. Thursday, the incoming freshman class moved in.

"We go from 0 to 60 like that," said Towson University President Kim Schatzel.

Each new students was paired with a TU student volunteer to help move in, filling up carts with their old life and getting ready to start anew.

"I’m anxious to see how the work load is because, you know, college and everything people told me is it's a lot of work and you have to study all the time," said freshman computer science major Jahde Flood.

They had the basics: bedding, storage, clothes; but one brought a good friends.

She held onto her fish pal in his tank as she waited in line to move in. She said she's had him for two years and brought him to school so she could keep caring for him.

"My mom called him Doom because she said he was doomed to die but I proved her wrong," said Gilbert.

It's an historic year for Towson. A record 23,000 students are anticipated to take classes at TU this fall — including about 20,000 undergraduates and 3,100 graduate students. The freshmen class is the most diverse ever.

"48 percent of our freshmen identify as minorities and we have the most academically prepared and highest GPA of any classes we've had before," said Schatzel.

Nearly 22 percent of incoming freshmen are first generation college students. Others are following in their parents footsteps.

"My dad went here," said freshmen psychology major Rachel Pundt. "He would take me out to the campus all the time so I thought that was cool. I looked at some other schools in the area but they just didn't feel that same as this one."

Students' reasons varied for why they chose TU.

"It's closer and not as expensive as out of state and I do like the campus over all," said Flood.

"It's a nice campus down here, a lot warmer. I want to meet a lot of new people," said Schenider, who is from New York.

But their choice is all the same, to be TU Proud. Classes start on Monday.

Here are more facts about TU:

+ New students include about 2,700 freshmen, 2,100 students transferring in and 775 graduate students.
+ TU students will come from 33 states and 26 countries, including Maryland and the U.S.
+ TU welcomes 93 new full-time faculty members this fall.
+ About 48,000 Chick-fil-A sandwiches and more than 115,000 orders of fries will be served this fall semester.

CAMPUS FACTS
+ TU’s 329-acre campus includes 27 academic buildings, 18 residence halls and 18 dining locations.
+ Under construction on York Road is the new Science Complex, which is set to open in Fall 2020. The building will provide new academic and research space for TU’s expanding Fisher College of Science and Mathematics — home to one of just four ABET-certified cybersecurity programs in the world.
+ The University Union is under renovation — an expansion and overhaul of the building that will add 100,000 square feet of space to the most-utilized student building on campus. The Union was built in the 1970s when TU had 9,000 students on campus. The project will be complete in 2021.
+ TU recently updated the South Campus fields with new playing surfaces for the women’s field hockey team (opened last season) and the women’s soccer team (completed this summer for the current season).
+ More than $1.7 billion of development is happening within a ½-mile radius of campus, including a number of public-private partnerships in uptown Towson that are being built in proximity to TU.

RANKINGS
+ The No. 29 public university in the Northeast region, and among the top 6 percent of all public universities nationwide, according to Forbes.
+ TU is ranked among the top 9 percent of universities in the world by the Center for World University Rankings.
+ TU climbed 40 spots in Money magazine’s “Best Value Colleges” rankings — providing students and families the second-best value in Maryland.
+ TU was also listed among just 225 universities in Princeton Review’s list of top Northeast region institutions. (They do not provide a numerical ranking).