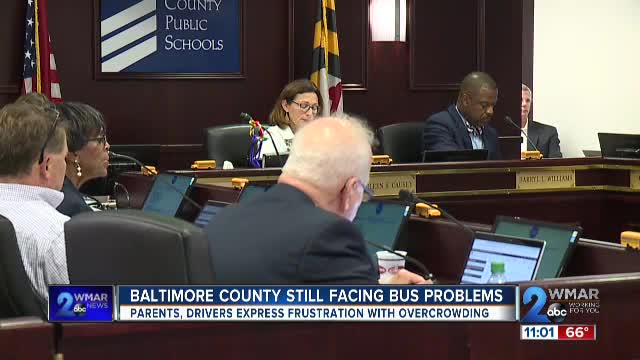 The Board of Education of Baltimore County held a meeting on Tuesday focusing on the transportation issues.

BALTIMORE COUNTY, Md. — The Board of Education of Baltimore County held a meeting on Tuesday focusing on the transportation issues.

As Baltimore County Councilman David Marks addressed issues of bus overcrowding, he asked people who are here for the same issue to stand. Councilman Marks wants to know why the North Eastern district is impacted the most when it comes overcrowding and delays.

“We need to fix transportation this has been going on for way too long. As a parent I’m done with being patient,” said one parent.

“I am here because it’s not okay for a kindergartener to sit on a bus for 70 minutes one direction," another parent said. "I am here because three kids to a seat elementary through high school is not safe.”

Earlier this month, photos showed Baltimore County students riding buses so crowded that they were forced to sit on each other's laps or in the aisle

Something that started on the first day of school.

“On a day they’re excited about new shoes, new school supplies, book bags it was tainted by the fact that they weren’t at school on time. Having to have that rough conversation. Why wasn’t my bus on time? And explain to them I don’t know because there’s no communication,” said a father in the Northeast district.

This parent, like many others, stressed his frustrations about the school bus issues and the “utter lack of communication when my kids are being picked up and when they’re being dropped off” which he says started on the very first day of school.

Four weeks later, parents said pick ups have gotten better, but drop offs are still all over the place.

“Unrealistic routes and drives times. What may look good on paper or in computer software isn’t always possible to do on streets when you had traffic in the time it takes to get kids on and off buses,” said the Northeast Education Advisory Council member.

The Director for the Office of Transportation, Dr. Jess Grim, said delays happen for a number of reasons because of traffic, road closures and unexpected issues like call outs and break downs. However, he admitted he needs to be better at communicating with his staff and parents.

When it comes to overcrowding, he said they are working on figuring that out. The simple solution is more drivers. They’re at least 50 drivers short. In the meantime, they say they have to work with what they have.

“We don’t want to put a fix on a fix that isn’t going to be long term,” said Dr. Grimm.

The school board members asked several questions to the representatives from the Office of Transportation. When asked why the Northeast district is having more issues, Dr. Grimm said that area has a number of issues stemming from temporary fixes from the last school year.

Another member asked what the board can do help. A representative stressed just support. However, another board member said that’s not good enough and asked for them to come back to them with a concrete list to get better solutions.