At first, some residents didn't know what to make of the piercing sound, which bellowed through the Carriage Hill apartment complex as if it had come from a cannon.

"I'm lying down.  All you hear is, 'Boom!  Boom!  Boom!' and then my dog started barking and everything,” said Dwight Harrell, “I suspect it was just the people up there on the top of the roof.  We thought they were coming over here."

But Shelby, Harrell's seven-year-old border collie knew this wasn't the sound of any roofing crew, and firefighters showed up moments later sounding an alarm.

"Fire department came in there and knocked on the door like, 'Y'all got to go!  You know what I'm saying?  'Before everything blows up!'" added Harrell.

This unit in a neighboring building had, indeed, blown up, shattering its glass windows and sending window shades and personal items to the ground below.

Baltimore county firefighters suspect it was a natural gas leak and ordered as many as a hundred people out of two dozen apartments as BGE crews came in to search for the source of the explosion.

"If it was, in fact, natural gas, it can be anything,” said Capt. Tim Rostkowski of the Baltimore County Fire Department, “If there was a small leak, and somebody turned on a light switch in an adjacent apartment.  Sometimes that electricity will travel through some of those lines if they're interconnected or it could be something very small.  It doesn't take a lot if that gas mixture is right to set something like that off."

Whatever the cause, investigators say no one suffered any injuries from the blast, and the tenants happened to be gone when their unit exploded.

"Fortunately, and it's pretty close to the sidewalk here.  So nobody being home.  People not walking by at the time.  Certainly, we got pretty lucky that no one was injured,” said Rostkowski, “Absolutely."

A woman who lives on the same floor as the explosion says a maintenance worker had just been in her apartment and in the unit, which was damaged, fixing their stoves, and the blast occurred just a few minutes after he left claiming the problem had been addressed.

Click below to see more pictures of the explosion: 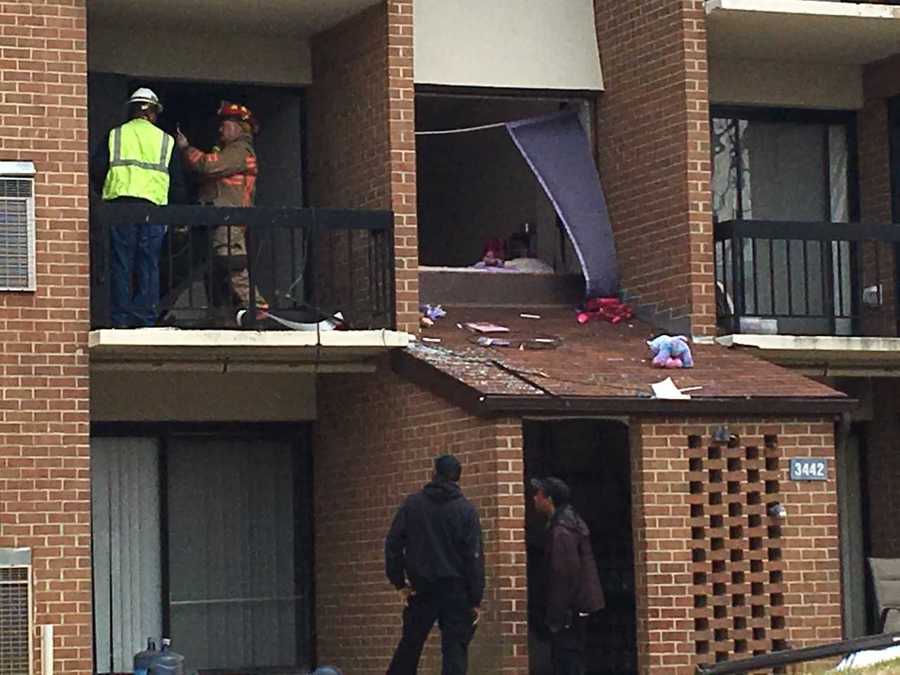 Joseph Brillon, Property Manager at Morgan Properties, the owners of the apartment building, reached out to ABC2 News with the following statement regarding the explosion:

“The safety of our residents is of the utmost importance. While the cause of the explosion is still being investigated, we are cooperating with the local fire department and asking that apartment residents follow all directions provided by the Baltimore County Fire Marshal while on-site. Residents of the building have been evacuated, and no injuries have been reported."

One person has been displaced as a result of the explosion.