7-year-old girl dead after van strikes her in Essex

Baltimore County Police are investigating after a second-grade girl was hit and killed by a van.

Baltimore County Police are investigating after a second-grade girl was hit and killed by a van.

According to police, the incident happened in the 900 block of South Marlyn Avenue around 3:30 p.m. just across the street from Sandalwood Elementary School.

Police say the girl, later identified as Natasha Newman, was running down the sidewalk chasing after a group of children when she darted out in front of a white work van. The van was exiting the townhome community and tuning onto South Marlyn Avenue when it hit the little girl.

When officers arrived at the scene, they immediately performed CPR on her.

Officials say she had serious injuries and was transported to an area hospital where she was later pronounced dead.

Baltimore County Interim Superintendent Verletta White released a statement on the passing of the student:

I am heartbroken to learn that one of our precious students passed away this afternoon after being hit by a vehicle near Sandalwood Elementary. Support will be provided to students and staff. My thoughts and prayers are with the family and school community.

Baltimore County Public Schools Traumatic Loss Team will be at Sandalwood Elementary on Friday, Oct. 19, to support staff, and Monday, Oct. 22, to support students and staff.

There is a GoFundMe page to help the Newman family.

Click the picture below to see photos of Na Tasha Newman the vigil constructed for her: 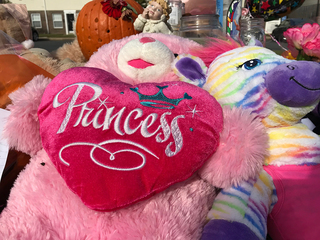 A vigil was held Friday night by family and friends in remembrance of Newman.