“It was really about becoming a community center in Baltimore,” said Adam Benesch, one of the co-founders of Union Brewing, the company that spearheaded the project. The popular brewer was growing too large for its old warehouse less than a mile away on Union Avenue in Hampden. The new space will allow them to grow production from 11,000 barrels annually to 30,000 once fully operational (that’s nearly 400,000 cases of beer a year). He plans to add considerably to the companies staff, both hiring workers to run the new, larger tap room, and more people to run the brewing operation.

The brewery is planning a grand opening celebration for July 28, an event that's already sold out.

His new neighbors sounded just as excited about their new home and the potential growth it could afford their companies.

“This was a great first step to expand our business,” said Laura Alima, who along with her husband Dave, own The Charmery, a popular ice cream store that started on The Avenue in Hampden and has since added a second location in Towson. Alima said the addition of another retail operation in the county was largely to have a place to sell the product they would be making at Union Collective. They will both make more ice cream and sell their treats in the warehouse.

Alima spoke glowingly of partnering with Union Brewing, feeling aligned with the company and supported in their expansion, “which makes the project that much more sweet,” the dessert maker said cheekily.

Another ideal partner for a facility that makes and sells beer is a company that satiates hungry imbibers with freshly made pizza. Well Crafted satisfies such a niche, as the wood grilled, mobile pizza operation will put down roots in the building.

“It just felt right,” said Liz Bower, one of four owners of Well Crafted. “It was always appealing to bring multiple businesses together.”

Click the picture below to see images of the new Union Collective space: 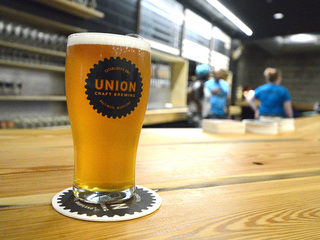