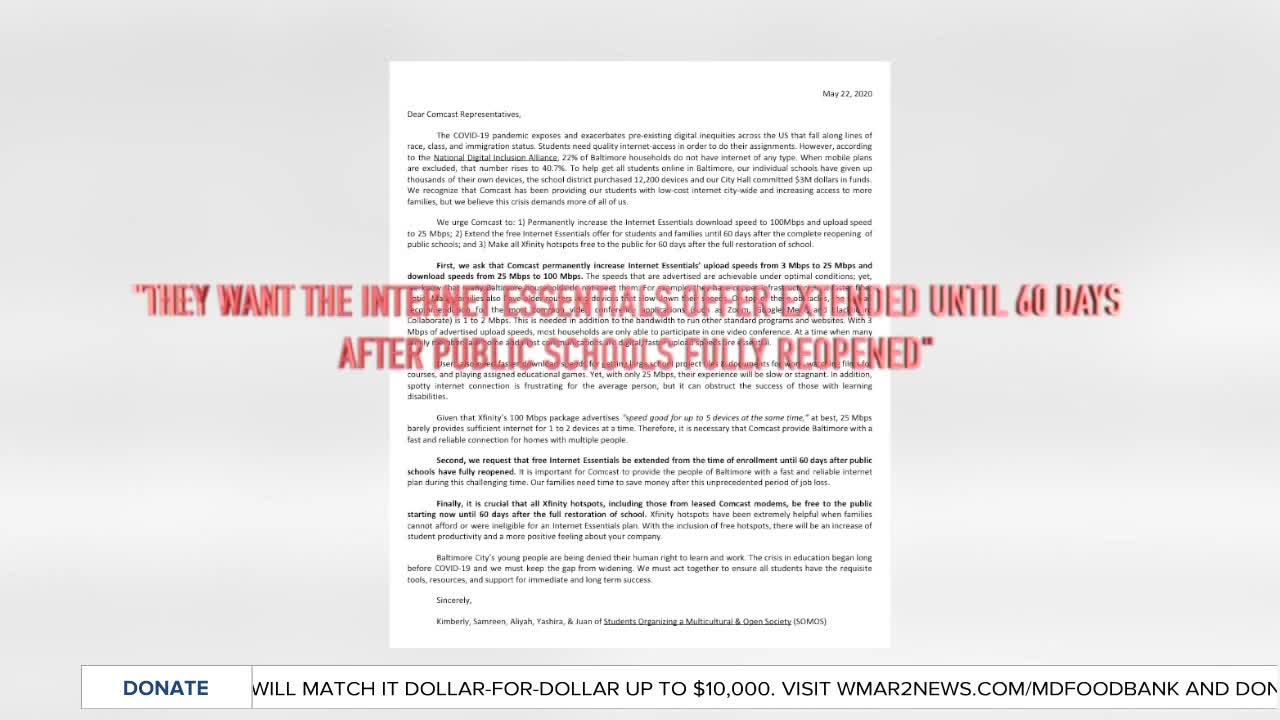 Despite the work of Comcast’s Internet Essentials to connect low-income families, the group said students who are learning remotely lack the internet quality to participate in learning from home.

Kimberly Vasquez, a SOMOS organizer and subscriber to Internet Essentials said that, “every morning, there is an issue of who has priority to use the internet: the parent who needs to work and provide for their family or the student who needs to pass their classes.”

The concern is that students will fall behind because they lack basic internet resources afforded to more wealthy families.

SOMOS, with the support of over 100 organizations, submitted a letter to Comcast on Friday.

They listed three demands which included:

Speaking at the press conference Baltimore City Councilman Zeke Cohen said, "“During the COVID-19 pandemic, if you can’t get online you can’t learn. This is an “All In” moment where everyone must unite to close the Digital Divide."

Comcast did respond to the student's letter. While no promises were made to the students, the company did outline what being done to help families stay connected during the COVID-19 crisis.

In a statement to WMAR-2 News regarding Baltimore’s digital divide a Comcast spokesperson said:

“For nearly a decade, there has been no company more committed to bridging the digital divide in Baltimore, and across the nation, than Comcast. Since its inception in 2011, our Internet Essentials program, which is the nation's largest of its kind, has connected more than 2 million low-income households nationally to the internet, serving approximately 8 million people, including 104,000 in Baltimore. To confront the COVID-19 epidemic, we proactively offered 60 days of free service to any new customers, waived all back due debt and opened thousands of Wi-Fi hotspots in outdoor and small business locations across the city. However, solving a problem as vast and complex as the digital divide requires collaboration across the city – with the school district, elected officials, nonprofit community partners and other private-sector companies – so everyone is part of the solution.”

To read the student letter look below:

To read the response from Comcast look below: