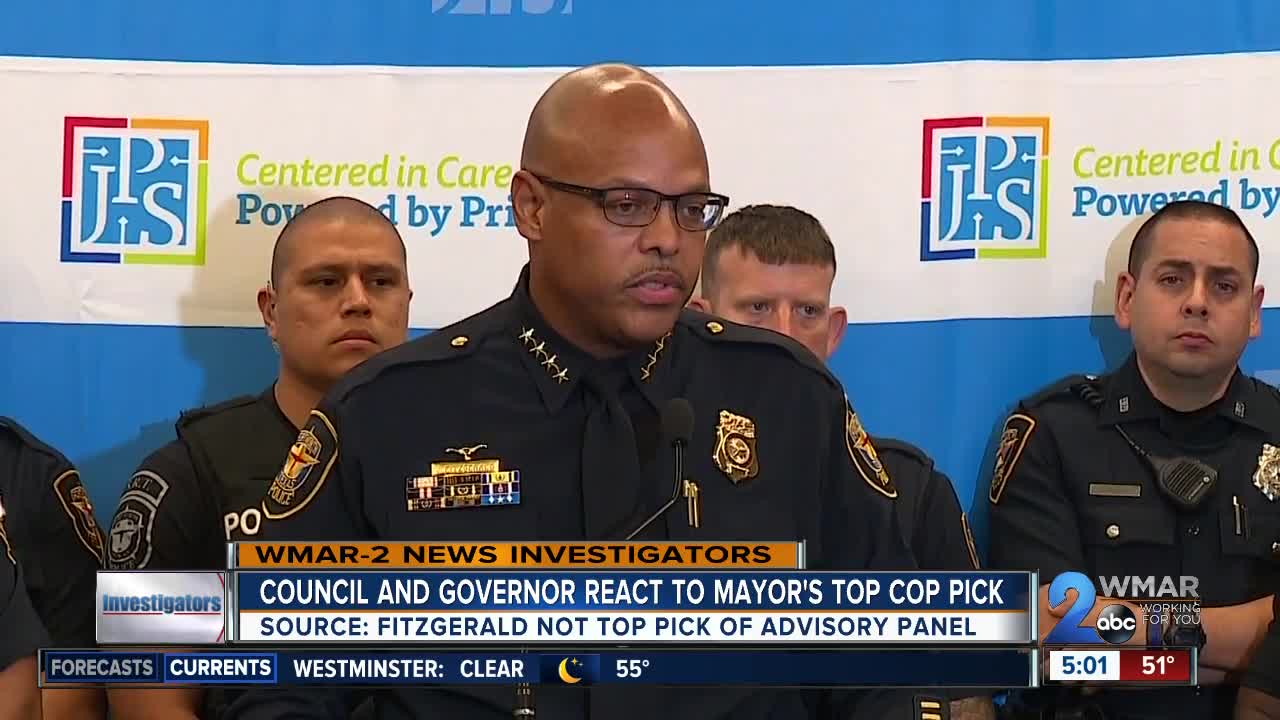 Sources tell WMAR 2-News that a panel counseling Mayor Catherine Pugh on her pick for the next commissioner of the Baltimore Police Department did not choose Fort Worth Chief Joel Fitzgerald as its top pick. 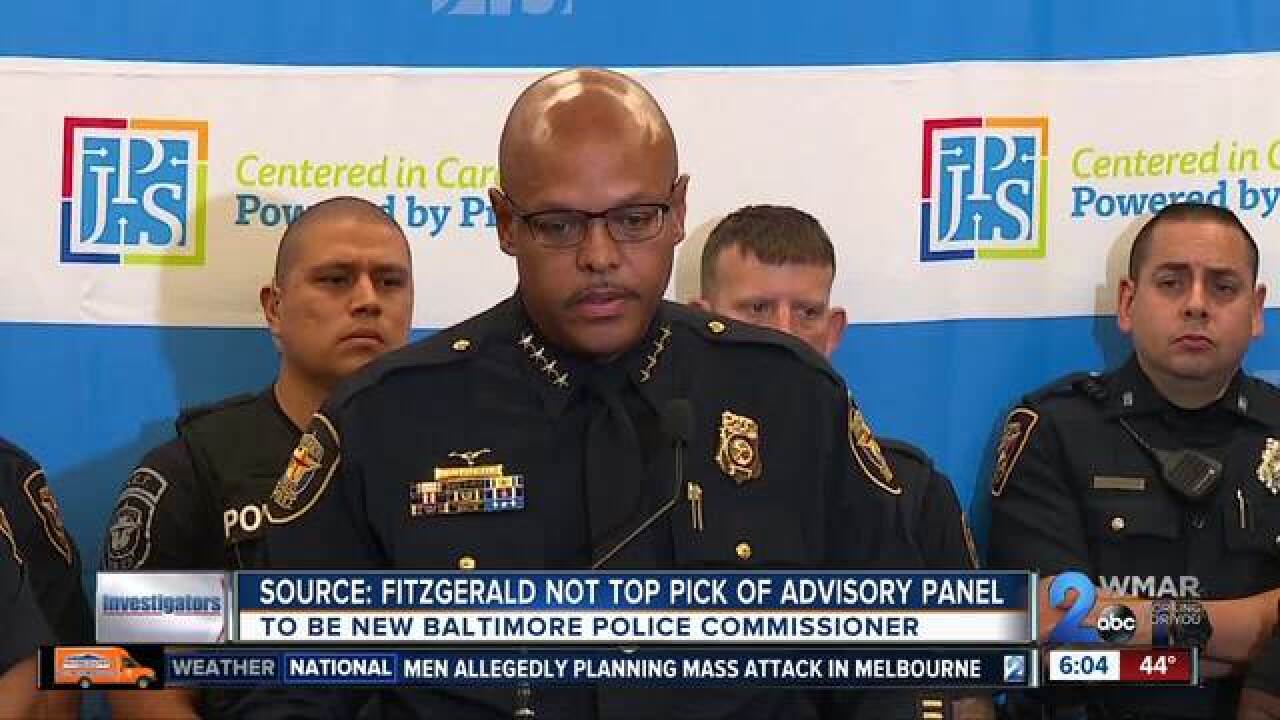 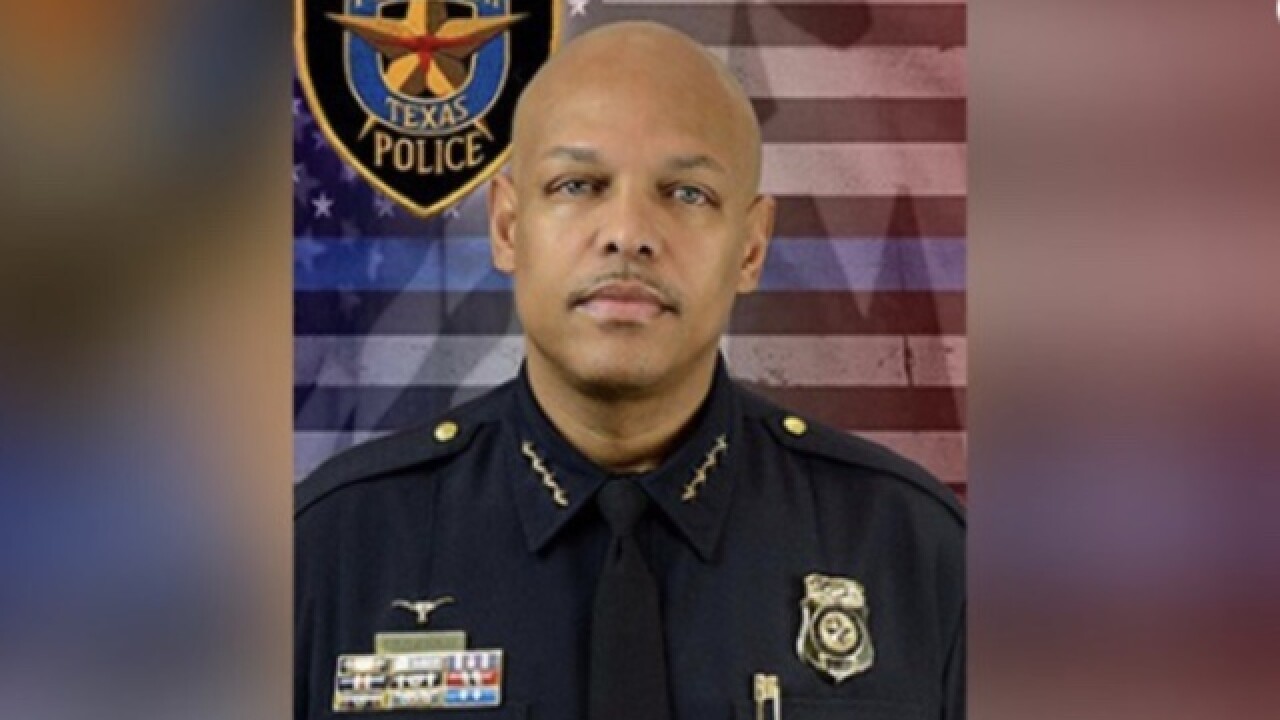 Sources tell WMAR 2-News that a panel charged with counseling Mayor Catherine Pugh on her pick for the next commissioner of the Baltimore Police Department did not choose Fort Worth Chief Joel Fitzgerald as its top pick.

The mayor has faced harsh criticism for the lack of transparency in what became a six-month-long process in picking the next Baltimore top cop.

Sources say the panel was comprised, in part, of other big city police chiefs and that they vetted at least six candidates for the job including three either former or current members of the Baltimore Police Department.

In the end, they say, Fitzgerald, while a top contender and qualified, was not their top pick choosing instead a candidate that had more experience with a consent decree and violent crime reductions.

Still, the mayor dismissed the recommendation and went with the Fort Worth chief, confirming as much Friday evening.

Monday afternoon, Mayor Catherine Pugh hosted a city council luncheon but after some brief remarks, she left the room without taking questions from the media.

The Council President says he is organizing a council delegation to travel to Fort Worth as part of a listening tour to study up on Fitzgerald and the job he's done there.

Among those traveling is Public Safety Chair, Councilman Brandon Scott who says neither he, nor any of his colleagues were aware of the mayor's process in choosing this commissioner.

"I've been very clear that this process should be different,” Scott said, “I think there should be a board of police commissioners and elected representatives so that the process is forced to be more transparent and forced to be more involved with the citizenry and other members of government."

But in the end, regardless of council members or even a recent panel of police chiefs, it is indeed the mayor's pick.

WMAR 2-News contacted the mayor's office for comment on this story. Mayor Catherine Pugh responded saying that panel did float several names for her consideration and that it came down to two candidates.

The mayor takes issue with Fitzgerald not being the top pick. She says the other candidate did not fill out an application and that she believed Joel Fitzgerald was the better fit for Baltimore.

Today the governor weighed in saying while he hasn’t met the candidate, it was about time.

The City Council President’s delegation will travel to Fort Worth on December 9th through the 11th. The mayor will formally submit Fitzgerald for the job on December 6th which then gives the council until January 28th to confirm him.

Council President Jack Young says there will be two hearings, one for the public and then one for the council beginning on the week of January 7th.