A post was spreading widely over social media about a potential crime spree in the city this weekend.

The post contained a screen shot of a text exchange, warning the reader to not go to the city on Friday due to a 'big gang initiation' scheduled for the weekend near the Canton and Chester area of Fells Point. The text also stated there were expected robberies and violent crimes involving 20 new gang members in the area. 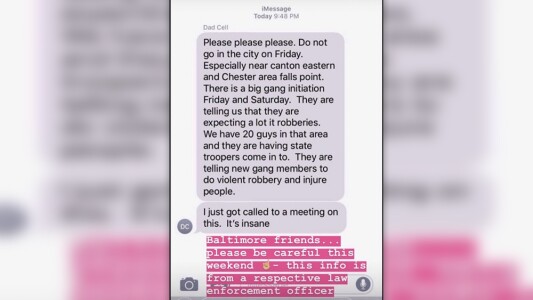 Who ever posted the text exchange said the information was from a police officer, but police have not been able to substantiate the claims.

City Councilman Eric Costello took the situation to social media saying this type of misinformation is reckless and extremely dangerous.

Whoever started and anyone who shared the attached rumor should be absolutely ashamed of themselves. This type of fear mongering behavior is reckless and extremely dangerous. pic.twitter.com/hMCLwyQ6i5

"It shows me that there's reckless people out there that don't care that are sharing rumors that are not true. BPD's gang and intelligence divisions are actively investigating it and they've found nothing to date that indicates that any of it is true so it's simply fear mongering," said Costello.