An imaginative menagerie took over the main hall of the Walters Art Museum for the Fourth Annual Baltimore Taxidermy Open.

The event celebrates creative, elaborate stuffed creatures – not the kind of trophy heads or mounted fish often found in hunting clubs or in rustic cabins. Called "rogue taxidermy," the creations are often distortions or brand new conceptions of animals, real or imagined.

The event has grown in it's four years of existence, said Alexander James Jarman, the Manager of Community Programs and Contemporary Art Initiatives for the Walters. Participants attended from far-off locations like Texas and Detroit, though the funky feel of the "dark art" exhibits certainly fit in Baltimore's unique art scene.

Click the picture below to see images from the Fourth Annual Baltimore Taxidermy Open: 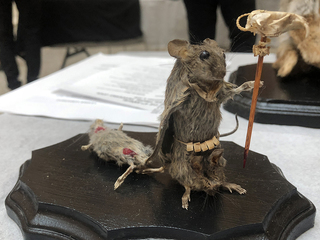