A new and improved Broadway Market is set to open in the next couple of months, and while the city staple will be keeping with tradition, new food and flavors will be coming as well.

On Wednesday morning, Baltimore Mayor Catherine Pugh announced what is to come for the Fells Point market.

“This is a really unique destination not only for our residents but for visitors alike. Over the next several months this space will be converted into a food hall market will 11 vendors,” explained Pugh.

The updated space will include an outdoor dining area, fresh seafood, new venues, as well as some familiar faces.

Click the picture below to see more of the rehabilitation of Broadway Market: 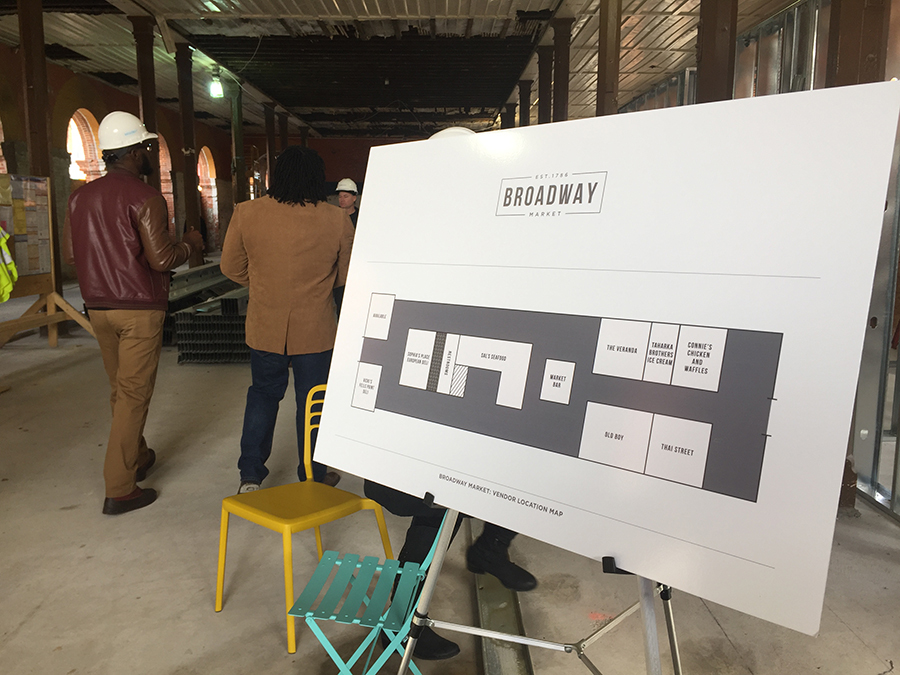 "What makes Broadway Market so special is not only it’s history, but for decades three vendors have kept the tradition alive," Pugh said. "We are thrilled that the tradition will continue with these three long-time vendors as vital parts in the North Shed."

City residents and visitors can expect to see Sal's Seafood, Sophia's Place, and Vikki's Fells Point Deli when the market opens. Some of the new places you can expect to see are Connie's Chicken and Waffles, Thai Street, The Verandah, Taharka Brothers Ice Cream, and a restaurant from Phil Han who owns places like Dooby's, Sugarvale, and Sunday's.

The other three restaurants have yet to be announced.

Below is a breakdown of each restaurant:

Sal's Seafood has been a Broadway Market staple since 2006. They sell lots of seafood and serve fresh crabs! For more information click here.

This traditional Polish Deli has been a part of the market since 1986. They serve Polish specialties like pierogis, stuffed cabbage, sausage, Polish soups, sandwiches, and more. For more information click here.

This deli has been a fan favorite since 1993 serving crab cakes, shrimp salad, cheesesteaks, homemade soups, and a whole lot more. For more information click here.

This chicken spot was inspired by two brother's love for home cooked meals by their mother Connie. In addition to your typical chicken and waffle dish, Connie's serves a variety of funky waffle flavors and they are constantly adding new options. For more information click here.

This Thai food pop up features authentic Thai street food all over Baltimore. You can often find them at farmer's markets and at events, but now they will have a spot at the Broadway Market. For more information click here.

Sitting in Hampden is this Indian street food mecca. Their menu features a variety of Indian food from wraps and salads, to samosas and chaats. For more information click here.

This ice cream is made in Baltimore and has a deeper message than just being delicious. Their ice cream stands for social justice and usually can be bought all over the Baltimore area. For more information click here.

In addition to the new eateries, the market will also have an all-day bar at the center serving house-made pastries, modern American cuisine, specialty coffee, wine, beer, cocktails, and more.

And while all the announcement of the restaurants coming to the market is exciting, Mayor Pugh said on Wednesday that the revitalization of this market is about more than just the food.

Many local businesses are part of the construction by physically working on the project, and by supplying materials to help build it.

“I am so proud that this project is inclusive of diverse local businesses and city residents displaying their talents. I know that Baltimore neighborhoods are its greatest assets and I am committed to reinvesting in neighborhoods," said Pugh. "Today we celebrate another step in a positive direction for our city, but we are not stopping with this project."

She continued to talk about how they are working on improving the entire Broadway corridor, the waterfront to North Avenue, Perkins Homes in the west, and Oliver and Broadway East in the north section of the city.

Pugh said during the conference the market will potentially open in the next two months, but an official open date has not been released yet.