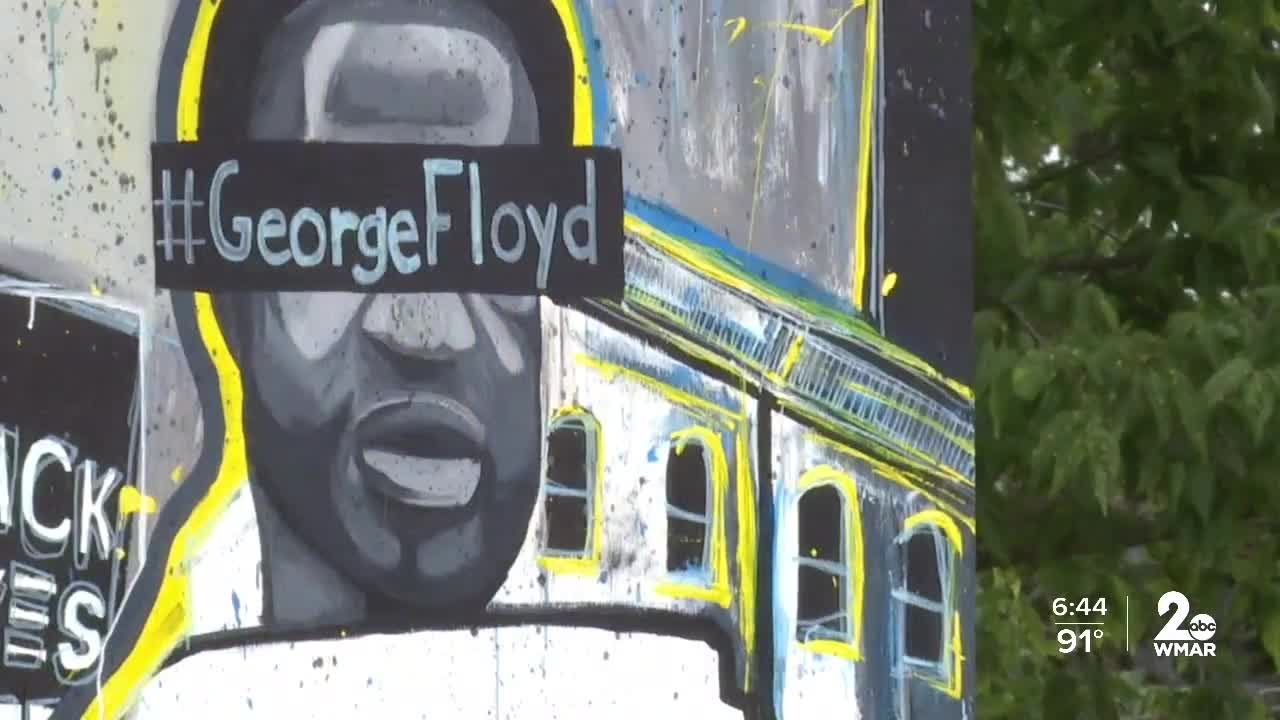 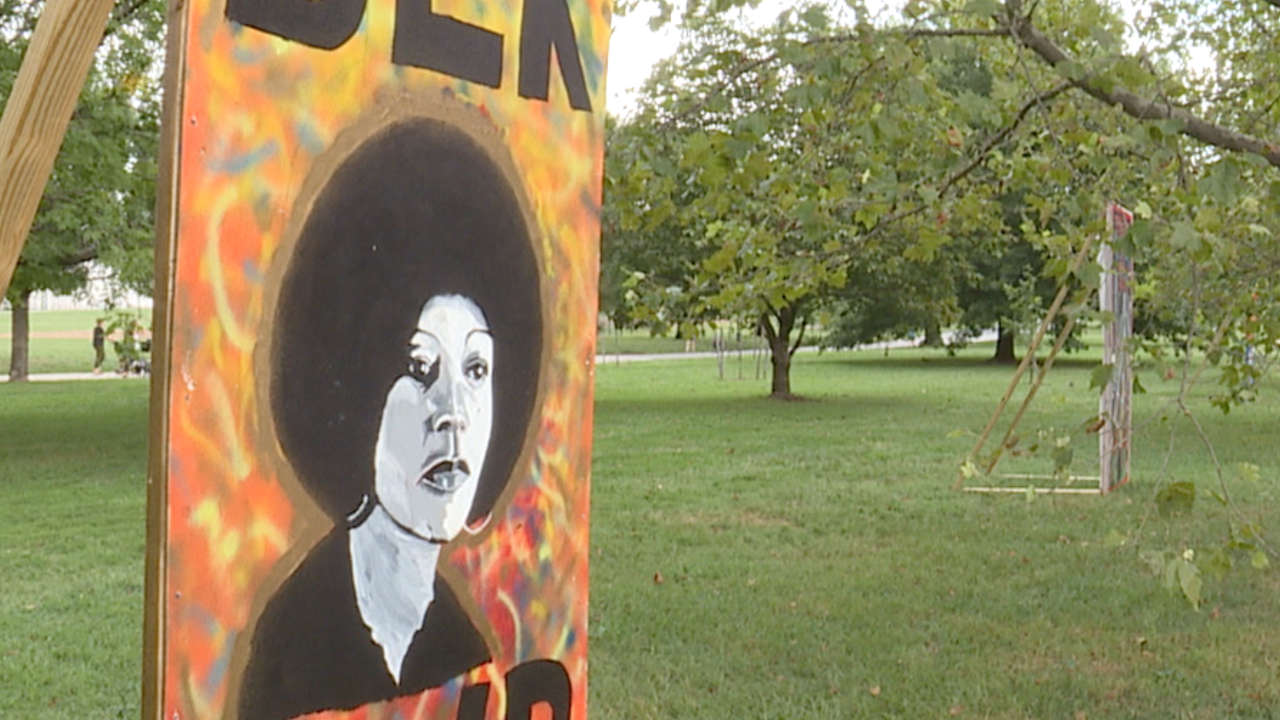 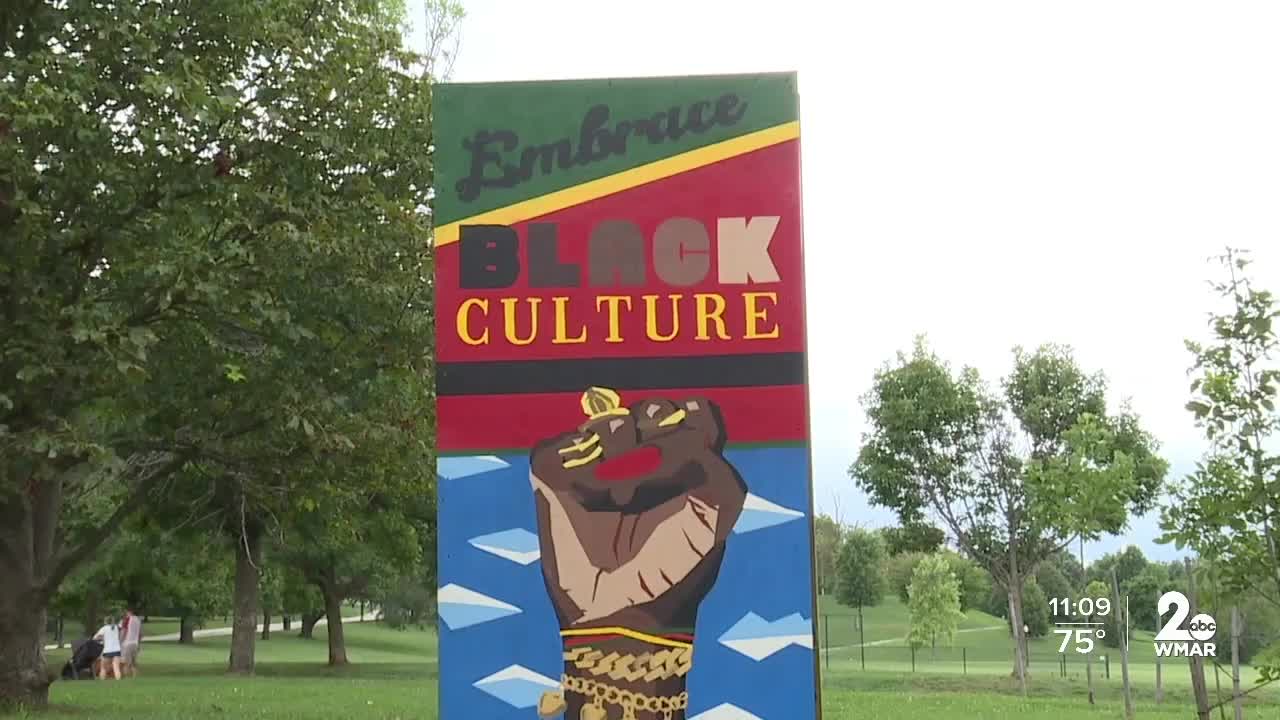 BALTIMORE — Angela Davis is an activist, author, and professor who was also part of the Black Panther movement.

Manning’s mural is one of 12 facing the Eastern Avenue side of Patterson Park.

Jordan Lawson painted a black woman’s fist adorned in jewelry with a Pan African Flag as the backdrop.

“If I can use my talents to make change that’s what I’m going to do,” Lawson said. “To see it on one of the most gentrified areas of the city. People that don’t look like me and they are appreciating this.”

Reginald Lewis is an art teacher at Forest Park High School. His mural is a tribute to George Floyd that reads “I am a man.”

“One of my missions is to share my artwork with the world,” Lewis said. “That’s why I teach because I want to pour into the youth that actually come from the same community.”

Karley and Joe Sgandurra wanted to do more so they organized the “Unity Through Art Project.”

“This project was a way for us to take it off of social media and bring it to the forefront of the conversation and put it front of a neighborhood where it can’t be ignored,” Karley said.

On Wednesday, they picked up their tools to put the pieces in the ground after a long process.

“Over the past 8 weeks getting all the proper documentation the planning the site plans the insurance to make sure everything is 100% correct and legal to set these up and we set them up Wednesday of this week,” Joe said.

Two days later, they started getting messages and pictures of Park Rangers ripping the murals out of the ground. The neighborhood responded and started protecting the installations.

“They ran out to the other murals that haven’t been damaged yet and stood by them on guard until we could get here,” Joe said. “One neighbor her name is Lydia she called her husband and they ran out and threw it on top of their car and hid it in their garage so the park rangers wouldn’t destroy it.”

A spokesperson for Baltimore City Rec and Parks said they granted a permit and looked forward to the final installation. Saying “Unfortunately, due to a recent change in staff, a miscommunication occurred resulting in the removal of some of the artwork. Due to the diligence of a community member, this was brought to our attention and the pieces were restored within the hour.”

The organizers want more of an explanation.

“For them to be ripped and thrown in the back of a truck without a phone call? We just want answers,” Karley said. “We don’t understand where the disconnect was. It’s just really unfortunate.”

Rec and Parks also acknowledged allegations that one of the rangers who was taking down the murals had been reported for racial misconduct in the past saying, that's not reflective of their values and they are investigating.

“My piece was one of the ones that got vandalized and taken down,” said Manning. “There’s some scratches on here but just like Angela Davis it’s tough and we just have to continue to work together and do things like this.”

When the 2 month permit is up, some of the murals will go to the Reginald F. Lewis Museum. Messages of love, resilience, and power for all to see. Baltimore City Councilman Zeke Cohen represents that area. He said he referred the issue to the inspector general.