More than 40 pets registered and presented themselves to judges to win playful, creative awards like Best Costume, Most Patriotic, Most Visionary Pet, Owner & Pet Lookalikes, Least Likely to Succeed as a Pet, Visionary Pet Tricks, and more.

Even more furry friends joined in for the stroll around the museum's block on Key Highway in Federal Hill.

The pet-friendly fest has been a part of AVAM's calendar since it's founding, with the first taking place in the summer of 1996, said Rebecca Alban Hoffberger, the Founder and Director of AVAM. The free event also honors a beloved former volunteer, the late Ellis Rosen, who was a lover of animals.

Dogs and owners splashed in kiddie pools and took to the shade to beat the powerful heat, but there were plenty of smiles to go with all the panting.

Naava Finkelstein and her turtle "Steve" took home the grand award of Most Visionary Pet. The 8 year old from Baltimore seemed overwhelmed with surprise and glee when accepting her trophy.

Click the picture below to see images from AVAM’s Fourth of July Visionary Pet Parade: 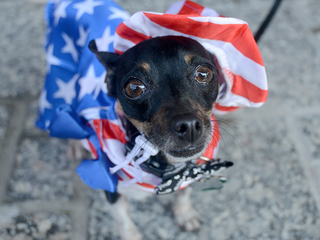