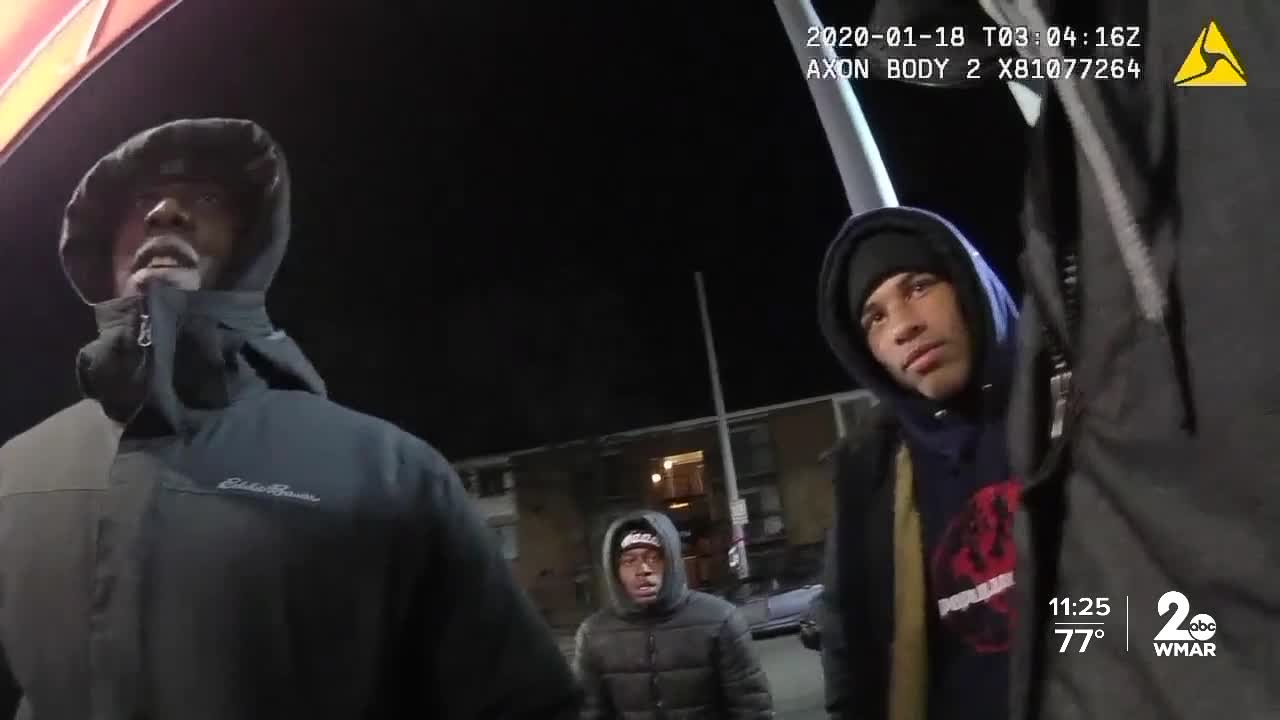 WMAR-2 News obtained new video from defense attorneys of the confrontation that landed two men in handcuffs and charged with assaulting a Baltimore City Police Sergeant.

The incident happened on January 17.

RELATED: Charging Docs: Suspect assaulted, spat on sergeant after accidentally being bumped into

A total of three people were arrested off the statement of that Sergeant, along with a viral video and city cameras.

WMAR-2 News’ Eddie Kadhim was the first TV reporter to get the body camera footage that tells a different story than what was initially released.

The first shows you what happens from the moment the officer gets out of his car to when his body camera was knocked off.

We also have two more videos and a statement of probable cause from another officer who defense attorneys say wasn’t at the scene who used facts from Sgt. Simpson.

This viral video caused an uproar that lead everyone from the Governor to the Mayor to the States Attorney to call for swift justice for those involved in attacking this officer.

Sgt. Simpson said his body camera wasn’t on because the incident suddenly started and he wasn’t able to activate it.

On Thursday, when the new videos were released a spokesperson from the police department sent this statement

“Today, the Baltimore Police Department received video related to an arrest made by Sgt. Simpson on January 17, 2020. The video has been handed over to our Public Integrity Bureau for further review.”

“His camera was on, was on the entire time and he never turned it off,” said Finegar. “It was portrayed that this incident was not captured on body camera footage at all and it was completely captured up until the time that Mr. Abdullah reflectively pushes the officer off of him after being assaulted by the officer.”

The video ends with Sgt. Simpson pushing Abdullah and Abdullah responding by pushing back apparently turning the body camera off.

“At one point Sgt. Simpson says go ahead I have enough for everybody,” Pruette said. “Not only has he initiated he’s than not de escalating the situation not moving on. He’s actually escalating by saying go ahead I’ve got enough here for everybody and we all know what that means.”

We also just gotbody camera footage that was attached to a responding officer that coincides with Sgt. Simpson’s initial statement of probable cause.

The attorneys say neither is factual because Abdullah never spit in the officers face like Sgt. Simpson claims and refutes that Abdullah pushed Sgt. Simpson first.

Here’s a transcript of that video.

For context you can hear Abdullah yelling his side of the story from the ground in handcuffs.

“Trying to clear them out.”Simpson.

“You told me to get the f out your way.” Abdullah

“He wouldn’t move he was blocking the doorway.” Simpson

“And you told me to get the f out your way.” Abdullah

“So I pushed past him.” Simpson

“You pushed me.” Abdullah.

“To get in the doorway. He turns and spits in my face and he pushed me.” Simpson

“He pushed me.” Abdullah.

“I pushed him back and the fight was on. I don’t know where my camera went.” Simpson.

The last video is a cell phone video that shows a different angle of the struggle shown in the initial viral video released in January.

Here is some of what can be heard from people standing around Simpson and Abdullah.

What is you doing?

What is you doing.

“Your on my neck I can’t breath.” Abdullah.

What is you doing to get off his neck yo.

This video ends with Burgess dragging Abdullah away from the officer.

We reached out Baltimore City States Attorneys about these new videos and spokesperson Zy Richardson sent this statement back.

“We cannot legally or ethically comment on open and pending cases or investigations still under review, as is the case at hand. As always, we will be transparent with the public about our decision and publish any relevant information, if and when the time comes."

The defense attorneys are calling on Mosby to drop all charges and publicly apologize to their clients and for Sgt. Simpson to be charged.

The attorneys say both their clients are on house arrest and facing felony charges.