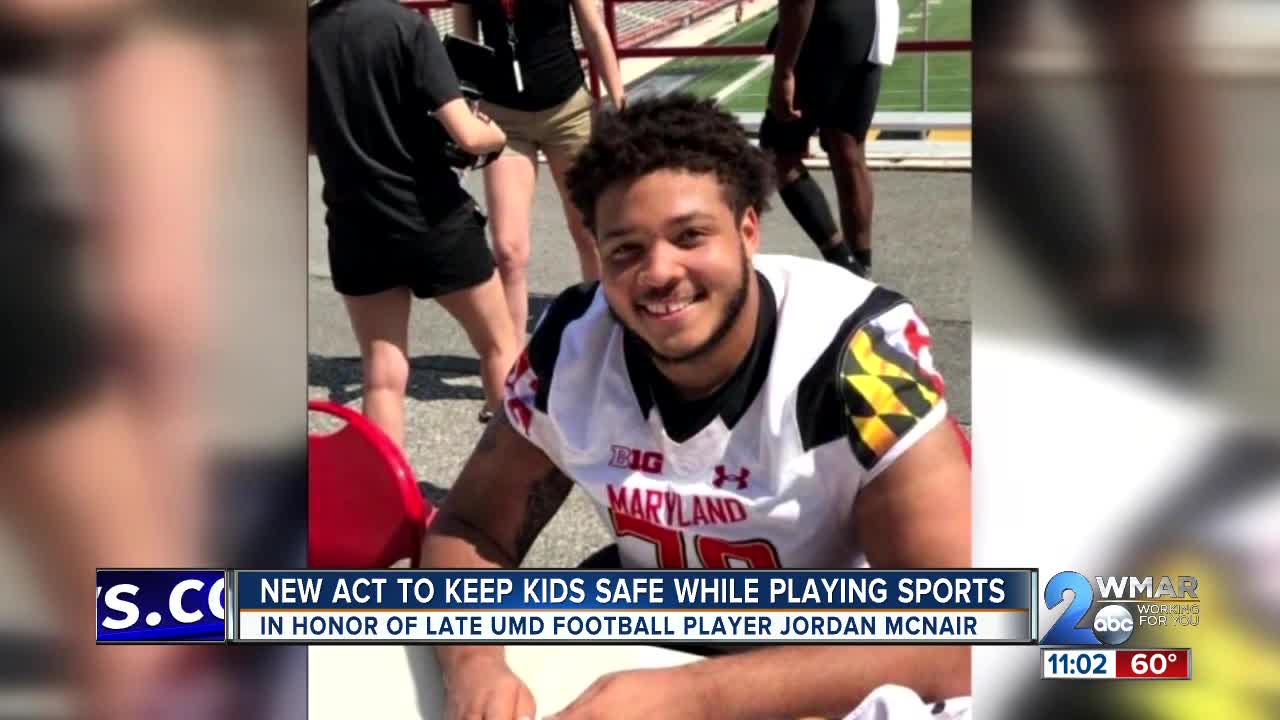 The Baltimore City Council passed the Jordan McNair Youth Athletic Protection Act, aimed at keeping Baltimore athletes safe by requiring training and equipment for all youth team officials that use Department of Recreation and Parks facilities.

BALTIMORE — "The more people that know about this awareness, education and prevention, that will be more lives that we can save," said Marty McNair.

Ever since his son Jordan McNair died from heat-related injuries sustained at a University of Maryland football team practice the summer of 2018, he and Jordan's mother have been working to keep his legacy alive.

"Heat stroke is 100% preventable. My heart goes out to all the families that have lost their kids. Jordan was my only child," said Tonya Wilson.

They started a foundation and the latest development, legislation. Monday, the Baltimore City Council passed the Jordan McNair Youth Athletic Protection Act, aimed at keeping Baltimore athletes safe by requiring training and equipment for all youth team officials that use Department of Recreation and Parks facilities, like the 45 rec centers and 215 ball fields. Outside leagues, all the coaches and team parents, will now have to take six trainings before getting a permit to use the property.

"Department of Recreation and Parks requires that training. The school system requires that training... The major leagues require that training but there are hundreds and hundreds of teams that use Baltimore City's facilities today that are not a part of any of those leagues and they do not have to have these trainings," said Council President Brandon Scott. "We want to make sure that every young person that is participating on a public field, that the people that are coaching them and working with them on that team, in that sports program, are trained to make sure that they can keep them as safe as possible."

"We have to for heat exhaustion, the basics for CPR, basic healthcare. It's just making sure that we are responsible for the players on the field," said coach Latwone Bethea.

Because of the coaches for the C.C. Jackson Nighthawks football team though rec and parks, Bethea was already required to take the trainings and said fortunately, he hasn't had to put them practice. But he feels prepared if he ever has to.

"You never know what's going to happen. You try to coach to make sure it doesn’t occur. Good processes. Good tackles. Good fundamentals, but if it doesn't happen, and things do happen on the field, I would feel confident being able to help," said Bethea.

The legislation also requires coaches to have access to a defibrillator in case of an emergency so rec and parks will get money to provide portable AED's closer to fields. Finally, it also makes sure all coaches and team parents report cases of suspected child abuse.

McNair's father said it's Just one more way Jordan continues to make an impact after his death.

"I knew he was special but I didn't know he was this special. I thought he would be special protecting some quarterback on Sundays. I never thought that he'd be touching the whole sports world in a sense," said McNair.

The legislation now heads to the Mayor's desk for his signature.