BALTIMORE — Representatives for the Maryland Zoo went out of the country last week to help save flamingo chicks that were abandoned during a drought.

The zoo announced on Thursday they sent Jess Phillips, Area Manger for Penguin Coast, to Cape Town, South Africa, to help support the rescue and rehabilitation of 285 lesser flamingo chicks who were abandoned at their nesting grounds during a January drought. Phillips was sent to the Southern African Foundation for the Conservation where the zoo has helped with African penguin rehabilitation over the years.

The zoo said the rescue happened at Kamfers Dam in Kimberley, about 600 miles from the South African coast, after the 1200-acre lake began to dry up, causing thousands of flamingos to abandon their eggs.

“Kamfers Dam is one of the most important breeding sites for lesser flamingos in southern Africa,” said Phillips. “To see adults abandon their nests, leaving eggs and chicks behind is devastating, and when our colleagues at SANCCOB reached out to us for help, we quickly mobilized an emergency response.”

In Africa, Phillips is feeding, cleaning, monitoring, and checking out 75-100 birds during his shifts. Phillips says the chicks need to be fed every three hours, but there is still time for them to go outside for sun and a swim or paddle.

Click below to see more adorable pictures of the chicks: 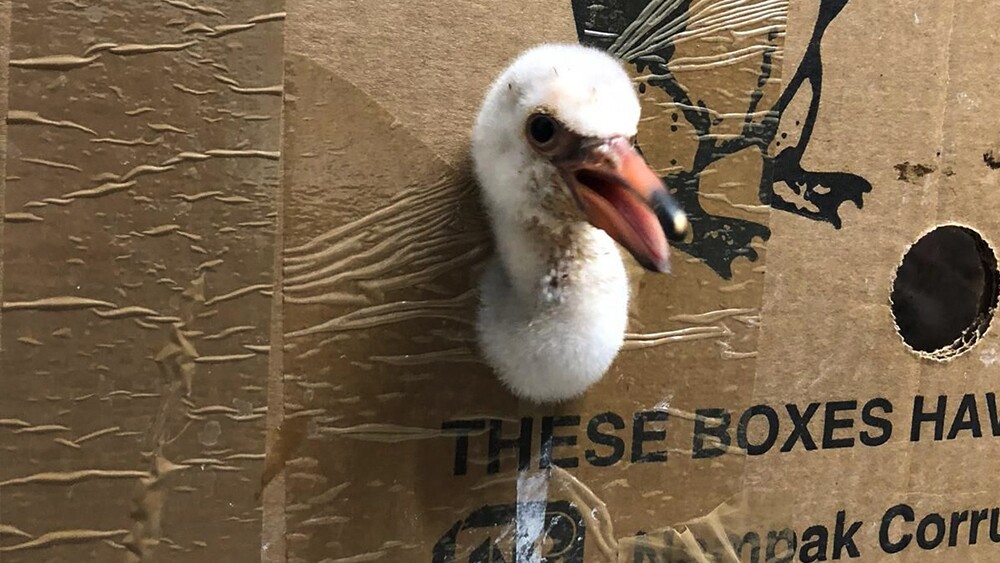 "The chicks have to be constantly monitored, especially as they are unable to regulate their temperature,” said Phillips. “It’s still summer here in South Africa, and the rooms the chicks are in are kept at around 90-95 degrees, so it's pretty warm to be working in there, but it’s best for the chicks.”

Lesser flamingos one of six species of the bird, and are listed as near threatened by the International Union for the Conservation of Species. They usual live in super-alkaline lakes in southern and eastern Africa, and in southwestern Asia.

“The first week with the chicks was tough and we suffered some losses, but the majority are doing well and growing stronger daily,” concluded Phillips. “There are a lot of partners working together on their behalf and sites are being surveilled for releasing the fledglings when the time comes. This is a long-term effort, and I am very proud to represent The Maryland Zoo and do what I can to support SANCCOB and the flamingos.”

For updates on the flamingo chicks, go to www.marylandzoo.org.