The Maryland Zoo will soon be getting two new polar bear cubs from it's one adult polar bear, though not through traditional biological means.

The zoo announced that its 23-year-old female polar bear Anoki will be sent to another accredited zoo, and in return two new female polar bear cubs will make their home in Druid Hill Park. The two new cubs, Neva and her half-sister Amelia Gray, come from the Columbus Zoo and Aquarium.

“We are tremendously fond of Anoki here at the Zoo, so this is bittersweet for us,” stated Don Hutchinson, president/CEO of The Maryland Zoo. “On a national level, the moves have been recommended by the AZA’s Polar Bear Species Survival Plan® (SSP) and we are happy to welcome the bears from the Columbus Zoo later this year.”

The zoo welcomed in Anoki from the Albuquerque BioPark in New Mexico in 2009. Her departure date has not been set, but fans and admirers are told to head to the zoo soon if they'd like to say goodbye.

Anoki has been part of the Cincinnati Zoo's Conservation and Research of Endangered Wildlife reproduction project recently, as zoos try to combat the polar bears' frustratingly low reproduction levels.

Amelia Gray, Neva, and her twin brother Nuniq, were the only polar bears born in North American zoos in 2016. Amelia Gray was born Nov. 8, 2016. Her name is significant if not obvious. Amelia means "defender," and "gray" is a nod to a small patch of fur on the left side of her neck. Neva, which means "white snow", and Nuniq, who is named after his father Nanuq, were born Nov. 14, 1986.

Polar bears are native to the "circumpolar north," the zoo said, which includes portions of the United States, Canada, Russia, Norway, and Greenland (Denmark). Populations have been declining, largely attributed to the reduction of sea ice, which the bears rely on to hunt and travel. Experts estimate there are only between 20,000 and 25,000 polar bears left in their natural range in the wild.

Click the picture below to see images of Anoki, Amelia Gray and Neva: 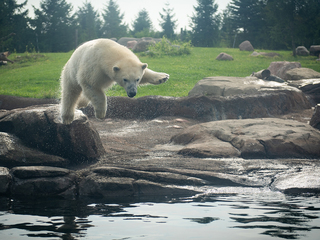