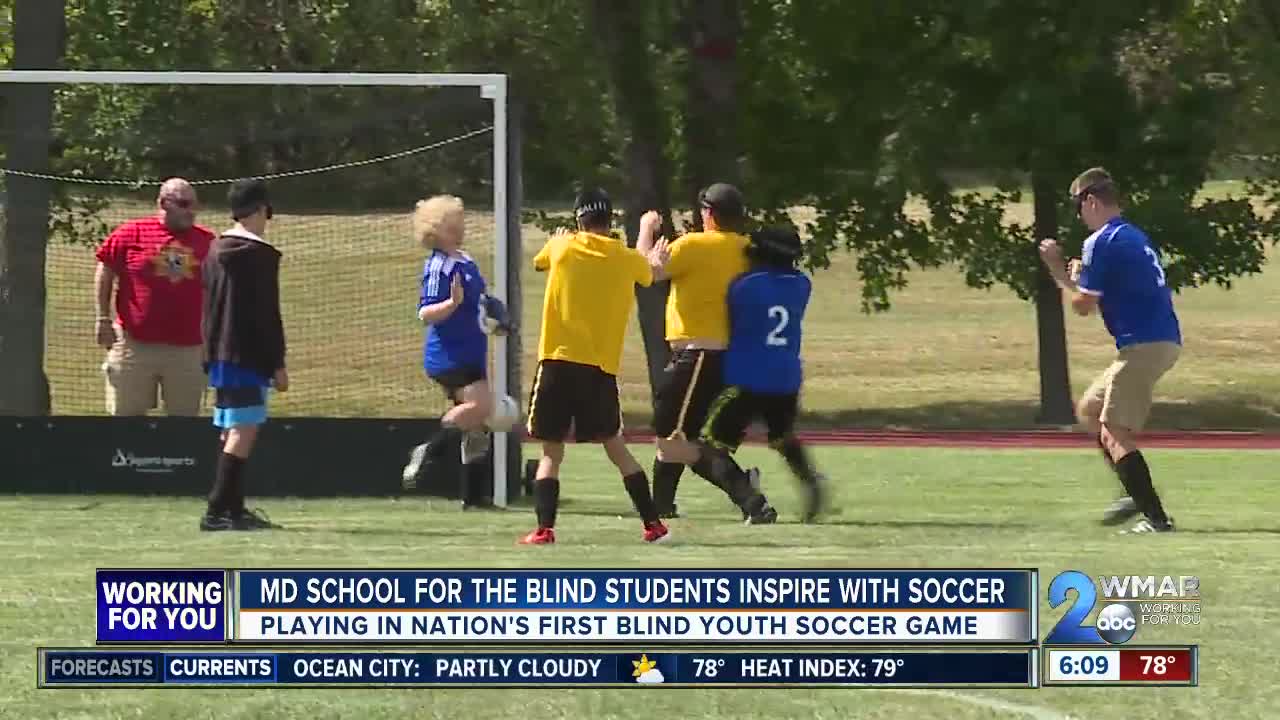 Maryland School for the Blind students played in the nation's first ever official competitive blind youth soccer match Tuesday against the Virginia School for the Deaf and the Blind.

BALTIMORE — "It shows that we have accomplished something great as a team," said goalie Taiye Akanni.

It's an accomplishment worth celebrating. Akanni and his team with the Maryland School for the Blind played in the nation's first ever official competitive blind youth soccer match Tuesday against the Virginia School for the Deaf and the Blind.

"I love sports and I wanted to try something new so I was just like you know what, why not try soccer?" said VA player Brianna Engleman.

It was a match up years in the making.

"Our kids have been working really hard for the past couple of years. They've been training, playing some of the staff members, playing each other and working on drills," said head soccer coach Timothy Taylor.

The sport of 5-a-side soccer was introduced at MSB two years ago with a six week training session for MSB student athletes ages 12-18. Since that time it has been a club sport as the students have learned the game, but now soccer is an official varsity sport at MSB. Several other schools for the blind across the country followed their lead so now they can play each other. Players said it brings more of a competitive team experience than other sports already offered, like track and field, swimming, wrestling and cheerleading.

"I like playing a competitive sport. It's active so you have to move around," said Akanni.

"Just having fun and having everyone communicate with each other," said Engleman.

That communication is key during the game. Since there are different levels of impairment, all players, except the goalie, wear shades to level the playing field. There are some other adaptations too, including a Swedish ball that has metal in it to players can hear it. The goalie and coaches also give direction to aid the players on the field, steering them in the direction of the goal.

The field at the MSB campus in Baltimore is unique too. It's the first and only full size regulation blind soccer field in the country. It's smaller than a normal soccer field and is lined with kickboards to keep the ball in play.

"We use the boards as a sixth teammate to follow boards," said Akanni.

Aside from scoring, their bigger goal is to grow the sport across the country.

"That would definitely be one of the best dreams to come true if we can keep it going... One game can turn into a lot more," said Akanni.

Ultimately they hope to field the country's first blind soccer team for the 2028 Paralympics.

"I’m hoping with this game we can identify a couple athletes and maybe these athletes can be one day, 8 years from now, can be on that team," said Taylor.

A dream that seems far way for now, but these players hope their determination serves as inspiration for people today.