In a week full of tradition, another fan favorite took place at Pimlico Race Course as the Maryland Jockey Club hosted their annual Alibi Breakfast, held in the grand concourse Thursday morning.

Started as a way for trainers, jockeys, owners, and press to exchange stories and get a sense of the field and the horses, it became a gathering where horsemen could craft their “alibis” as to why they would or wouldn’t cross the finish line first.

Racing fans who attended enjoyed an indulgent spread full of breakfast staples like waffles, made to order omelets, home fries, and fruit salad, as well as special Baltimore additions like crab cakes, fried chicken, and shrimp and grits. The mood of the reception was immediately jocular and inviting, as host Scott Garceau promised Saturday’s weather would be “75 and sunny,” despite the gloomy weekend forecast.

The main attraction of the morning’s breakfast, though, was the owners and trainers of the eight horses vying for the Preakness Stakes. Four horses come competing in the Kentucky Derby two weeks prior, while four new entrants joined the field.

Baffert talked of the surprising ascent of his horse, going from a possible competitor to a Derby winner in just 75 days.

“He brought himself along. It’s incredible,” Baffert said. “Our horse is quick, but a lot of things can go wrong in racing. … We definitely have the horse to beat.”

Lukas jokingly offered to trade his two horses, and some cash on the side, for Baffert’s frontrunner.

Justify is “a man amongst boys,” Lukas said, comparing the impressive steed to the most recent Triple Crown winner. “It’s your race to lose Bob. … We could have another really special one right on the heels of American Pharaoh.”

Baffert also had plenty of warm words for Pimlico and Baltimore, calling this race his favorite of the Triple Crown, horse racing’s grand circuit that includes the Kentucky Derby, the Preakness, and the Belmont Stakes.

“This is a very horsemen welcoming track,” Baffert said. “I always leave here, win lose or draw, it’s a great experience. … Baltimore is such a beautiful little city. … The whole city embraces the Preakness. It’s awesome.”

There has been much debate in the state about the potential of the Preakness being moved from Baltimore to Laurel, Md., where the Stonach Group, the racing consortium that runs Pimlico and Laurel Race Track, has invested heavily in recent years.

“I think if it left Pimlico, Baltimore, I don’t know if it would be the same,” Baffert said after the breakfast. “When you break tradition it’s really hard to gain it back …. I would hate to see it. I like this place. It’s got a lot of charm. It’s old. But there’s a lot of charm. I love the people who work here in Baltimore. … I think it would take away from the Triple Crown part, it might not mean as much.”

Each year the United States Postal Service establishes a special branch at Pimlico during Preakness week, where patrons can purchase specialty stamps and other memorabilia. Hall of Fame jockey Edgar Prado was named Honorary Postmaster of that branch, as his career of more than 7,000 wins was celebrated. He remarked on all the great people he has met in his career and all the places it afforded him to go, but he gave credit where it was most due.

“The most important is thank you to the horses,” Prado said, “because I fall in love with them.”

Click the picture below to see photos from the Alibi Breakfast: 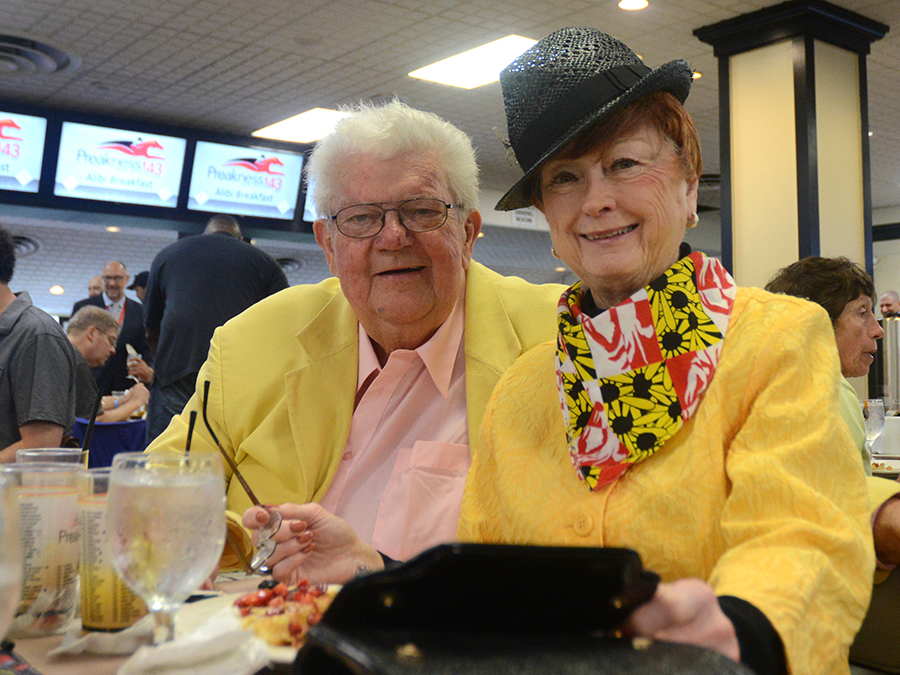