Exonerated but not free 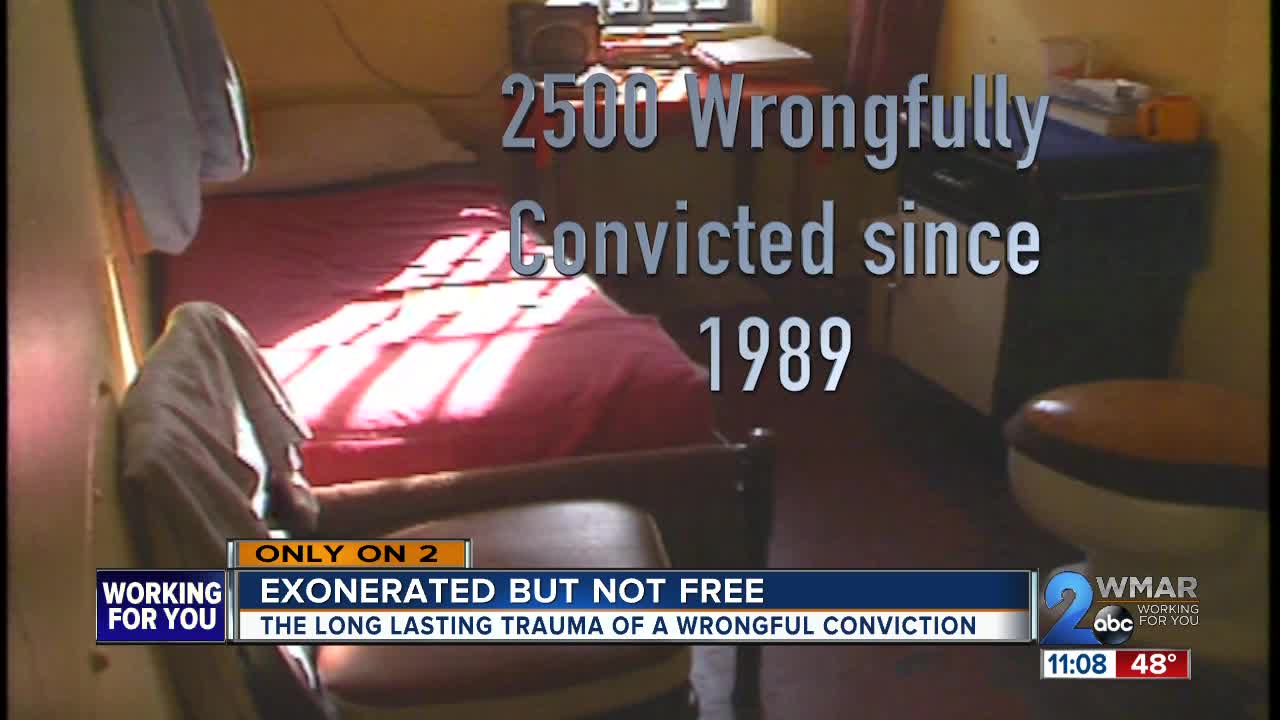 For nearly 25 years Eric Simmons sat in his cell knowing he should be anywhere but there.

BALTIMORE — For nearly 25 years Eric Simmons sat in his cell knowing he should be anywhere but there.

In May of 2019, he was finally exonerated alongside his brother. Eight months of freedom doesn't come close to 25 years of life changing experiences in prison.

There are no measures that can give back what was taken from him.

Most of his adult life isn't relatable to anyone. Talking to people at family gatherings is awkward.

“I was like a welcome stranger there,” he said. “Everybody is looking at you and talking in a way like they don’t know about you, and they don’t. Even at Thanksgiving, everybody was laughing at my cousin’s house. I snuck off upstairs and went into a back bedroom. I just stayed up there for about an hour by myself until somebody came looking for me.”

Simmons spent 25 years in a jail cell convicted for a crime he didn't commit.

Grateful isn't the word he would use to describe regaining his freedom.

“People would think that if a man just got his freedom, he’s good he’s okay. Not when you’ve been in there for 25 years and the thing you knew best was being in there.”

The news crews were there as he took the first steps as a free man towards the mirage of a life he dreamed of.

“It was to the point where I’ll eat in my bedroom and won’t go out.”

He is thankful that current Baltimore City State’s Attorney Marilyn Mosby heard his plea and has been forward thinking when it comes to getting wrongfully convicted men out of prison cells.

Faith and family are the pillars that hold him up.

A lot has changed since 1994, including the price of his favorite snack.

“I dreamed about McDonald’s french fries and every time I go now I have to get two orders,” said Simmons.

The Mid Atlantic Innocence Project ignited the flame to regain his freedom and fanned it until the day he got out.

“We try to use what we’ve learned from their cases to ensure that fewer innocent people go to prison and that the innocent people who are there have a way to get out,” said Executive Director Shawn Armbrust.

Simmons' story is just one of the more than 2,500 wrongful conviction cases in the united states since 1989.

“Once the police have a theory it is very difficult if not impossible to shake anyone from that theory,” Armbrust said. “Even in cases where we’re looking at it with 20-30 years of hindsight, you go well this is obvious how did anyone miss it? It’s tunnel vision.”

The non-profit’s mission is to prevent and correct the conviction of innocent people.

They get around 350 new requests a year-- mostly people writing from their cell.

They find freedom by combing through evidence files with a fresh set of eyes, using advances in forensic technology, and reaching out to witnesses.

“We’ve been very lucky in Baltimore City because we have this incredible partnership with the State’s Attorney and that cuts down on the amount of time it takes,” Armbrust said.

A lot of the job for Armbrust and the Innocence Project is managing expectations.

“We definitely close cases, not because we think people are guilty, but because we can’t find that witness who lived at this one corner 20 years ago because the documents are destroyed and there is nothing we can learn.”

In Simmons case the word of a scared teenager and a paid police informant was enough to convict him and his brother of killing a 21-year-old man he said he had never met.

“They convicted us on a 13-year-old kid who they coerced. Who they took to homicide at 6 in the morning and didn’t record his statement until 1 in the afternoon. There was one other witness, it was a lady who lived around the corner who we found out was a paid informant and had been witnessing homicides.”

The 13-year-old later recanted -- they were convicted anyway.

25 years and 8 months based on a recanted statement and testimony of a paid informant.

“You try your best to have conversations with your children that would lead them on the right path. There’s only so much you can do as a father in prison. You get 30-minute phone calls and an hour visit, once a week. That’s not a stage for good parenting at all.”

How could he feel anything but anger and pain at the beginning?

“That’s going to eat you up, and that’s not a good place to have a bunch anger, a bunch of resentment because you’ve got to also survive in there.”

Talking to other exonerees is helping him as he makes the transition.

“An exoneree can look in the eyes of another exoneree and understand what’s going on right there. That like all Innocence was taken away.”

25 years and eight months for a crime he did not commit.

Seeking normal, feeling like a tourist in the city he was born in.