With this rigatoni, I thee wed 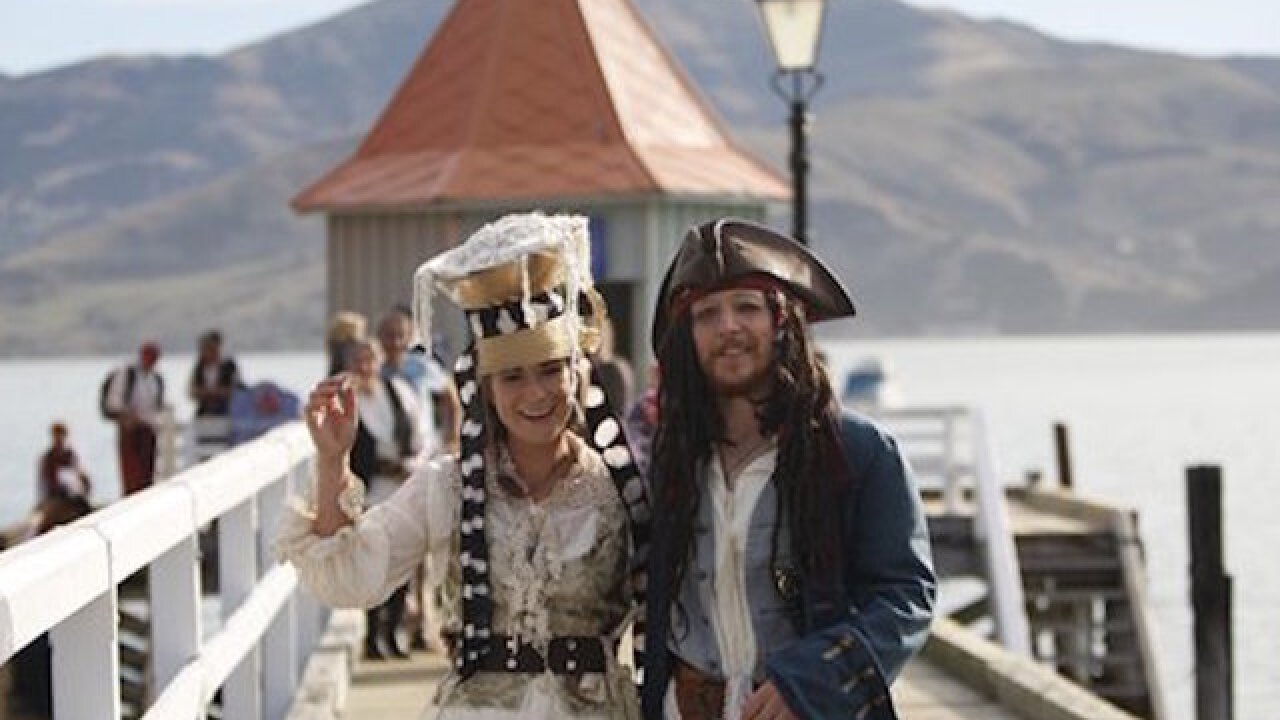 Copyright Associated Press
Nick Perry
<p>Bride Marianna Fenn and bridegroom Toby Ricketts stand on a jetty in Akaroa harbor, New Zealand, Saturday April 16, 2016. New Zealand hosted the worldís first Pastafarian wedding, conducted by the Church of the Flying Spaghetti Monster. The group, which began in the U.S. as a protest against religion encroaching into public schools, has gained legitimacy in New Zealand, where authorities recently decided it can officiate weddings. (AP Photo/Nick Perry)</p>

AKAROA, New Zealand (AP) — The wedding rings were made of pasta, the ceremony was held on a pirate boat, and when it came time for the kiss, the bride and groom slurped up either end of a noodle until their lips met.

New Zealand on Saturday hosted the world's first Pastafarian wedding, conducted by the Church of the Flying Spaghetti Monster. The group, which began in the U.S. as a protest against religion encroaching into public schools, has gained legitimacy in New Zealand, where authorities recently decided it can officiate weddings.

Saturday's ceremony was all about having fun. The guests came dressed as pirates and shouted plenty of hearty "Aaarrrhs." The groom, Toby Ricketts, vowed to always add salt before boiling his pasta, while bride Marianna Fenn donned a colander on her head.

The church claims that global warming is caused by pirates vanishing from the high seas, and that there is a beer volcano in heaven.

"The Flying Spaghetti Monster created the world. We know that," said marriage celebrant Karen Martyn, aka the Ministeroni. "We weren't around then and we didn't see it, but no other religion was around to see it either, and our deity is as plausible as any other."

The church has been battling to gain legal recognition around the world, with mixed success. It was formed in 2005 as a way to poke fun at efforts in Kansas public schools to teach not only evolution, but also "intelligent design" — the idea that the universe must have had a creator.

Church founder Bobby Henderson said in an email that he thought it was odd that most weddings still have such an entanglement between religion and government.

"It's sad that so many people feel pressured to do the traditional Christian wedding even when they don't relate to much of the religion," he said. "If people can find some happiness in having Pastafarian weddings, that's great, and I hope no one gives them any flack about it."

Ricketts, 35, a voiceover artist, and Fenn, 33, a lawyer and photographer, said they've been a couple for four years but decided just three weeks ago to get married, after another Pastafarian couple's plans to be first to wed fell through.

Ricketts said he found out about the church because he's been making a documentary about why religions don't pay taxes.

Fenn said she grew up on a small New Zealand island where people had alternative ideas about how to lead their lives.

"I would never have agreed to a conventional marriage, but the idea of this was too good to pass up," Fenn said. "And it's a wonderful opportunity to celebrate my relationship with Toby, but in a way that I felt comfortable with."

The wedding feast was an all-pasta affair, while the wedding cake was topped with an image of his noodliness, the Flying Spaghetti Monster.

Martyn said she hoped people could find happiness in eating, drinking, being with friends and being kindhearted.

"That be what we're all about," she said.