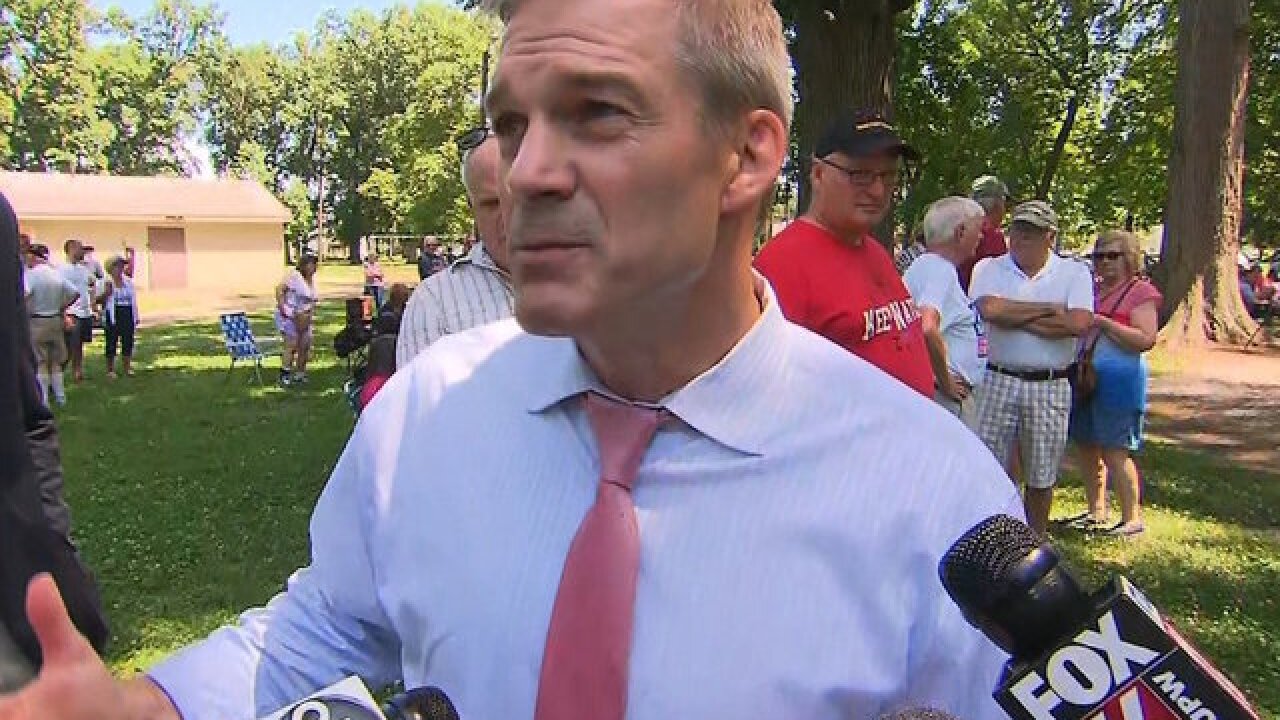 Multiple members of the conservative House Freedom Caucus say they are "uncomfortable" with the scrutiny growing around whether Republican Rep. Jim Jordan of Ohio turned a blind eye to alleged abuse, but those conservatives are taking a "wait and see" approach for the time being, according to one source Monday who is familiar with their thinking.

"The members are taking a wait and see approach," the Republican source told CNN. "They aren't making any judgments on him yet."

The source said Jordan's relationships within the House Freedom Caucus are strong, with his colleagues seeing him as a "good man who was probably just in a bad situation." Jordan, a co-founder of the conservative group, is among the high-profile House Republicans considering a run to replace Speaker Paul Ryan when he retires at the end of his term.

However, there is an acknowledgment that some caucus members are skittish about putting their necks on the line without yet knowing the full story of what happened at Ohio State University.

"It was expressed to me by one member that after Joe Paterno, you never want to go too deep in defending somebody, because you can have somebody who was just almost seen as an otherworldly figure of integrity and then you find out that 'Wow, he really did know more than we thought he did. He really didn't do what he should have done,'" the source told CNN. "And I think that is always going to taint these kind of situations."

Amid serious accusations that Jordan ignored allegations of sexual abuse while he was assistant wrestling coach at Ohio State University, a request was filed Monday with the Office of Congressional Ethics to launch a preliminary investigation into Jordan's denials that he had been unaware of abuse.

"This is a very serious matter that directly reflects on the integrity of the House of Representatives as an institution and on the credibility of its Members," states the request filed by Norm Eisen, President Barack Obama's ethics czar, and Fred Wertheimer, president of Democracy 21, a nonprofit watchdog group.

"If it is determined that Rep. Jordan is lying to cover up his failure to protect student wrestlers under his supervision from sexual abuses, the House must hold Rep. Jordan accountable for his lies."

The Office of Congressional Ethics would next need to make a referral to the House Ethics Committee to formally take up the matter.

Jordan has repeatedly denied that he knew about the alleged abuse.

"Conversations in a locker room are a lot different than people coming up and talking about abuse," Jordan said in an interview Friday evening with Fox News. "No one ever reported any abuse to me. If they had, I would have dealt with it. What bothers me the most is the? guys saying these things, I know they know the truth. I know they do."

Jordan's office declined to comment on the call for an ethics investigation but Jordan repeated that he would cooperate with the university's investigation.

"There is an investigation that is going on," Jordan told reporters on Capitol Hill on Monday afternoon. "If in fact there are people who have been harmed, if there are victims, I want them to get their justice."

The pressure is increasing on the congressman as lawmakers are slowly returning to Washington this week after a weeklong recess for Independence Day. Jordan is back at work on Capitol Hill this week, and the House of Representatives formally reconvenes Tuesday.

A group of former Ohio State wrestling coaches defended Jordan in a statement Monday, saying he hadn't heard of any abuse at the university.

"What has been said about Jim Jordan is absolutely wrong," former assistant coaches Rex Holman, Dave Ruckman, Ken Chertow, Myron Kharchilava and Kenny Ramsey Jr. said in a joint statement. "We all worked on the wrestling coaching staff during Jim's tenure at The Ohio State University. None of us saw or heard of abuse of OSU wrestlers. The well-being of student-athletes was all of our concern. If we had heard of any abuse, we would have spoken up."

Several accusers have come forward over the past week saying they were sexually assaulted by Dr. Richard Strauss, a former doctor who died in 2005, under the guise of medical examination. One former Ohio State University wrestler told CNN -- speaking on the condition of anonymity -- that he and his fellow wrestlers would speak openly about how Strauss would shower with the athletes, and how other athletes would comment that Strauss would always "check for hernias," a reference to the doctor examining their genitals.

"Unlike the Olympians who were minor children at the time they were abused, these former wrestlers were adults at the time they claim they were sexually abused by the Ohio State team doctor," the Texas Republican said in a statement. "I personally vouch for the integrity of Jim Jordan. There seems to be an absence of people vouching for the upstanding character of his accusers."

To add to pressure against Jordan, a plane flew over Columbus, Ohio, with a banner that said: "REP. JORDAN HID OSU SEX ABUSE. RESIGN NOW!" The banner was paid for by the Mad Dog PAC.

Claude Taylor, the chairman of the PAC, told CNN they also plan to fly banners over the Cleveland Indians' stadium during games on Wednesday and Thursday.