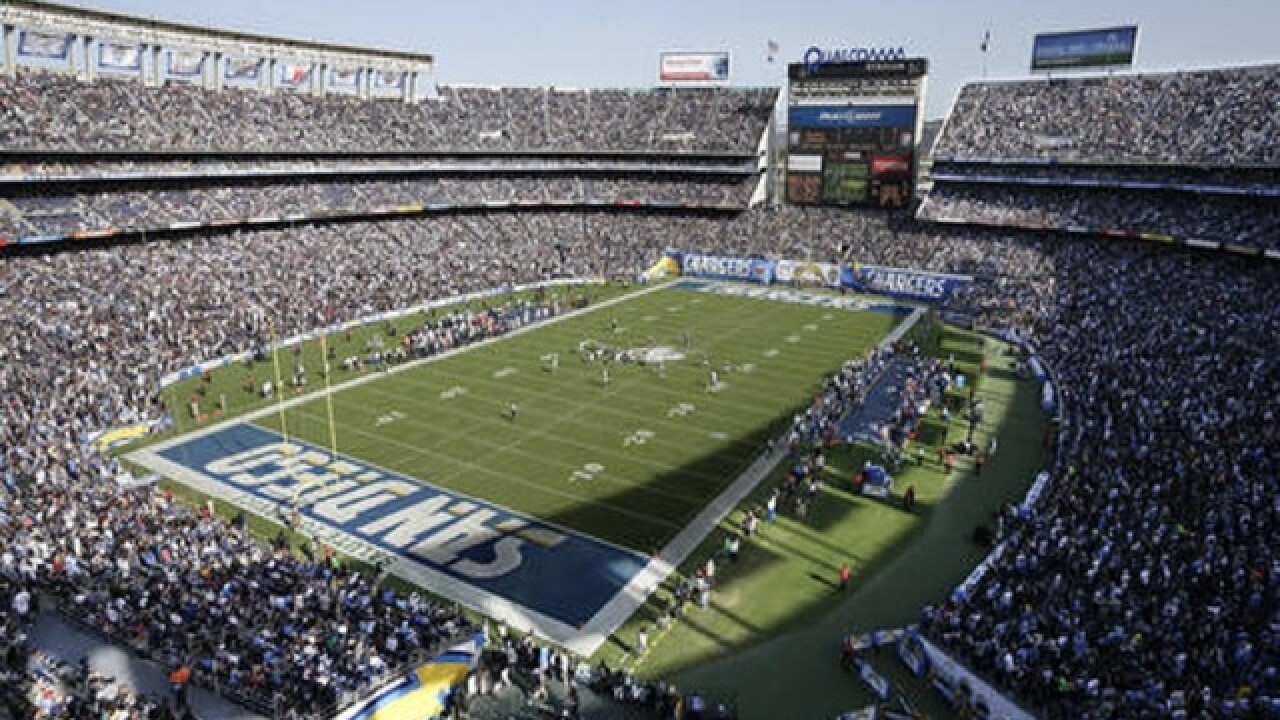 By: Associated Press
Posted at 8:33 PM, Nov 09, 2016
SAN DIEGO (AP) — Voters have called the San Diego Chargers' bluff, leaving the NFL team to decide whether to try one more time to get a new stadium built here or pack the moving vans for the trip up Interstate 5 to Los Angeles.
Measure C, which would have raised $1.15 billion from increased hotel occupancy taxes to help pay for a $1.8 billion stadium and convention center annex downtown, was defeated 57 percent to 43 percent. It needed 66.7 percent yes to pass.
The 110-page plan was written by the Chargers without input from City Hall, the powerful tourism industry, their would-be neighbors the Padres or other stakeholders.
Team chairman Dean Spanos, who angered fans last year with a failed attempt to join with the rival Oakland Raiders to build a stadium in the Los Angeles suburb of Carson, conceded defeat early Wednesday morning with half of the votes still to be counted. He released a statement Wednesday afternoon saying he wanted "to give the stadium debate a rest and enjoy some Chargers football.
"So I'm going to put aside any discussion of our possible next steps until after the season, to allow everyone to focus on football and to give my family and me time to think carefully about what is best for the future of our franchise," Spanos said. "Over the coming weeks you may hear news about steps that we must take to preserve all of our options. But please know that I don't intend to make any decisions until after the regular season ends."
That means fans could be put in the same position as they were last year, when they thought that the last game of the season might be the Chargers' final game in San Diego. The Chargers (4-5) have four home games left, including the finale on Jan. 1 against Kansas City.
Spanos has until mid-January to exercise his option to move to L.A. and join the Rams in a stadium in Inglewood set to open in 2019. If the Chargers moved, they'd have to find a temporary home.
Or Spanos could negotiate with Mayor Kevin Faulconer and other stakeholders on a new plan in San Diego. The Chargers have been trying since 2000 to replace aging Qualcomm Stadium in Mission Valley.
While Spanos has said he'd like to make it work in San Diego, his surrogates have repeatedly reminded people that the team could move to L.A.
Faulconer said that while the vote showed there wasn't support for this particular plan, that a coalition was built during the campaign.
"San Diegans love the Bolts. They want them to stay," Faulconer said. "There's a foundation that I'm confident can be built up."
Faulconer, who endorsed the project only a month ago, said he planned to speak by phone with Spanos later Wednesday or on Thursday.
The mayor declined to say whether he prefers a new stadium at the Qualcomm site, which he pushed last year, or downtown.
Figuring out how to pay for a new stadium "will be one of the significant topics of collaboration," he said. "You saw that achieving two-thirds is extremely difficult."
City Councilman Chris Cate, who was called out by the Chargers because he opposed the measure, said he hopes Spanos comes to the table sooner rather than later.
"I understand the value of the Chargers. I was born and raised here," Cate said. "I don't want them to leave. But it can't be a one sided affair. People have to be at the table to hammer out a deal that works."
County Commissioner Ron Roberts agreed, saying there needs to be "a lot of soul-searching" in coming up with a stadium solution that benefits everyone, not just the team.
"I think this was doomed to failure from Day One and it's unfortunate because if we had been developing a solution everyone agreed on in Mission Valley, we'd likely be under construction by now."
After rebuffing Spanos' Carson project, his fellow owners offered him an extra $100 million to be coupled with a $200 million NFL loan to try to get something done in San Diego.
There's been speculation that Spanos, who long has said he needs a major public subsidy for a new stadium in San Diego, could ask the NFL for more money, or that he could try to negotiate down the L.A. relocation fee.
An NFL spokesman said the league had no comment.
Quarterback Philip Rivers said he's trying to stay optimistic.
"I can't see us not here," Rivers said after practice Wednesday.
"Maybe I'm naive, I don't know that the actual vote is a direct reflection of what the city thinks of the Chargers," Rivers said. "I think it's more about all the ins and outs and exactly what the measure exactly meant and how people felt like it affected them. I didn't see it as, 'Hey, here's a vote; would you like the Chargers in San Diego or not?' I didn't see it as that simple. I would like to think if that's the case, we could have gotten two-thirds or more."
Copyright 2016 The Associated Press. All rights reserved. This material may not be published, broadcast, rewritten or redistributed.