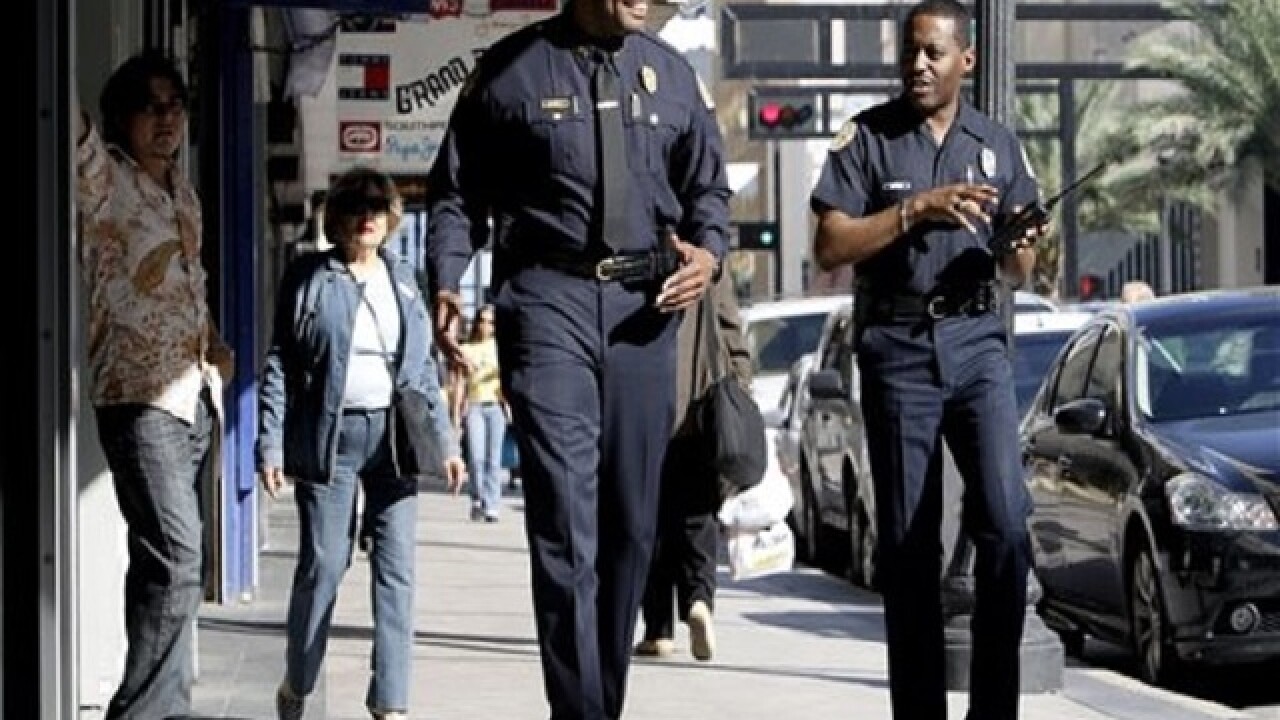 FERGUSON, Mo. (AP) — A veteran Miami police officer with two decades of experience dealing with the media and community leaders will take over as police chief in Ferguson, hoping to help the St. Louis suburb heal as it rebounds after the fatal 2014 police shooting of Michael Brown.
Miami Police Maj. Delrish Moss was announced as chief Thursday, putting a black man in charge of a mostly white department that serves a town where African-Americans make up two-thirds of the residents.
"This has been a long and strenuous process, but we believe Major Moss is the right choice," Ferguson Mayor James Knowles III said in a statement. "We understand the past 18 months have not been easy for everyone, but the City is now moving forward and we are excited to have Major Moss lead our police department."
The 18-year-old Brown, who was black and unarmed, was fatally shot by white officer Darren Wilson during a street confrontation on Aug. 9, 2014. The shooting prompted months of unrest that sometimes grew violent and helped spark the national Black Lives Matter movement.
A St. Louis County grand jury and the U.S. Department of Justice declined to indict Wilson, who resigned in November 2014. But the Justice Department issued a critical report of Ferguson in March 2015, citing racial bias in policing and a municipal court system that made money at poor and minority residents' expense.
Ferguson's city manager, municipal judge and Police Chief Tom Jackson all resigned within days of the report. The Ferguson City Council just two weeks ago agreed to a settlement with the Justice Department that calls for major reforms in the city's criminal justice system.
A news release from the city of Ferguson said City Manager De'Carlon Seewood made the final decision to select Moss.
"Our officers have worked extremely hard to implement community policing and community engagement in their daily practices," Seewood said in the release. "Mr. Moss is the right man for the job to continue those initiatives."
Moss, 51, grew up in Miami's inner-city Overtown neighborhood and as a teenager lived through rioting after white police officers fatally beat a black motorcyclist in 1980.
"I lived in Overtown when it burned. You see things being destroyed," Moss told the Miami Herald in early March. "The people hurt the most are not the police or the businesses outside the area. It's the people who live there. And I was one of those families."
He joined Miami police in 1984, steadily rising through the ranks. He worked for a time in the homicide unit, according to his LinkedIn page, before taking over media and community relations 20 years ago.
The job entails handling the city's media and working with community leaders, particularly in high-crime areas such as the Liberty City neighborhood, according to the department.
After becoming a finalist for the Ferguson job, Moss said he has skills to help heal the Missouri city.
"Ferguson needs a lot of things," Moss recently told the Herald. "It needs a massive recruiting drive to become more reflective of the community. You can't tell me there are no qualified African-Americans in that community."
He was among 54 candidates for the top police job in Ferguson, a St. Louis County town of about 20,000 residents. Other finalists for the job were Frank McCall Jr., chief of nearby Berkeley, Missouri; Mark Becker, a former FBI agent who recently resigned as police chief in East Chicago, Indiana; and Brenda Jones, who was fired as police chief in Pine Bluff, Arkansas, in 2013 but won a lawsuit alleging race and gender discrimination.
Moss was named to Miami Police Chief John Timoney's executive staff in 2009, and promoted to major two years later. The Herald reported his Miami office is filled with plaques of appreciation from city leaders, activists and church elders. He is a member of the NAACP and president of the Police Athletic League, which works with young athletes.
Moss was scheduled to retire from the Miami department in September.
Andre Anderson, a black veteran of the police department in Glendale, Arizona, took over as six-month interim chief in Ferguson in July, and was expected to be a candidate for the permanent job. But he resigned early, leaving Dec. 2. He cited a desire to return to his family in Arizona.
Ferguson's leadership was mostly white at the time of Brown's death. But the new city manager, municipal judge and police chief are all black men. The city has also begun an effort to recruit more black officers to its department.
Associated Press 2016