300 US troops in Philippines through April 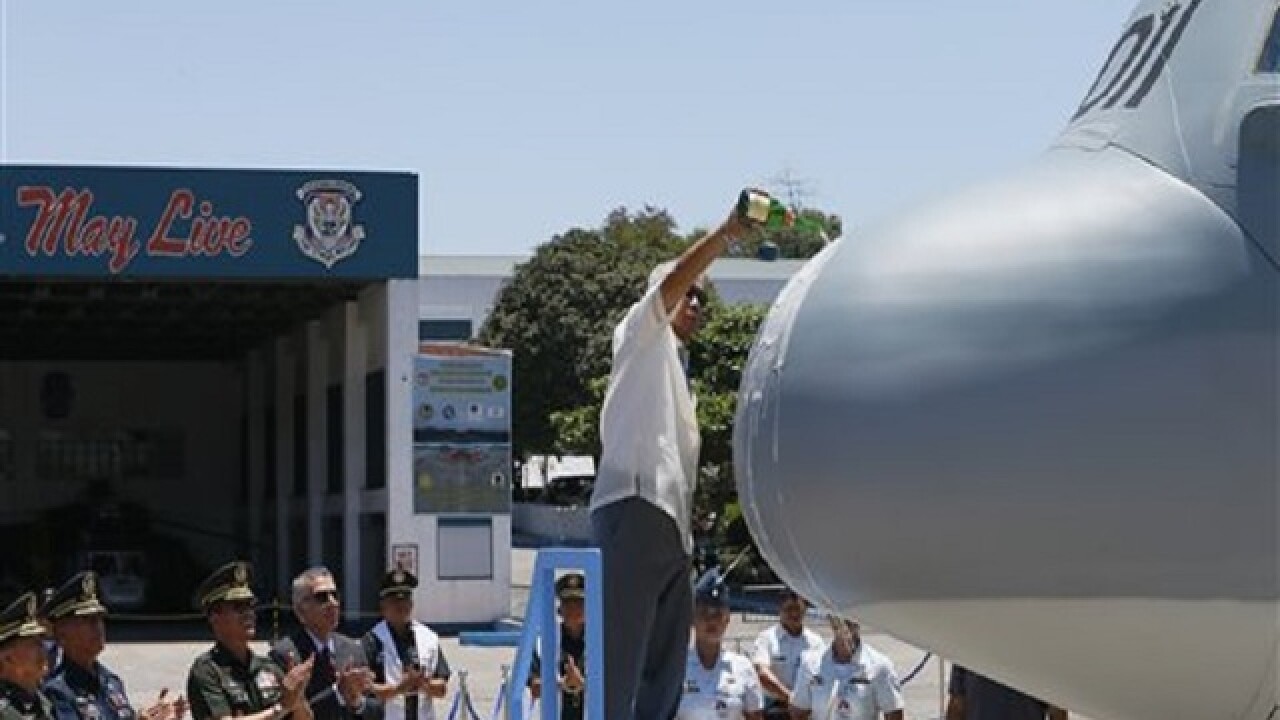 MANILA, Philippines (AP) — In a military buildup certain to inflame tensions with China, the United States said Thursday it will be conducting joint South China Sea patrols — and eventually air patrols — with the Philippines, while dispatching U.S. troops and combat aircraft there on more frequent rotations.

The announcement by Defense Secretary Ash Carter was the first time the U.S. revealed that its ships had conducted patrols with the Philippines in the South China Sea, a somewhat rare move not done with many other partners in the region.

While Carter insisted the U.S. was "trying to tamp down tensions here" and not provoke anyone, Philippine Defense Secretary Voltaire Gazmin — standing beside him at a news conference in Manila — said he expects that U.S. forces, "with their presence here, will deter uncalled-for actions by the Chinese."

While the military boost doesn't include permanent basing for U.S. troops, any increased U.S. military presence and activities in the region is viewed as a threat by Beijing and will likely trigger an angry response.

During the news conference, Carter said the United States will be keeping nearly 300 troops, including Air Force commandos armed with combat aircraft and helicopters, in the Philippines through the end of the month. The U.S. will also increase troop rotations to strengthen training and support increased military operations in the region.

Speaking in the guest house of the presidential complex, Carter said the joint patrols will improve the Philippine's navy and "contribute to the safety and security of the region's waters."

The increase in military support comes just days after a Philippine diplomat asked that the U.S. help convince China not to build in the nearby Scarborough Shoal, which is viewed as important to Filipino fishermen. Philippine Ambassador to Washington Jose Cuisia Jr. said the Philippines is not capable of stopping China from constructing there. China has built man-made islands in other contested spots in the South China Sea.

Charlito Maniago, the leader of a northwestern Philippine village where many fishermen lost access to the disputed Scarborough Shoal after China seized it in 2012, said the joint will spark hope that they can sail freely again to the rich fishing ground.

"This will boost the confidence of our fishermen because they think the U.S. has the capability to defend them," Maniago told The Associated Press by telephone from the coastal village of Cato in Pangasinan province. "The presence of America will make China think twice."

Maniago, however, expressed concern that if China takes a more hardline position because of Washington's increasing involvement in the disputed waters "a dangerous situation may happen and our fishermen may all the more lose the chance to fish in those waters."

According to the Pentagon, the U.S. forces that will remain here are already in the Philippines participating in the Balikatan or shoulder-to-shoulder combat exercises which will end Friday. About 200 airmen, including special operations forces will remain at Clark Air Base, along with three of their Pave Hawk attack helicopters, an MC-130H Combat Talon II special mission aircraft and five A-10 combat aircraft.

This initial contingent will provide training to increase the two militaries' ability to work together, laying the groundwork for forces to do joint air patrols as well as the ship movements.

Also, up to 75 Marines will stay at Camp Aguinaldo to support increased U.S. and Philippine combined military operations in the region.

The troops and aircraft are expected to leave at the end of the month, but other U.S. forces and aircraft would do similar rotations into the Philippines routinely in the future. Carter would not say how frequently those rotations would happen, but called it a "regular periodic presence."

The increased troop presence is part of a broader U.S. campaign to expand its assistance to the Philippines, as America shores up its allies in the Asia Pacific. And it comes as territorial disputes with China, including Beijing's increasing effort to build manmade islands in the South China Sea, roils nations across the region.

The U.S. and others have consistently said the military exercises and assistance packages are not aimed at China but represent America's continued support for its allies in the region.

Last week the Pentagon announced that the U.S. will send about $40 million in military assistance to the Philippines to beef up intelligence sharing, surveillance and naval patrols. Carter said the aid will include an enhanced information network for classified communications, sensors for patrol vessels and an unmanned aerostat reconnaissance airship.

The patrol sensors and surveillance equipment will help the Philippines keep a watch over its territory, including areas where there are overlapping claims in the South China Sea.

The U.S. will also get access to five Philippine military bases to house American forces that will rotate in and out of the country for training and other missions.

Scarborough Shoal is at the center of a case that Manila filed with the Permanent Court of Arbitration, an international panel, in January 2013 after Chinese coast guard ships took effective control of the disputed land following a tense standoff with Filipino ships.

The court has agreed to take the case and is expected to rule in the coming months. Beijing has objected, saying the panel has no jurisdiction in the matter.