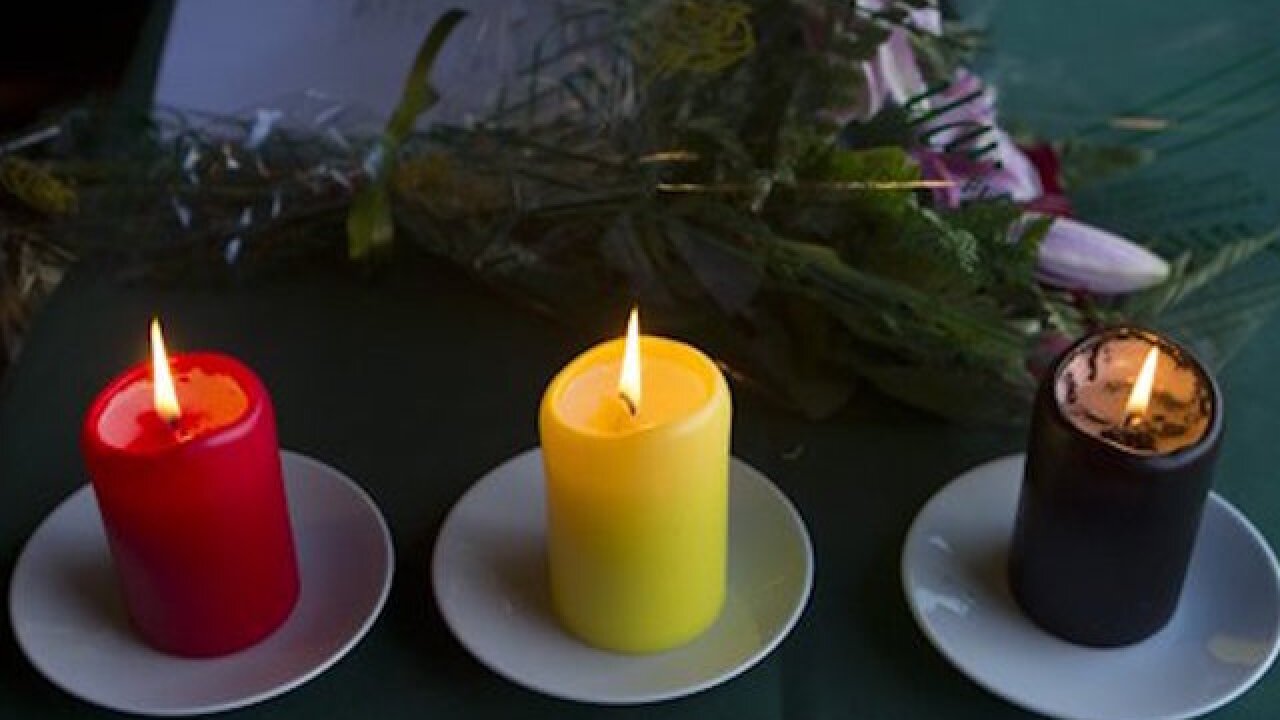 Copyright Associated Press
Paul White
<p>Candles in the colors of the Belgian national flag are lit inside the Belgian embassy in Madrid, Spain, Wednesday, March 23, 2016, a day after Tuesday's deadly suicide attacks on the Brussels airport and its subway system. Spain's Interior Ministry said that for the moment Spain was maintaining its Security Alert Level 4, one step below the maximum. (AP Photo/Paul White)</p>

BRUSSELS (AP) — At least two Americans have been confirmed killed in the Brussels attacks, a U.S. official said Friday, as Secretary of State John Kerry visited the stricken city to express condolences and defended Belgium's counterterrorism efforts against "carping" by critics.

Speaking after meeting Belgian Prime Minister Charles Michel, Kerry said the "United States is praying and grieving with you for the loved ones of those cruelly taken from us, including Americans, and for the many who were injured in these despicable attacks."

Kerry did not offer specific details, but a senior official said the families of two Americans had been informed of their deaths in the attacks Tuesday. The official, who was not authorized to speak to the matter publicly and spoke on condition of anonymity, did not have further details. The bombings killed 31 people and wounded 270.

Visiting the Belgian capital on a hastily arranged stop, Kerry said all governments must consistently improve their strategies to fight terrorism, but maintained that Belgium had made significant improvements over the past year despite failing to stop Tuesday's attacks. He noted that Belgium had actively sought additional assistance and that 10 or 11 FBI agents are now in Brussels helping with the investigation.

Kerry later laid a wreath for victims of the attacks at the airport in Brussels.

Turkey announced this week that it had warned Belgium last year that one of the Brussels attackers, Ibrahim El Bakraoui, had been flagged as a "foreign terrorist fighter." The attacks have laid bare intelligence shortcomings that have prompted European authorities to call for quicker and more efficient cooperation.

"People are jumping to conclusions," Kerry said of critics. "I think they are looking for things that just sometimes are very difficult to analyze in the immediate aftermath of something."

"I don't know what all the circumstances were, I don't know if some events or evidence or opportunities were missed specifically," he told reporters at the residence of the U.S. ambassador to Belgium. "That will come over a period of time, But I think all this carping four days later is a little bit frantic and inappropriate."

Failings in Belgium's record of coordinating intelligence, investigating suspects and controlling its borders have been long known. Mayors in the greater Brussels area complained last year that even when alerted to the presence of suspected radicals in their municipalities, they lacked the power to do anything about it.

After the bombings, Raffaello Pantucci, director of international security studies at the Royal United Services Institute in London, called it "depressingly predictable" that a major attack would occur in Brussels because of "the perfect union" of homegrown, hardened Muslim radicals who possess the tools of terrorism and a law enforcement structure that isn't up to meeting the threat.

French Finance Minister Michel Sapin accused Belgian officials of "a kind of naivete" in ignoring the spread of radical Islam among the country's 650,000-member Muslim population.

Kerry said that prior to the recent attacks, the U.S. and other countries had already scheduled a number of meetings with Belgium about specific improvements they could make to their laws, intelligence collection and attempts to blunt the radicalization of youth in particular.

He said the reason the Islamic State group "is resorting to actions outside the Middle East is that its fantasy of a caliphate is collapsing before their eyes; its territory is shrinking. Its leaders are decimated. Its revenue sources are dwindling, and its fighters are fleeing."

Michel thanked Kerry for his visit, calling it a powerful message of solidarity. "It is very important for us today to receive your support," he said. He offered condolences for the American victims and vowed to step up counterterrorism cooperation with the U.S. and others.

Both said the fight against the Islamic State will be relentless.

"We will not be deterred," Kerry said. "We will come back with greater resolve - with greater strength - and we will not rest until we have eliminated your nihilistic beliefs and cowardice from the face of the Earth."

Kerry landed earlier Friday at the still-closed Brussels airport for his brief visit from Moscow, where he said the attacks underscored the urgency of unity in the fight against the Islamic State.