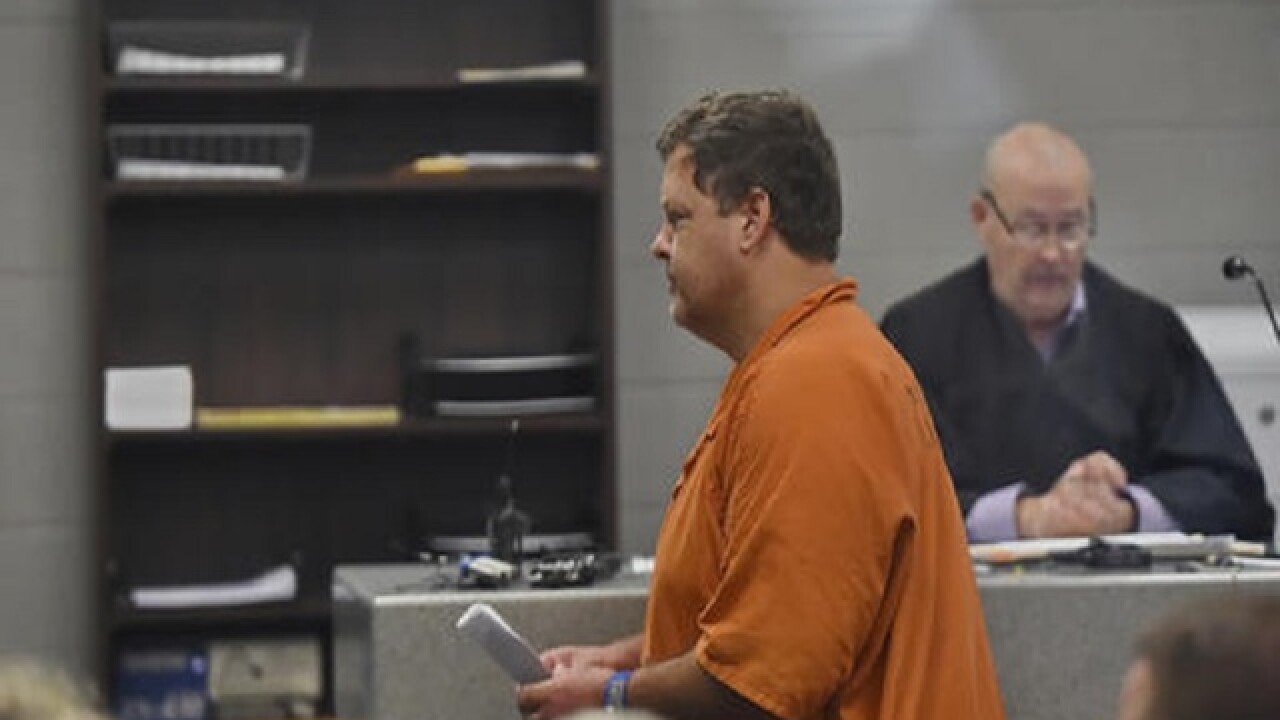 Richard Shiro
<p>Todd Kohlhepp leaves the courtroom of Judge Jimmy Henson after a bond hearing at the Spartanburg Detention Facility, in Spartanburg, S.C. Sunday, Nov. 6, 2016. The judge denied bond for Kohlhepp, charged with a 2003 quadruple slaying and more recently holding a woman captive on his property. (AP Photo/Richard Shiro)</p>

WOODRUFF, S.C. (AP) — Investigators discovered a third body on the property of a South Carolina man who is now linked to seven deaths and the kidnapping of a woman who was found chained inside a storage container, authorities said Monday.
Todd Kohlhepp, 45, became a suspect after the woman was found Thursday chained by her neck and ankle in a metal storage container on his 95-acre property near rural Woodruff.
The body of her boyfriend was found a day later. The couple had been missing for about two months.
The other remains were found near one another Sunday and Monday, and authorities are not sure who they are. Investigators were expected back at the property on Tuesday, but Spartanburg County Coroner Rusty Clevenger said he didn't think there were any more bodies.
"As the coroner, that's all I have been advised of. That was the total number of bodies I was told was on the property. If I am told there are more, I will be back," he said.
Following Kohlhepp's arrest, he confessed to a 2003 quadruple slaying at a motorcycle shop in the small town of Chesnee, said Spartanburg County Sheriff Chuck Wright. He was denied bond Sunday on four murder charges for gunning down the motorcycle shop's owner, service manager, mechanic and bookkeeper.
Wright has said Kohlhepp gave details only the killer would know. His confession came a day before the 13th anniversary of the crime, which many feared would never be solved.
Before his confession, authorities granted him three requests, WSPA-TV reported (http://bit.ly/2fwxkwb). One was to transfer money to a girl Kohlhepp says he's helping raise, to help pay for college. The second was to give his mother a photograph, and the third was to let him talk to his mother.
Kohlhepp is charged with kidnapping the woman, and more criminal counts are expected. He has chosen to represent himself and not hire an attorney, Wright told the Spartanburg Herald-Journal (http://bit.ly/2fyeVOe).
Wright, who was first elected about a year after the Superbike Motorsports killings, is now investigating what appears to be a crime spree stretching over more than a decade.
As a teen, Kohlhepp was sentenced to 14 years in prison in Arizona for binding and raping a 14-year-old neighbor at gunpoint. Released in 2001, he managed to obtain a real estate license in South Carolina in 2006. The search for human remains has now expanded to other properties he owns or used to own, including places outside of South Carolina, Wright said Sunday. He declined to elaborate.
Kohlhepp showed investigators Saturday where he says he buried two other victims on the property he bought two years ago.
"We're not even close" to identifying the remains or cause of death, Wright said. "We can't tell anything."
Kohlhepp did not tell investigators who was buried there. Removing the remains to "preserve every bit of evidence" is a meticulous, time-consuming process, the coroner said.
The gravesites Kohlhepp pointed to are in addition to the body found Friday in a shallow grave at the site. Authorities identified that victim as the boyfriend of the woman found Thursday. Clevenger said he died of multiple gunshot wounds.
The Associated Press is not naming the woman because the suspect is a sex offender, though authorities have not said whether she was sexually assaulted.
Copyright 2016 The Associated Press. All rights reserved. This material may not be published, broadcast, rewritten or redistributed.