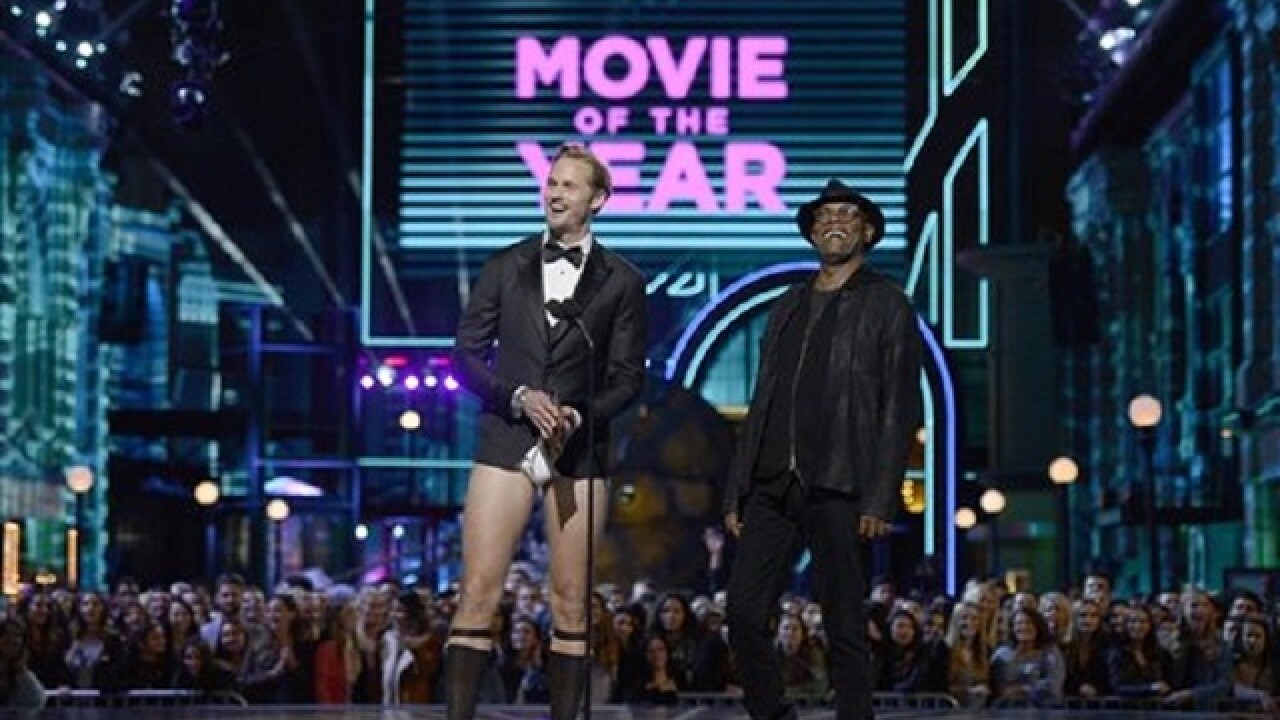 BURBANK, Calif. (AP) — "Star Wars: The Force Awakens" took the top prize at the 25th annual MTV Movie Awards.
The audience at Warner Bros. Studios waved what looked like red and blue lightsabers as star Daisy Ridley and director J.J. Abrams accepted the final golden popcorn trophy at Saturday night's ceremony.
The prize capped off the irreverent awards show, which presents fan-voted film awards and touts upcoming releases.
Dwayne Johnson and Kevin Hart hosted the show, opening it "Mad Max" style by riding through Warner Bros. Studios strapped to the front of a tricked-out truck. Later, they performed a rap song about the year's films that repeated the refrain "Leo got (expletive) by a bear" in reference to "The Revenant."
Will Smith and Melissa McCarthy each received special honors, and their heartfelt speeches were respites of sincerity in an expletive-laden show that featured more F-bombs than awards.
Smith told the audience that he is "dedicated to being a light in this world" when he accepted the show's highest honor, the Generation Award.
"I want to help people," Smith said after being introduced by Queen Latifah and Halle Berry. "I want to be a light. I want to display love. I want to play roles that have dignity. I want to help in this world."
McCarthy, who crowd-surfed her way to the stage to claim the Comedic Genius Award, said that while she is the first woman to receive the recognition, "I am certainly, certainly not the first one to deserve it."
She thanked everyone who buys tickets to her movies or watches her shows. "You are absolutely the single reason I get to keep doing what I love doing so much," she said.
Charlize Theron won the first award of the night: best female performance for "Mad Max: Fury Road." She thanked the film's director, her son, Jackson, and daughter, August.
"The story of 'Fury Road' is in part a story of the power of women and the power to create our own destinies," Theron said as she accepted the award in her daughter's name.
"Pitch Perfect 2" co-stars Rebel Wilson and Adam Devine created an intimate destiny for themselves as they claimed the prize for best kiss, pretending to be overcome with passion and collapsing in an embrace on the stage.
Other winners included Chris Pratt (action performance for "Jurassic World"), Amy Poehler ("virtual performance" as Joy in "Inside Out") and "Straight Outta Compton," which won for true story. Ryan Reynolds won two prizes for "Deadpool": comedic performance and best fight, which he shared with Ed Skein.
Reynolds said he worked for 10 years to get "Deadpool" made, but he added that "it was not all unicorns and cocaine" during production.
The MTV Movie Awards serves as a marketing platform for summer movies. Most presenters were principals from upcoming films, including Keegan-Michael Key and Jordan Peele of "Keanu," out later this month. Theron took the stage with Jessica Chastain and Chris Hemsworth, her co-stars from "The Huntsman: Winter's War." Devine presented alongside Anna Kendrick and Zac Efron — the three star in "Mike and Dave Need Wedding Dates."
Other presenters included Seth Rogen, Woody Harrelson, Emilia Clarke, Common, Kendall Jenner and Gigi Hadid. Ariana Grande, Halsey and Salt-N-Pepa provided musical performances.
The show also included never-before-seen footage from "Suicide Squad" and "Captain America: Civil War." Eddie Redmayne unveiled the world premiere of the trailer for "Fantastic Beasts and Where to Find Them."
Ridley and Abrams accepted the night's top prize from Samuel L. Jackson and Alexander Skarsgard, who co-star in the forthcoming "The Legend of Tarzan." Skarsgard came onstage wearing a tuxedo jacket and no pants, saying: "You got to give the fans a little skin."
The MTV Movie Awards are set to air Sunday on MTV, Comedy Central and other Viacom channels.
Associated Press 2016