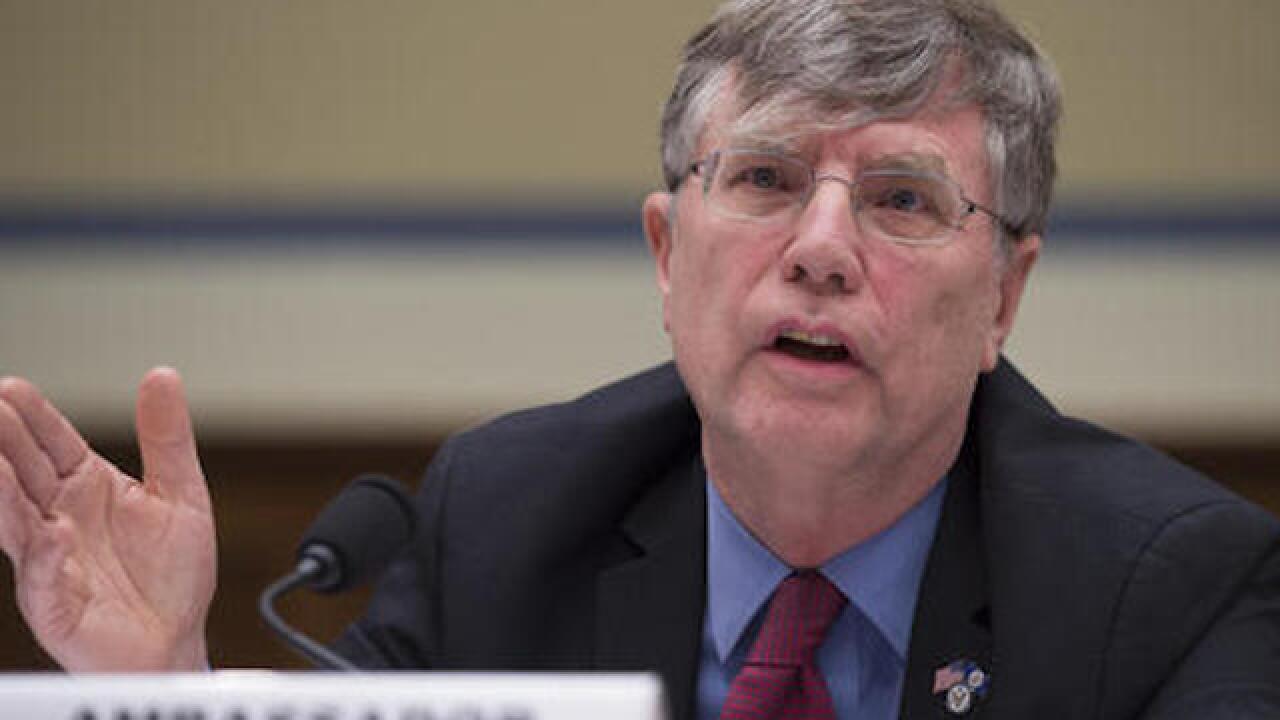 WASHINGTON (AP) — A senior State Department official asked for the FBI's help last year to change the classification level of an email from Hillary Clinton's private server in a proposed bargain described as a "quid pro quo" that would have allowed the FBI to deploy more agents in foreign countries, according to bureau records released Monday.

The FBI ultimately rejected the request, which would have allowed the State Department to archive the message related to the 2012 attacks on the U.S. diplomatic compound in Benghazi, Libya, in the basement of its Washington headquarters "never to be seen again," according to the FBI files.

The email described reports in November 2012 that Libyan police were arresting suspects in the attack. It had been forwarded to Clinton's private email address by Jake Sullivan, one of her top aides and the department's director of policy planning, who was using his government email account.

According to the FBI notes, State Department Undersecretary for Management Patrick F. Kennedy contacted an FBI official whose name was censored. Kennedy was a close aide to Clinton during her tenure as the nation's top diplomat between 2009 and early 2013. In the FBI records, a bureau official said Kennedy "asked his assistance in altering the email's classification in exchange for a 'quid pro quo,'" and that in exchange "State would reciprocate by allowing the FBI to place more agents in countries where they are presently forbidden."

Republicans quickly seized on the report as collusion within the Obama administration to protect Clinton, now the Democratic presidential nominee.

The Clinton campaign did not immediately respond to a request for comment from AP.

The FBI said Monday a now-retired FBI official it did not identify had fielded Kennedy's request to change the email classification and had said it would be considered if Kennedy "would address a pending, unaddressed FBI request for space for additional FBI employees assigned abroad." The bureau said the FBI subsequently investigated the proposed arrangement but did not describe the outcome of that review.

"Although there was never a quid pro quo, these allegations were nonetheless referred to the appropriate officials for review," the FBI said Monday in a statement.

The State Department said Kennedy had been trying to understand the FBI's classification decisions.

"This allegation is inaccurate and does not align with the facts," department spokesman Mark Toner said in a statement. He also said there was never an increase in the number of FBI agents assigned to Iraq as a result of the conversations.

The disclosure was included in 100 pages the FBI released from its now-closed investigation into whether the former secretary of state and her aides mishandled sensitive government information that flowed through the private mail server located in her New York home.

Kennedy proposed using an obscure provision under the U.S. Freedom of Information Act to keep the existence of the secret document from becoming public, the FBI files said.

The provision, known as "B9," is intended to protect geological and geophysical information and data, including maps, concerning wells and is the most rarely used FOIA exemption. In fiscal 2015, the Obama administration cited it only 46 times out of 769,903 information requests. Most of those cases involved the Environmental Protection Agency and the Defense Department.

"Kennedy told (redacted) that the FBI's classification of the email in question caused problems for Kennedy and Kennedy wanted to classify the document as 'B9,'" The FBI report says. "Kennedy further stated that the 'B9' classification would allow him to archive the document in the basement of DoS (Department of State) never to be seen again."

In the end, the FBI did not change the classification level.

The FBI official said that after learning later that the information in question concerned the Benghazi attacks, he contacted Kennedy and told him there was "no way he could assist" with declassifying the material found in the email.

The Associated Press reported the existence of the secret Benghazi-related email in May 2015, though the classified content of the document has never been made public.

At the time, administration officials acknowledged interagency disagreements about whether certain information in the emails was classified, disagreements that the State Department said were contributing to the slow processing of their public release under the Freedom of Information Act.

Jason Miller, a spokesman for Republican nominee Donald Trump's campaign, said the FBI's summary of the conversation "should be distressing for anyone who cares about keeping classified information safe."

"The Clinton campaign must immediately disavow Kennedy and give the American people a full accounting of any communication relating to the request to change the classification levels on certain emails," Miller said.

The Clinton campaign did not immediately respond to a request for comment from AP.