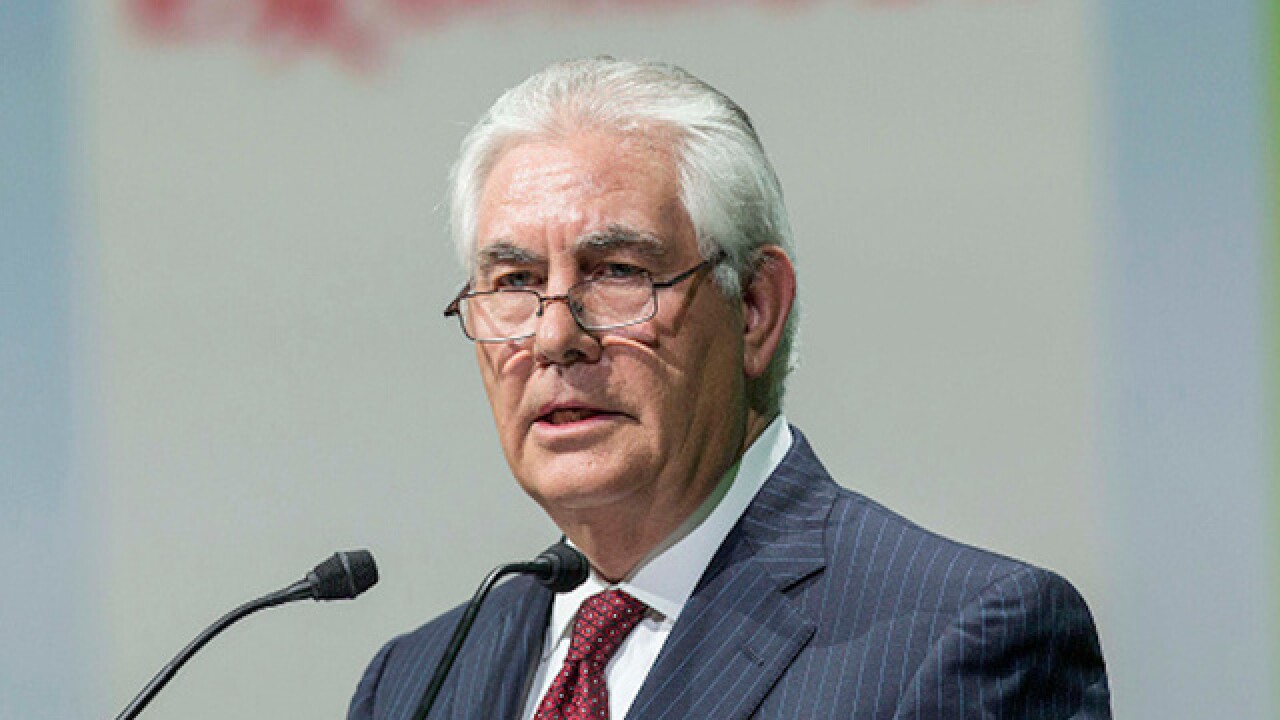 Copyright Getty Images
Christophe Morin
<p>Rex Tillerson, chief executive officer of Exxon Mobil Corp., speaks during the World Gas Conference, in Paris, France, on Tuesday, June 2, 2015. Oil companies that have pumped trillions of barrels of crude from the ground are now saying the future is in their other main product: natural gas, a fuel theyre promoting as the logical successor to coal. Photographer: Christophe Morin/Bloomberg via Getty Images</p>

WASHINGTON (CNN) -- ExxonMobil Chairman and CEO Rex Tillerson is the leading candidate for Secretary of State in a Donald Trump administration, multiple sources familiar with the transition process tell CNN.

The final announcement is expected to be made in the middle of this week, according to a source close to the campaign. A source also said Mitt Romney is still in the running, at the urging of Reince Priebus, who will be Trump's chief of staff.

Tillerson, who met with Trump in New York Saturday, is considered one of the faces of Big Oil globally.

Tillerson has told the President-elect he would be honored to have the job of secretary of state and left Saturday's meeting believing he will be the pick, according to two sources familiar with his thinking.

One said Tillerson was told the President-elect will formalize his choice this week -- as in extend an official offer.

Both sources shared information on condition of anonymity because they are not authorized to discuss the issue for the record. Trump's spokesman Jason Miller tweeted Saturday that there would be "no announcements on Secretary of State until next week at the earliest."

Tillerson was originally considered a long shot to be America's top diplomat, but Trump is reportedly intrigued by the oil man's view of the world.

"He is much more than a business executive. He is a world class player. He is in charge of, I guess, the largest company in the world," Trump told Fox News' Chris Wallace in an interview airing Sunday. "And to me, a great advantage is that he knows many of the players. And he knows them well."

As head of the world's most valuable oil company, Tillerson could be a controversial pick due to concerns about climate change and his ties to Russian President Vladimir Putin.

"Being a 'friend of Vladimir' is not an attribute I am hoping for from a #SecretaryOfState - MR," Rubio tweeted.

Sen. John McCain told CNN on Saturday that he had concerns about Tillerson's relationship to Russia and wants to hear his answers to such during his would-be hearing before making up his mind.

"What about all the other things -- right now, the targeting of hospitals by Russian aircraft with precision weapons in Syria, in Aleppo?" the Arizona Republican asked ahead of the Army-Navy football game. "Those are the kind of questions that we need to ask about the relationship with Vladimir Putin."

In 2011, Exxon signed a deal with Russian oil giant Rosneft to provide access to lucrative oil resources in the Arctic.

Bolton could become the #2 at the State Department, but no offer has yet been extended. The transition wants to announce the secretary of state nominee and deputy as a package deal next week.