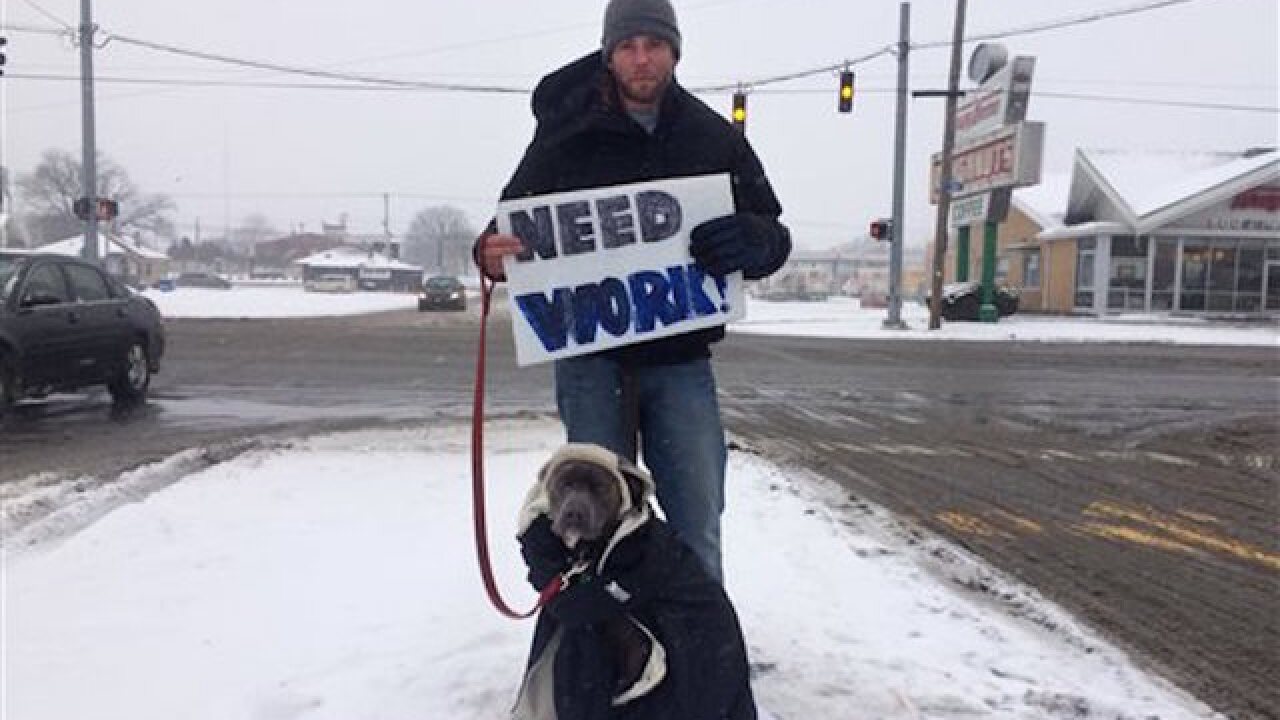 Copyright Associated Press
Claire Galofaro
<p>Shawn Harmon, a homeless man, holds a sign asking for work outside a supermarket in Louisville, Ky., with his dog, Tucker, on Friday, Jan. 22, 2016. Shelters across the region were welcoming anyone during the storm, but Harmon said the local one won't take dogs. And he won't leave Tucker. (AP Photo/Claire Galofaro)</p>

LOUISVILLE, Ky. (AP) — A teenage girl hopped out of a car at a red light as the snow pelted down, and handed a red wool blanket to a stranger.

"God bless you," said Shawn Harmon, who held his dog's leash in one hand and a sign that read "need work!" in the other.

"You two try to stay warm," 19-year-old Michelle Smith told him. She leaned down and rubbed the wet, shivering dog, then hurried back to her car before the light turned green.

Harmon and Tucker, a bluenose pitbull, stood at this intersection for hours, despite the freezing temperatures and a blizzard expected to dump between 4-7 inches of snow in Louisville by midnight Friday. Other parts of the state and East Coast were staring at potentially 2 feet of snow.

Homeless shelters across the region were welcoming anyone during the storm, but Harmon said the local one won't take dogs. And he won't leave Tucker. He needed $20 more for a $75 motel room.

A window rolled down and a man handed him $2: "Good luck, get inside," the man said as he drove away, and Harmon shouted blessings to him, too.

Earlier, a woman came by and gave him a coat through the window. He strapped it around his dog. The hood sagged down over Tucker's snout.

Harmon said he's bi-polar and has struggled for years to hold down a regular job or keep an apartment. He and Tucker usually sleep in a tent.

The snow, and perhaps the kindness, made the day more manageable.

"It just seems a little better when it's snowing," he said, "a little warmer, even though it's not."